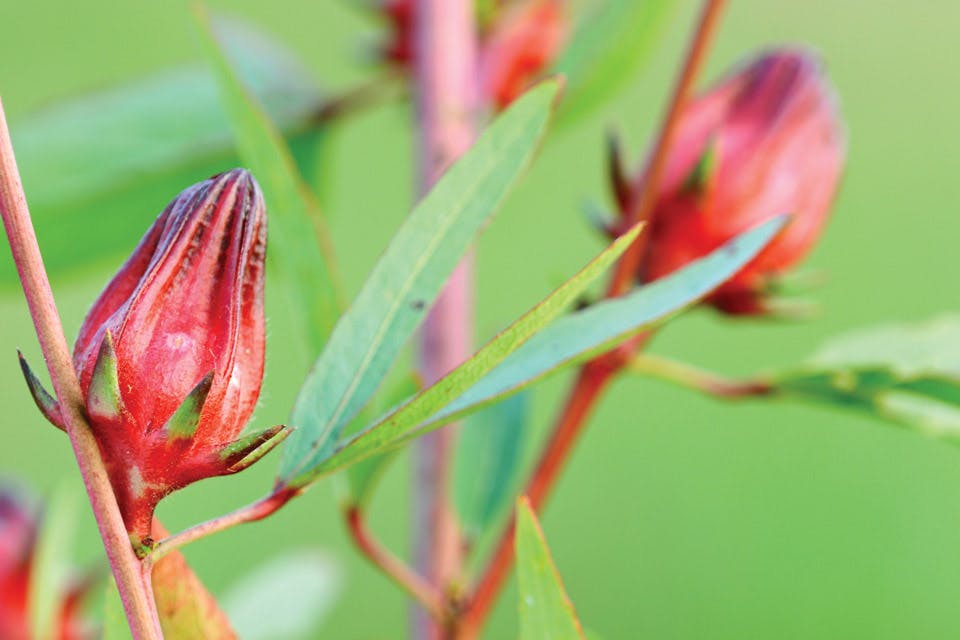 Ohio experts share how to cultivate and use six interesting varieties.

“This isn’t the big Hawaiian plant that you associate with hibiscus,” says Karen L. Kennedy, education coordinator at The Herb Society of America in Kirtland. But roselle, native to tropical Asia, still looks tantalizingly exotic. The herb has several other common names, including Florida cranberry and Jamaica sorrel. Its flowers, which open as yellow and fade to pink, usually last only one day. But when the flower dies, the plant’s brilliant red calyx — the edible, deep red outer cup that encloses the base of the flower’s five petals — enlarges.

Growing Advice: Although it is a challenge, Kennedy says roselle can be grown in Ohio under the right circumstances (think really warm and protected from any frost). She starts her plants indoors before moving them outside. Roselle must be planted in a sunny spot and can be propagated by seed or cuttings.

In the Kitchen: “It isn’t the entire flower of this herb that is generally used but the calyx of the flower,” explains Kennedy. The calyx can be used fresh or dried to make hot or iced tea by steeping it in water and then straining. The tea can then be frozen in an ice cube tray for a creative summery beverage. Kennedy’s recipe for a single serving of Hibiscus-Clove Cooler calls for adding lime slices to a tall glass. Add four to six hibiscus ice cubes and sweetener. Pour cold water over the mixture and add a pinch of cloves. Kennedy also says calyxes can be used to make syrup and jam.

Like their namesake, Geisha garlic chives are elegant, reserved and beautiful. The plant reaches up to 15 inches tall, and although its flavor is discrete and subtle, its appearance is anything but shy. “Garlic chives have wider, flatter leaves as opposed to the leaves of regular chives,” says Kennedy. She adds that garlic chives’ star-shaped florets of garlic are bigger than the lavender-colored globe flowers of the most familiar chives variety. “Their pretty white flowers bloom a little later in the season and attract butterflies.”

Growing Advice:  Because plants can take two years to become worthy, it is often better to divide from an existing plant or buy from a nursery. Easy-to-grow garlic chives prefer full to partial sun. Plant 12 to 15 inches apart in a garden or grow in a container with well-drained soil. The Herb Society of America recommends deadheading spent flowers or else the aggressive, fertile seeds will wander.

“You can’t have a summer garden without basil,” says Kennedy. “I think there is a law against it.” Unlike other basils, Dolce Fresca is a newer variety that maintains an attractive, compact shape and recovers quickly when you harvest it.

Growing Advice: Brooke Sackenheim, manager of Gahanna’s Ohio Herb Education Center, says last summer’s above-average rainfall wasn’t good for home-grown basil. She adds that the plant also doesn’t do well when it’s brought inside and pampered through winter. “I know that upsets people, but it’s true: You can always buy more plants next year,” she says. Basil should be planted 12 to 18 inches away from one another in rows 24 to 36 inches apart. But, as Kennedy points out, you can also tuck a basil plant into a flowerpot on the porch or into a hanging basket. Dolce Fresca loves water but must have good drainage. The Herb Society of America also recommends four to six hours of direct sun.

In the Kitchen: The words “pesto” and “basil” are married, but don’t stop with the popular pasta sauce. Kennedy suggests using basil to season lamb, chicken, roast beef and eggplant. Chopped or whole leaves can also be added to homemade vinegar, tea and oils. “I’d also include desserts,” she says, “like peach-basil sauce for ice cream or shortcake and basil lime ice.”

“Lemon verbena always sells out first at our herb fairs,” says Sackenheim. “It’s almost more lemony than lemon. It just bursts into your nose. It’s so fresh. The Victorians used to tuck it in hankies and at the neckline because of its wonderful scent.” Some people use water scented with the herb’s leaves to wash their hair or to add fragrance to unscented hand creams. Others put the dried herb in drawers to scent linens and clothing.

Growing Advice: Loose, well-drained soil and full sun is all this herb needs to thrive. The Herb Society of America guidelines caution not to over-water, as constantly wet roots will kill the plant. “It is really not a happy cold plant,” says Sackenheim. “And it really likes the light. You will see [an excessively long stem] with not enough light.”

In the Kitchen: Kennedy suggests using lemon verbena whenever you want lemon flavor, including in teas, sorbets and ice cream. “You know how popular fresh fruit in water bottles is right now? You can make a great drink when you just add lemon verbena leaves,” she says. The leaves can be chopped or bruised to release their scented oil. “You can even steep the lemon verbena, strain and freeze in ice cube trays with an edible flower like a violet to add to lemonade or teas.”

Native to the Mediterranean, sweet marjoram has been associated with love and happiness for centuries. “Bridal couples in Greece wore crowns of marjoram, and the herb was also planted on graves for a happy afterlife,” says Sackenheim. The plant grows around 12 inches tall and has clusters of tiny pink and white flowers.

Growing Advice: If started by seed indoors, plants can be moved outside when about 3 inches tall and when frost is nowhere in sight. Cuttings and dividing plants are other methods of starting the herb. Marjoram should be grown 12 inches apart in a garden plot, but it also works well in containers, says Sackenheim. Like many herbs, a well-drained soil is imperative.

In the Kitchen: An Herb Society of America guide notes that plants belonging to the oregano family have been grown in America since colonial times, but their popularity soared when American soldiers returned from Europe with a taste for pizza and Italian sauces. “Sweet marjoram is part of that family, but it’s underrated. People don’t give it enough credit,” says Sackenheim. “It’s warm and spicy — subtle, but with a sweetness.” Use marjoram as a delicate substitute for the more pungent oregano varieties in pasta sauces, lasagna and minestrone soup. Sackenheim says it also adds an unusual flavor to herb bread and relishes.

Fennel, with its hollow stems, yellow flowers and feathery foliage, is sometimes mistaken for dill, while what we commonly call the seeds of this plant are really its fruit. “Fennel seeds were one of the first things I taught my daughter how to harvest,” says Sackenheim. Members of the carrot family, these two varieties can be used interchangeably.

Growing Advice: “Fennel is sowed easily from seed, which is good because the plants don’t like to be transplanted,” says Sackenheim. “But if you sow seeds, you have to thin them [to about 12 inches apart].” Fennel can withstand drought and doesn’t really like shade so give it plenty of sunlight. The Herb Society of America indicates that the herb prefers moist-but-well-drained soil.

In the Kitchen: The seeds have almost an anise or licorice taste (only lighter), and munching a few is said to sweeten one’s breath. The bulb, stalk and fronds are also edible. Sackenheim says she even shakes off the plant’s pollen to flavor honey. “Fennel is good in Italian cooking and is a staple of Italian sausage,” she says. “The fennel bulb can be roasted with beets and vinaigrette, or it can be grated raw into salads. Fennel fronds can also be grilled or smaller pieces used as a fresh garnish.”