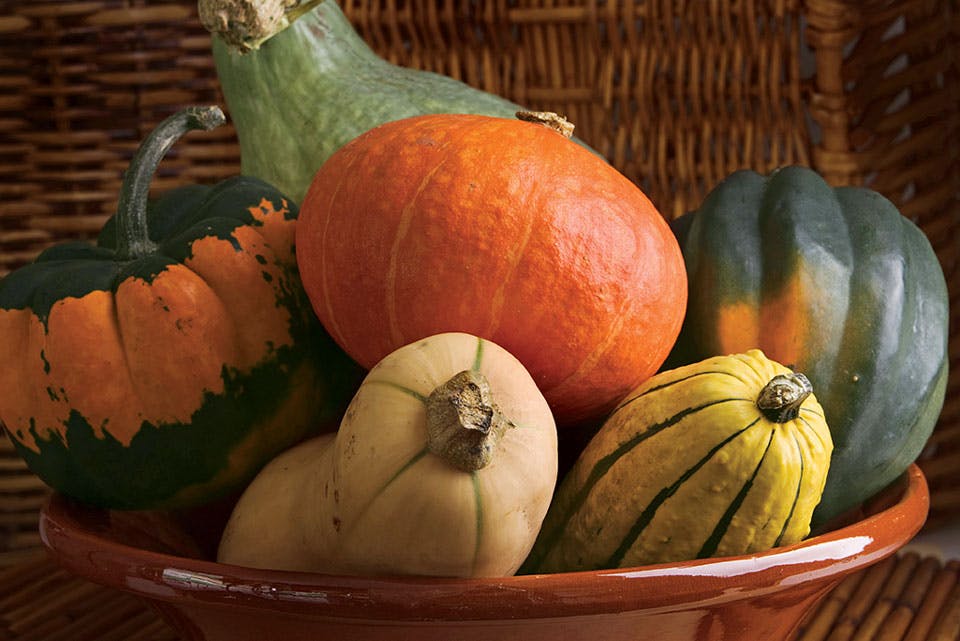 
The orange in that pie might not be the pumpkin you think it is. As Ohio’s biggest purveyor of winter squash, D.R. Walcher Farms owner Ken Holthouse knows his way around both the usual and unusual late-harvest suspects. We asked the North Fairfield-based, fourth-generation farmer his advice for using varieties that’ll help you go beyond butternut this season.

Red Kabocha: This oblong variety has a slightly fibrous texture and is relatively dry and sweet. “A lot of people will make it into sort of a consistency of mashed potatoes,” says Holthouse. Cooking methods vary; after halving and seeding, home cooks can bake, steam or even microwave the squash.

Delicata: This ridged variety is known as the sweet potato squash for good reason. The small, striped delicata needs little more than a good roast to bring out the flavors in its creamy flesh. “Delicata’s my favorite. I don’t even add butter, salt — nothing,” explains Holthouse, who recommends simply slicing, seeding and baking the squash to create a sweet side dish.

Blue Hubbard: This bulbous, pale-blue squash is often used as decoration, but Holthouse sells a smaller version that shines in autumn pies. “A friend of mine brought me a pumpkin pie,” he recalls. “I said, ‘Tell your wife she does a great job with a pie pumpkin.’ He said, ‘That’s not pie pumpkin … that’s hubbard.’ ”

Spaghetti: When opened, this squash reveals an appetizing alternative to pasta. Last year, it was the farm’s best-selling squash. “People are trying to get away from some of the pastas and the carbs,” Holthouse says. When cooked, spaghetti squash’s fibrous flesh comes apart in strings, which pair perfectly with a good sauce.