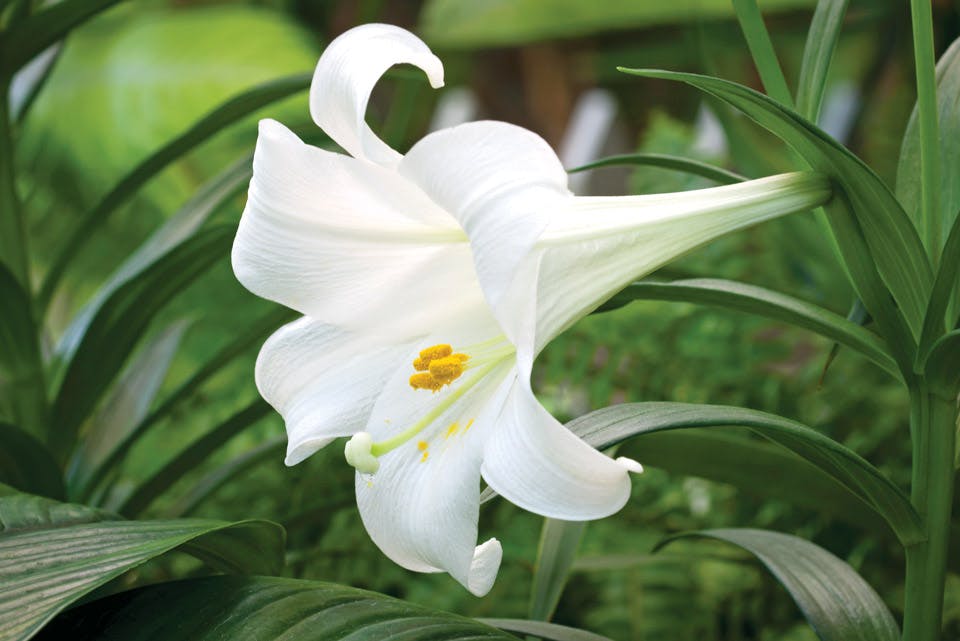 The Easter lily is a symbol of renewal and rebirth, and our state is one of the flower’s leading producers.

Each spring, horticultural workers carrying cups file past the rows and rows of Easter lilies inside Kollman’s Greenhouse in Twinsburg. They’re on a seek-and-destroy mission of sorts, looking for something hidden inside the blooms of the plants’ white, trumpet-shaped flowers.

On such a large scale, it is daunting work by hand. It’s reminiscent of one of those impossible fairy-tale tasks, like when Cinderella is told in the musical “Into the Woods” she must pick up a zillion lentils thrown into the fireplace ashes before she can go to the ball. The workers are searching inside each open flower for the golden anthers — the part of the plant that produces pollen. By removing it with a gentle twist, the plants in the greenhouse won’t become pollinated. Blooms last about six days longer and remain pristine white.

“We try to sell Easter lilies with one or two open flowers and the rest in buds that will open,” explains owner Scott Kollman, who is growing 2,600 Nellie White Easter lilies at the greenhouse this year. “When you get a lily, remove any pollen you see on existing blooms and from those that open later.” (Just be careful while you do it because the dust-like pollen will stain clothing and furniture.)

Kollman bought his Summit County operation in 1971 while he was an Ohio State University floriculture student. Today, he and Sue Kollman, his wife and business partner, have more than 40,000 square feet of greenhouse space. Each spring, their business supplies Easter lilies to clients such as Stan Hywet Hall and Gardens in Akron, the Cleveland Botanical Garden and many churches and country clubs.

Ohio is a leading state when it comes to growing the seasonal spring flower. It was third in both 2012 and 2013 for the number of Easter lily (Lilium longiflorum) producers, behind Pennsylvania and New York, according to the the Department of Agriculture’s National Agricultural Statistics Service.

To many people, the Easter lily is a symbol of purity, hope and new beginnings. For those of the Christian faith, the flower has long been associated with the Virgin Mary. It is also said that white lilies sprang up from the ground where drops of Christ’s perspiration fell during his final hours.

What many people may not realize is the Easter lily is endemic to the islands of southern Japan. That country and Bermuda were once the world’s biggest exporters of the flower. But World War II and a foreign fungal infection encouraged American horticulturalists to develop lily hybrids here.

Larry Diehl, the president of the Ohio Lily Society, says World War I veteran and former USDA employee Louis Houghton helped establish the lily trade in the United States. He was given a suitcase of lily bulbs — including one called White Gold or Croft’s lily, now known as the Easter lily — by an associate from the USDA. After returning home to southern Oregon, Houghton shared his bulbs with his horticulture friends, and the descendants of those plants became valuable when the United States’ imports from Japan were curtailed.

“Since then, extensive research and hybridizing has been done … to be sure they are blooming at the right time, not a few days after Easter,” explains Diehl.

Kollman says the vast majority of Easter lily bulbs grown in the United States today originate from bulb farms near the Oregon-California border, where the climate is most suitable for them.

They present an interesting challenge to growers who must deal with a holiday that has both a changing date and a short display period. Each year, Kollman’s Greenhouse receives bulbs as well as prefinished lilies from larger growers. Some of the plants have already experienced a cooling process, which is vital to their blooming. The plants are then forced by way of a change in temperature to meet the holiday deadline.

Despite those demands, Kollman has developed a reputation for delivering beautiful Easter lilies right on time.

“I have to admit, the Easter lily is not my favorite plant, just because of the timing and work involved and it’s a short season,” he says. “But I realize many people consider it a beautiful flower and to many people, it is spring.”

• Kollman suggests selecting an Easter lily for the home that has blooms in various stages as well as healthy looking green foliage.
• Remove any decorative foil or paper outer wrapping so the plant is not sitting
in water.
• No feeding is required. “But don’t let the plant dry out and keep it away from drafts and excessive heat. Indirect [light] or sunlight is usually OK,” says Kollman.
• After the blooms are spent, the bulb can be repotted for indoor use or planted outdoors after the last frost. Choose a sunny, well-drained spot to plant the bulb about six inches deep and water it well. But Kollman cautions that repeated blooming success doesn’t happen every time with a potted Easter lily. “Enjoy the plant this year,” he says, “and buy another next.”