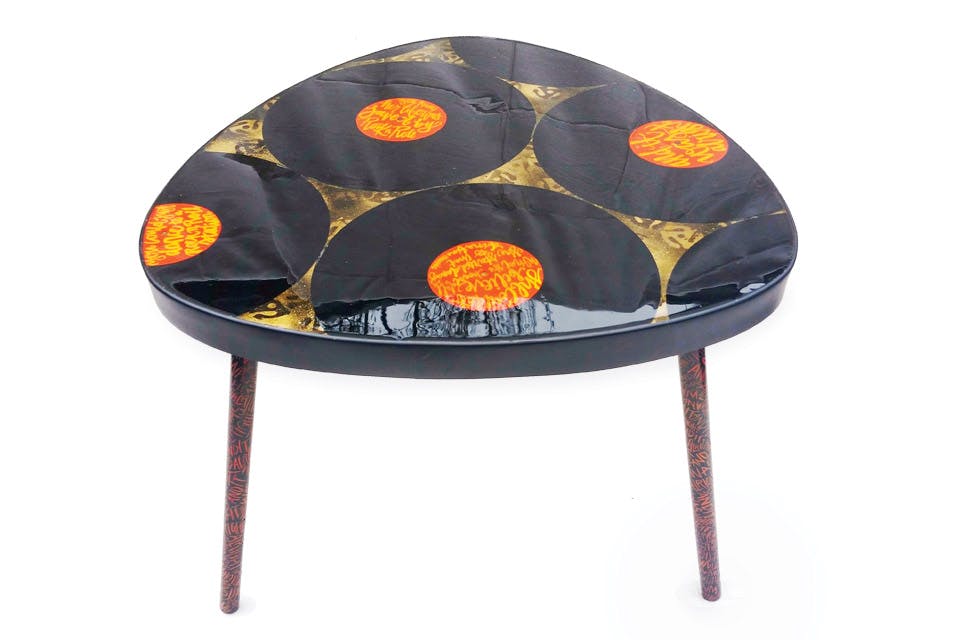 July 2019
BY Linda Feagler | Photo courtesy of Seek and Sought

July 2019
BY Linda Feagler | Photo courtesy of Seek and Sought

Jennalee Cook cranks up “Once in a Lifetime” by the Talking Heads, dons ear protection and approaches her band saw. The Columbus artist is putting the finishing touches on a table featuring an image of David Byrne she made from old LPs purchased at thrift stores and record swaps.

“Records are so big and bulky and get scratched,” she says. “But they are still magic. When it comes to music, they are the original way to hold and connect with these songs, having to listen to the album in sequence and pay attention to when it’s time to turn it over.”

Since Cook launched her business, Seek and Sought — named after her favorite quote, “what you seek is seeking you” by 13th-century Persian poet Rumi — in 2015, she’s happily engaged in creating works of art for music lovers, ranging from picture frames crafted from a collage of 45s to guitars covered in a mosaic of concert-ticket stubs.

The artist’s passion for LPs and music memorabilia was passed on from her father, who spent most of his career on tour as a security director for performers including Paul McCartney and U2. The ticket stubs and passes he’d bring home were precious souvenirs his daughter was determined to preserve, along with the trinkets she began collecting at age 17 while traveling the country attending concerts.

On trash day, Cook scours curbs looking for items she can bring new life to.

“I’m always on the lookout for authentic old records. But if they are still playable, I feel it’s sacrilegious to destroy them ... Cassette tapes are easier to justify because the sound quality deteriorates so quickly,” Cook says.

“So much about what I do is evoking memories,” she adds. “My goal is to convey the feeling of music in everything I make that you hold and touch.”