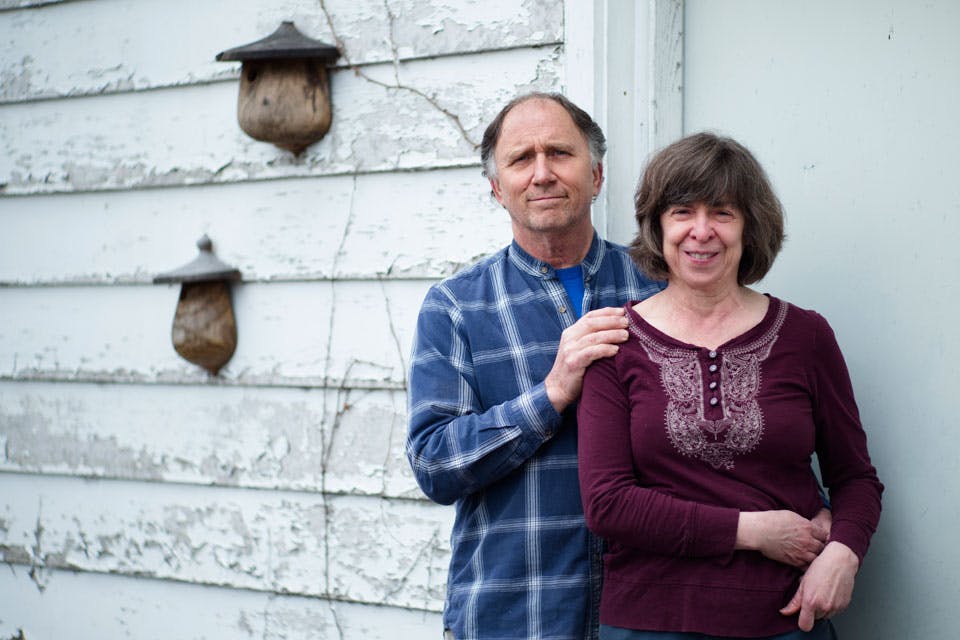 May 2015 Issue
BY Andrew Poulsen | Photo by Joshua A. Bickel

May 2015 Issue
BY Andrew Poulsen | Photo by Joshua A. Bickel

Piles of logs, stumps and branches surround Paul and Deborah Bahm’s home in rural Mount Vernon. Before long, these remnants of fallen trees will get a second chance, as the couple carves them into elegant dwellings for a variety of small-cavity nesting birds or hollows them out to create natural-looking feeders.

The Bahms personally gather the stockpiles of raw materials that dot their property, and every piece the couple collects has a story. “We brake for wood,” explains Deborah. “We are not above stopping the car if we find something we like on the side of the road.”

She and Paul founded Schoolhouse Woodcrafts about 10 years ago, after moving to the sleepy central Ohio town from Phoenix. The couple had grown tired of the big-city lifestyle, where homes were only a few feet apart and the neighborhood had no sense of community.

“Phoenix never really felt like home to us,” explains Paul. “You can pretty much go to any large city like that in the United States, and they have the same stores and nothing feels that different.”

Missing the trees and seasons, Deborah, an Akron native, settled on Mount Vernon after taking many drives through the scenic countryside surrounding the town. After an extensive Internet search, she and Paul found a former one-room schoolhouse that would eventually become their home and company’s namesake. The property also had a township building next door, where the couple hoped to build furniture.

“We moved here without any real plans,” Deborah says. “The whole point of moving to Ohio was to change gears and be more focused on our lives, remembering that our time here is finite.”

While living in Arizona, Deborah worked in the medical field while assisting Paul with their custom furniture business. They built items for the home, ranging from countertops to office desks to decorative boxes used to house big-screen TVs.

Although the couple has more than 30 years experience in building wooden furniture, it wasn’t until they moved to Ohio that Paul decided he could morph his hobby of wood turning — a style of woodworking in which a piece of wood is spun on a lathe as a stationary tool shapes it — into a profit. 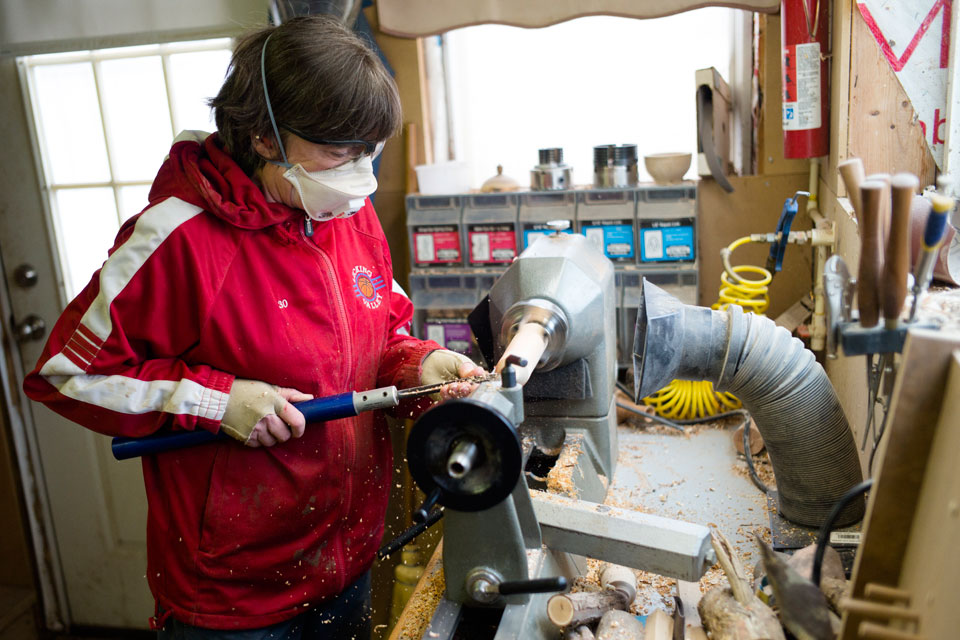 Turning wood was initially Paul Bahm's hobby before he made it part of his business. Deborah Bahm (above) turns some of the business's smaller crafts. (photo by Joshua A. Bickel)


The Bahms began using the woodworking method to make artistic birdhouses after the owner of a store in Millersburg suggested the idea. Although the couple started crafting their signature round birdhouses just 10 years ago, Deborah says the earliest inspiration for the shape dates back decades.

Rachel Carson’s 1962 environmental science book Silent Spring first alerted many to the perils facing bird species. In the 1980s, the Bahms saw an art piece that depicted a rounded birdhouse with a fake entrance hole painted on — symbolizing there would one day be no birds if the environment was not preserved. Its form was the basis for the shape the couple crafts today.

“There are a million guys making bowls and pens,” says Deborah. “If you want to make your own place, it’s fun to find something that no one is doing, and nobody makes those houses.”

What the couple had originally anticipated counting for only part of their business has since become a full-time operation. Schoolhouse Woodcrafts annually sells hundreds of handcrafted birdhouses, feeders, ornaments and fairy houses (little decorative wooden pieces that can be placed in small gardens).

The Bahms travel to more than 20 craft shows throughout the country each year to show off their interesting, acorn-shaped birdhouses, which have a removable top for easy cleaning. It took a couple years to perfect the shape, and the crude-looking first birdhouse the couple ever made still hangs in their workshop.

“Any wood turner worth their weight in salt knows that what endures is the shape,” says Deborah. “You can have the prettiest wood in the world. But if it’s built clunky, it doesn’t please the eye.”

Similar to pottery, the tools used in wood turning give the pieces an inherent roundness that can be manipulated to the artist’s specifications. After making more than 5,000 birdhouses over the past decade, the Bahms are closer than ever to perfecting their craft.

“The first 1,000 were the hardest,” Deborah says, “but they’ve gotten more refined as we go along.” 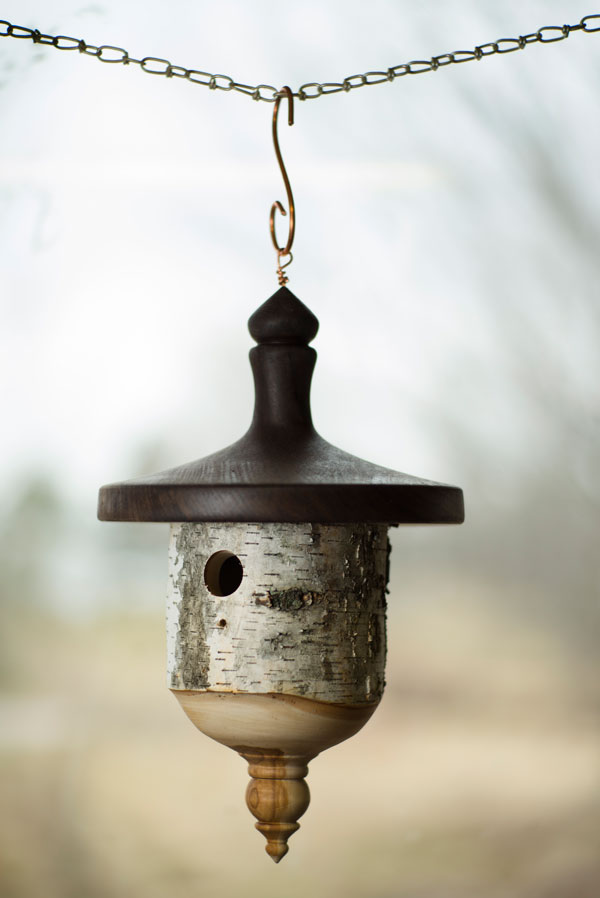 The Bahms began making their artistic birdhouses after the owner of a store in Millersburg suggested the idea. Although the couple started crafting their signature round birdhouses just 10 years ago, Deborah says the earliest inspiration for the shape dates back decades. (photo by Joshua A. Bickel)


The Bahms only use trees that have fallen from storms, decay or other natural processes. The couple has never chopped a live and healthy tree for their art. In order for wood to be usable for one of their birdhouses, the recycled tree has to still be fresh, or green, so the wood won’t crack during its creation — a process that is known as “green turning.” The couple spends a great deal of time scouring local trails and working with a number of sources to find usable wood.

Once a birdhouse is turned and dried, the Bahms coat it with a bird-friendly natural tung oil to preserve its finish. “A lot of people will want to use polyurethane, and the birds just don’t like it,” explains Deborah. “And then they can’t understand why birds don’t come to use their houses.”

The artistic quality of the couple’s birdhouses make them popular home decor pieces, and those who prefer to maintain the integrity of the original shade and texture of the functional creations are best off using them for decorative purposes.

But the houses are the ideal size for attracting small birds, including wrens, chickadees and many others. The Bahms recently began making bigger birdhouses that attract bluebirds and other slightly larger species.

The workload at Schoolhouse Woodcrafts is split down the middle between Paul and Deborah. Paul typically takes on the primary stages of each project, while Deborah handles the later phases. She also works on smaller crafts such as ornaments and furniture for the fairy houses the couple makes.

“Most people I talk to don’t like what they do for a living and wished they did more of what they want to do,” says Paul. “Our hands hurt every day, but I love what I do.”