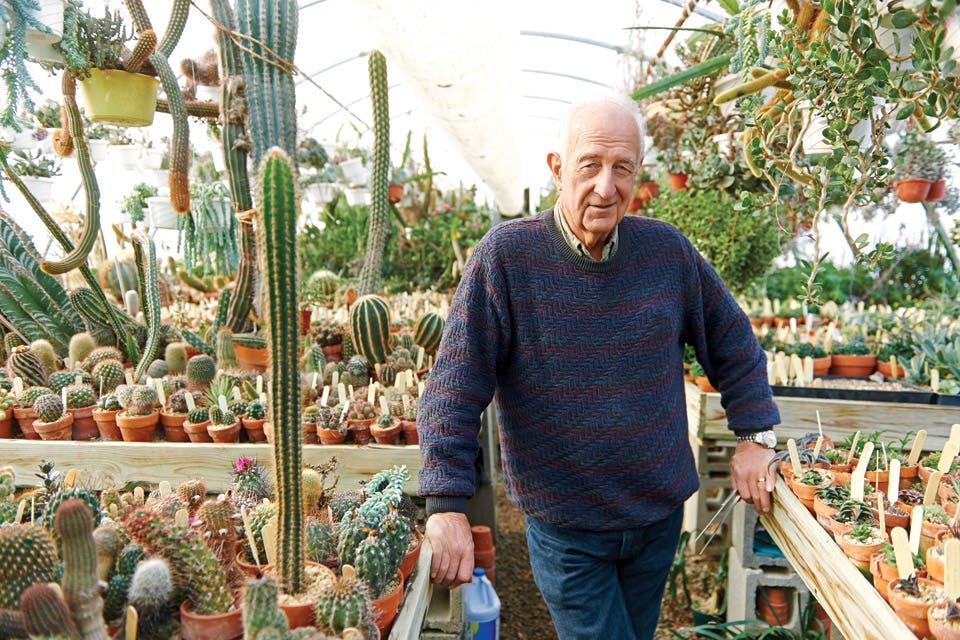 Bill Hendricks’ greenhouse includes more than 4,000 plant species that look a bit out of place in Ohio.

One looks like a brain, another has flowers like a parachute. Some are spiny snowballs, others resemble beautifully colored tooled leather, rosary beads, corkscrews, living stones or giant rat tails.

The cacti inside nursery owner Bill Hendricks’ greenhouse bear common names such as Boston beans, fishhook, elephant’s foot and sea urchin. He points out some of the most bizarre and spectacular from his collection of more than 4,000 cactus and succulent species.

“It used to be right there,” Hendricks says, motioning to a particular spot in his greenhouse. He bought a ponytail palm for $1 in the 1960s, and over the years it grew to between 800 and 1,000 pounds. But it became a safety hazard, and he couldn’t let any of his workers try to move it.

“And anyway, I couldn’t get it out of the greenhouse,” he recalls. “I had to cut it down. It was like the demise of an old friend, and it was very sad. 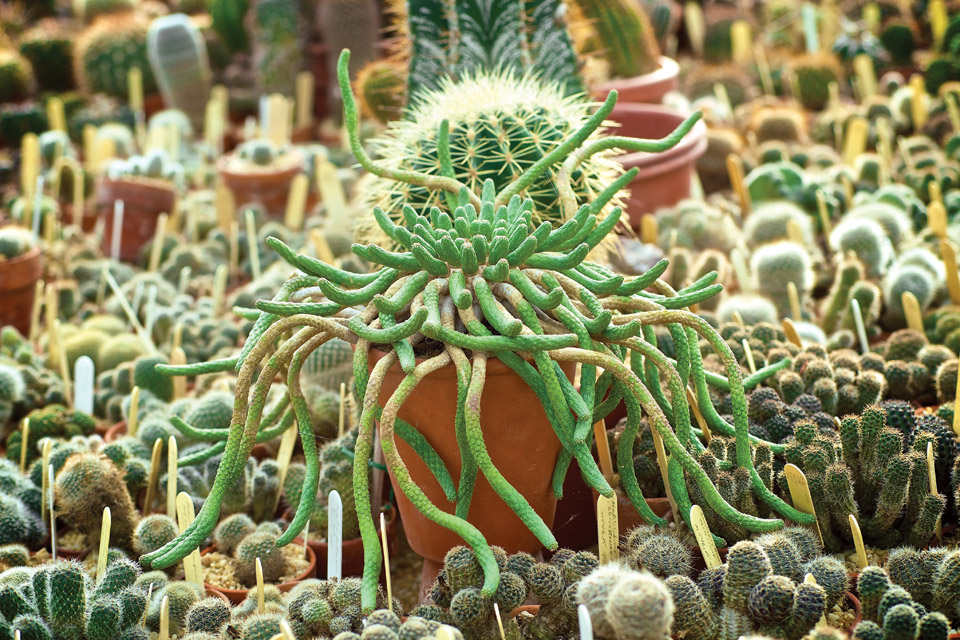 Every plant in Bill Hendricks’ greenhouse has an ID and a database that tracks where and when each plant was acquired. (photo by Jason Miller)

Hendricks, president of the Midwest Cactus and Succulent Society, still feels pain for destroying such a magnificent plant. (The Society is an affiliate of the national Cactus and Succulent Society of America, whose members are interested in the study, collection and cultivation of cactus and succulent plants.) He now lives by this creed: “When plants get too big, make cuttings. Or get rid of them.”

Because cacti generally grow slowly, most won’t ever become a thorn in the side of collectors. Most people usually start small, growing a cactus on a windowsill or in a terrarium. Some concentrate only on cacti. Others also adopt other types of succulents — plants that store water within their leaves, stems or roots.

Many spine lovers in colder climates prefer varieties that must be grown indoors. But others also grow the hardy outdoor kind, including Ohio’s only native cactus, the eastern prickly pear (Opuntia humifusa). According to Hendricks, the cactus is found naturally in only two places in Ohio: the prairie of northwest Ohio between Castalia and the Oak Openings Region and a prairie habitat in Adams County by the Ohio River.

Collectors such as Hendricks marvel at the huge variety of shapes, sizes and colors. And collecting exotic cacti is a good excuse to spend time inside a balmy greenhouse during Ohio winters. 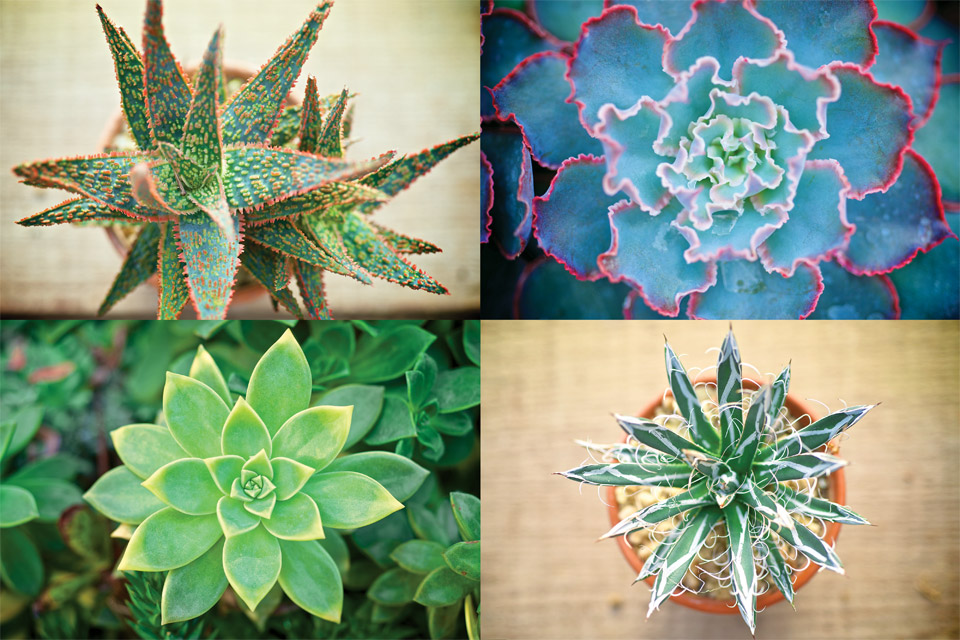 For Hendricks, collecting cacti was inspired by his grandfather, who had three cactus species and another succulent growing inside the small greenhouse at his Maple Heights home. “By the time I was three, I was helping him re-pot plants,” says Hendricks. “I still have a piece from all four plants.”

By age nine, Hendricks was a cactus collector. When his aunt and uncle took a road trip out West, they brought him back “one of those little six-piece boxed cactus sets.” He still has two descendants from those cacti he received in 1952.

Hendricks first added to his collection with purchases from local dime stores. During high school, he worked at a truck farm and could afford to order cacti from catalogs. He also began collecting cactus and succulent reference books and now owns about 1,600 volumes. Both his cactus collection and his personal library now rival many of those owned by botanical gardens across the nation.

“I spend my weekends in the greenhouse whenever I can,” says Hendricks, who is the president of Klyn Nurseries in Perry. “Cacti are the perfect plants for someone busy like me. Sometimes I don’t get in here for a couple weeks, but they are just fine.” 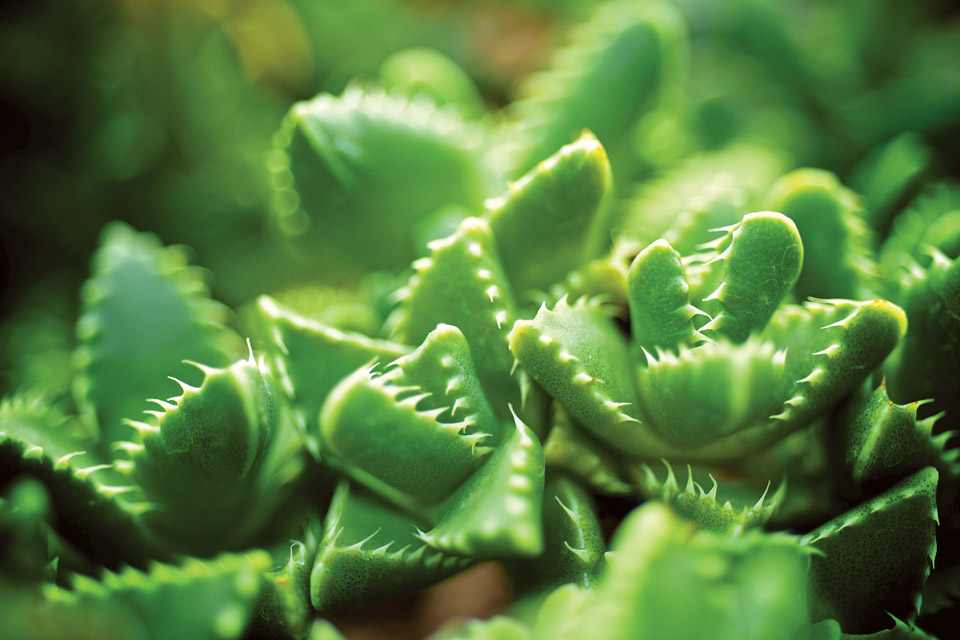 His unmarked cactus greenhouse stands among rows of white Quonset hut-shaped structures at the wholesale nursery that Hendricks took over in 1986. The nursery grows about 500 acres in field production and 40 acres of container plants, selling to smaller nurseries, landscapers and municipalities. But the cacti aren’t part of the business and this greenhouse is Hendricks’ private domain.

The thousands of plants can look overwhelming. But Hendricks knows the exact location of each and maintains a computer database of when and where it was acquired. Every pot has an ID tag.

Hendricks, who does not collect from the wild, has traveled to Mexico, South Africa, Central America, Asia and America’s Southwest to see cacti growing. On one excursion, he observed a native sedum growing on the Great Wall of China. On a trip to the Soutspanberg mountain range in South Africa, he climbed 1,000 feet just to find and photograph Anacampseros. The small, pretty cactus forms rosettes of leaves and has flat, pink to purple flowers.

Hendricks is particularly fond of Rebutia (small globe-shaped cacti with red, yellow or orange flowers), Echinopsis (ribbed cacti with white, pink, red, yellow, orange and bicolor flowers) and Lobivia (globular cacti grown as a single stem or in clumping mats with long-lasting flowers), all from South American grasslands. He also favors Haworthia, South African succulents with diverse species that can include triangle-like leaves and flat-topped “windows” for filtering sunlight. 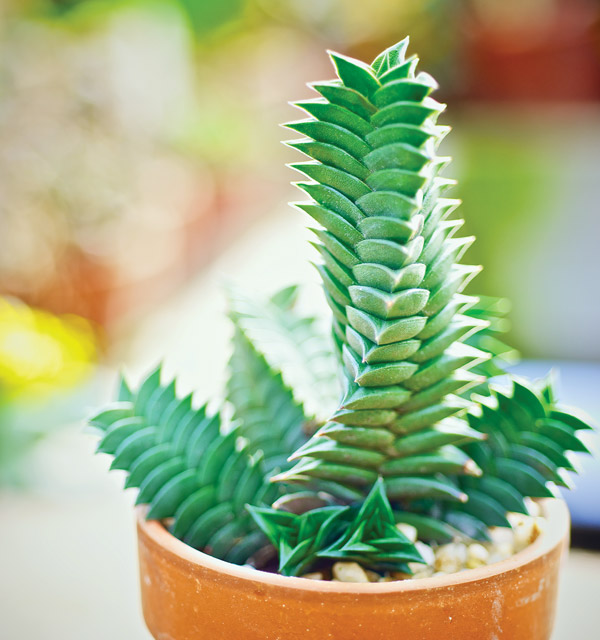 The collector, who lectures throughout the Midwest and the East, also hybridizes cacti, including a beauty he named Orange Crush, an Echinopsis hybrid. But Hendricks shies away from formal botanical recognition, experimenting with his plants for sheer curiosity.

“I have just always loved plants and I have a photographic memory for their names,” he says. “There isn’t a day when I don’t have something blooming in the greenhouse. Plants are pieces of art.”

For more information about the Midwest Cactus and Succulent Society, visit mwcss.com.

WEB EXTRA: Check out Bill Hendricks’ advice on growing cacti indoors and outside, as well as his suggestions for varieties that do well in Ohio.