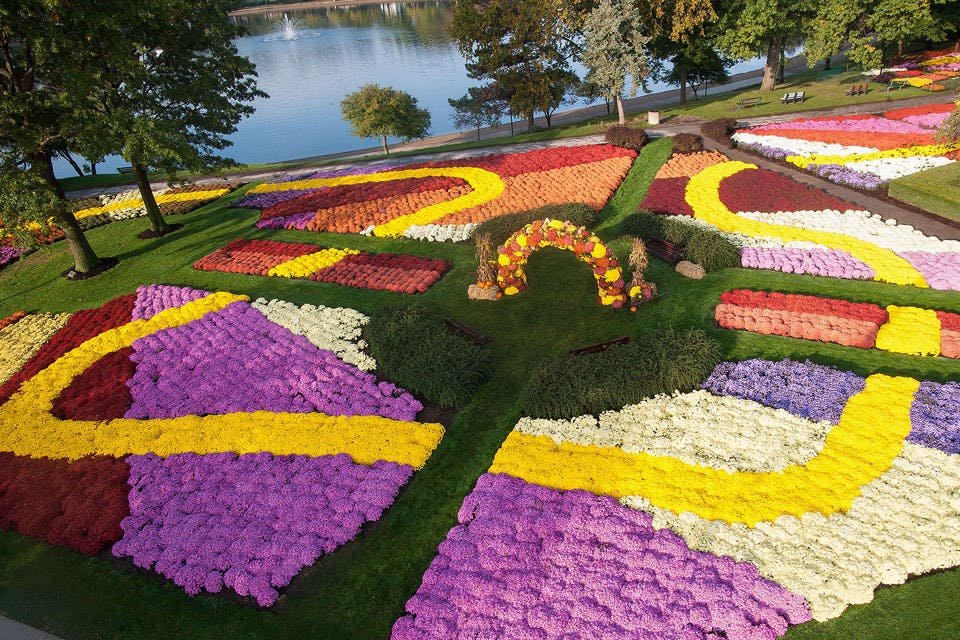 The mum offers a burst of color each autumn, a fact that’s celebrated annually in Summit County and across Ohio.

It all began as a celebration of the city’s centennial. Twenty-five years later, Barberton’s Mum Fest has grown into a horticultural showcase featuring swirls of color, wave-like designs and beautiful patchwork arrangements.

The free weekend celebration, set for Sept. 26 and 27, has grown to include water skiing and canoe races on Barberton’s 10-acre Lake Anna, but the mums are what keep people coming back.

This year, 11,000 cuttings representing 28 varieties were planted in June and early July to form the festival’s elaborate floral displays. After each arrangement is designed, festival co-founder and horticulturist Bill Aulenbach is charged with selecting the correct mum varieties for the required colors and blooming times. Some of his favorites include Hestia Hot Red, because it holds its color and fades very slowly, as well as Elena Gold, which boasts a reliable, dark yellow hue.

“Many mum varieties have women’s names,” explains Aulenbach. “Parents love to sit their little girls down next to the plants that bear their name.”

For many, mums are the flowers of football games and homecomings, of pinned corsages and festive floats. Blooming August through early November, they provide one of the last blasts of summer floral color.

The chrysanthemum, with its original golden hue, was first cultivated in China as early as the 15th century B.C. Legend has it the flower’s boiled roots were used as a headache remedy, and its leaves were brewed to make a festive drink.

The flower made its way to Japan by the 8th century A.D. There, it was considered a bloom fit for royalty — so much so that the crest and official seal of the emperor bears a single, 16-floret chrysanthemum. The flower appeared in Europe in the 17th century and the United States during colonial times.

A member of the Compositae (or Asteraceae) family, mums grow in a variety of shapes and are composed of either ray florets, which look like petals on a daisy, or disc florets, which resemble the center in a daisy-like bloom.

According to the National Chrysanthemum Society, the mum is America’s largest commercially produced flower due to the ease of cultivation, ability to bloom on schedule and diversity.

Tyler Gogolek, owner of Tyler’s Farm in Oberlin, is one of Ohio’s chrysanthemum growers. He began cultivating the flower in his grandparents’ yard in Middleburg Heights nearly 20 years ago. Along the way, he’s become a master grower. In 2012, he won first place for the Biggest Belgian Mum in North America in a contest sponsored by GroLink, a national wholesale plant nursery. His winning entry was 37 inches wide and 27 inches tall.

When he started his business, mums were Gogolek’s first choice because the flower can grow outdoors, and he didn’t have access to a greenhouse at the time. He and his wife, Kara, now sell mums to grocery stores and nearby farmers markets, providing bursts of brightness as our summer plantings inch closer and closer to fall.

“This time of year, everything in your garden is dying, dead or will soon die from frost,” Gogolek says. “But then you get these mums and there is this pop of color. It’s amazing. It changes everything.”