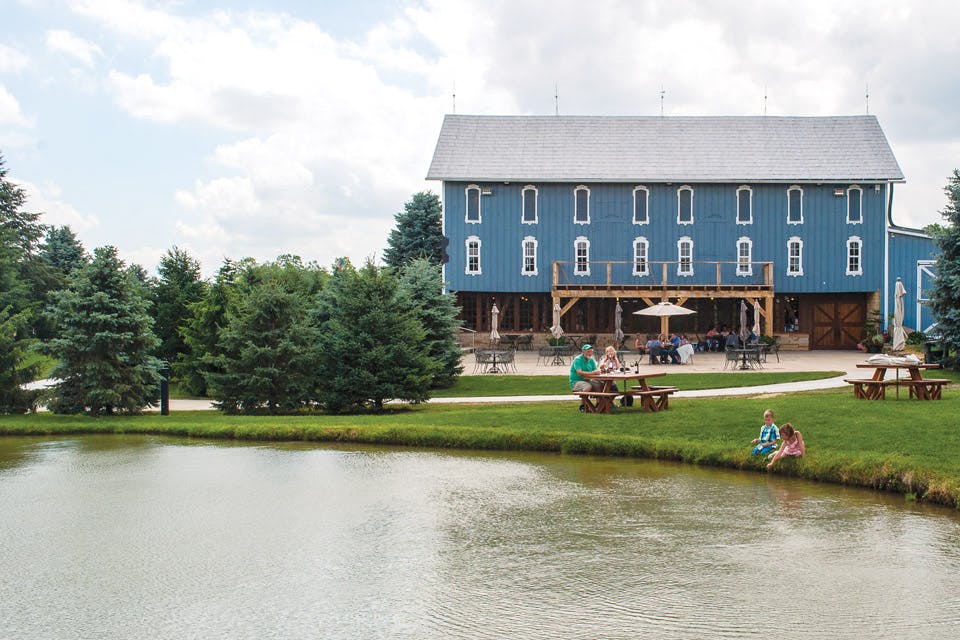 Brett and Marcia Urian’s historic barn dates back to the years following the Civil War. Now it’s home to the couple’s winemaking operation.

South of Wooster, state Route 3 turns into one of those scenic byways where the views of rolling hills can stretch a dozen or so miles. Still, even with this gorgeous panorama to distract you, it’s not easy to drive past the Blue Barn Winery without taking notice because, well, it’s blue.

The barn’s original owners chose the unusual shade of Union Blue for the structure, which was built just after the Civil War, to reflect their pride following the North’s victory in the conflict. The handsome hue still adorns the barn today thanks to its current owners, Brett and Marcia Urian. In 2015, the couple gave the historic barn — complete with a pressed tin roof and five lofty lightning rods — new life as a winery.

Situated next to a pretty pond fed by an artesian well and the Urians’ rambling brick farmhouse that dates to the 1830s, the winery’s outdoor patio offers both incredible vistas and bucolic bliss.

“People tell us once they sit down here, they never want to leave,” Brett Urian says. “We hear that over and over.”

The interior of the winery is equally inviting. A wall of windows that once were French doors helps pull the outside into the rustic space, which features Amish-made paneled walls bedecked with all manner of antique tools: scythes, rakes and others whose use can only be guessed.

The winery’s large bar with stained glass highlights had a previous life in Erie, Pennsylvania, and a separate sitting area with couches and chairs is popular with couples looking for privacy. The century-and-a-half-old door to the outside was imported from Italy, and you can spot fossils on the slate floor. (See if you can find one of a fern near the room’s entrance.)

The Urians came by winemaking almost by accident. Following extensive renovations to the barn after a wall collapsed, the couple considered converting the structure for retail use. But their neighbor, Andy Troutman of Troutman Vineyards, suggested they turn it into a winery, knowing that having multiple wineries in an area draws more visitors than just one.

Although initially hesitant, Brett began taking winemaking courses online and at the University of California-Davis. He discovered he not only had a knack for the process but also thoroughly enjoyed it.

Blue Barn Winery began by producing two wines: a semidry red and white. Sweet red and white wines arrived the following spring. Brett hopes to perfect very dry red and white versions later this year, and next year he will start producing ice wine using the edelweiss grapes growing on trellises next to the barn.

In September, a new rosé wine will make its debut at the winery. To honor his many Amish neighbors who were instrumental in renovating the barn and who still work in the vineyard for the Urians, Brett is calling the new wine Rumspringa, named for a period when Amish adolescents are allowed to explore life outside their faith before joining the church.

To make sure the name wasn’t offensive, Brett ran it past his Amish neighbors to see what they thought.

“They just laughed like heck and then told me it was a good name,” he recalls.

They were also tickled by the logo — an Amish girl playing an electric guitar.

Blue Barn is only open on weekends and hosts live music on Saturday evenings. Brett and Marcia make it a point to be on hand while the winery is open so they can interact with their customers. They are frequently asked about the intricacies of winemaking, the old barn and their personal stories. They get a sense their guests appreciate the chance to spend time with the owners.