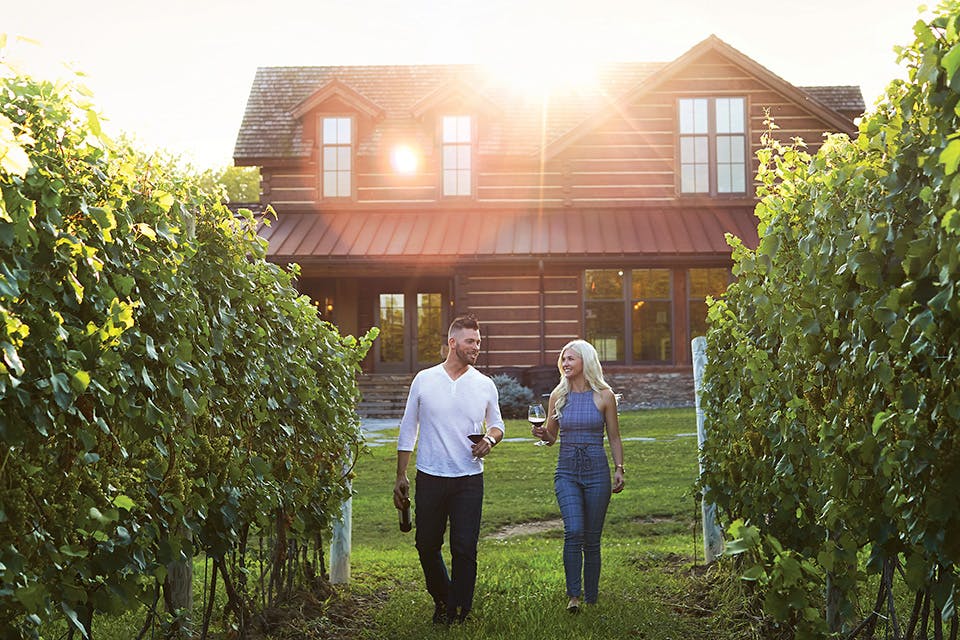 4 Ohio Wineries to Visit this Fall

Embrace the harvest season and our state’s agricultural heritage by stopping in for a tasting at these four spots with beautiful vineyards.

As a Madison native and a geologist, Gary Blackie was well aware that Ohio’s Grand River Valley is fertile ground for growing grapes. About a decade ago, while living in Texas, he and his late wife visited northeast Ohio and were impressed with the quality of the local wines. Then, a later trip to Idaho with his brother, Leonard Blackie, solidified his interest in growing grapes.

With the first vines planted in 2011, Gary and Leonard opened the doors to Laurentia Vineyard and Winery in 2015. Fittingly, the name is a nod to the ancient geological core of North America.

“That area is where the glacier stopped and formed a terminal moraine that overlooks Lake Erie,” Gary Blackie says. “So in the summer, the lake has a cooling effect, which is critical for grapes. It’s warm during the day and cool at night.”

Today, Laurentia Winery has 45 acres of vineyards, growing grapes for chardonnay, riesling, gewürztraminer, pinot gris, pinot noir, cabernet sauvignon, cabernet franc and more. With a production of 2,500 to 4,000 cases per year, winemaker Sarah Mullins is always turning out 100 percent estate wines and experimenting with new ideas, like aging riesling in oak. The winery, designed in a style evoking a chic hunting lodge, is the perfect place to take in the fall colors and grape-harvesting season, while sipping on your favorite white or red. A variety of artisanal cheese boards, shared plates and flatbreads change seasonally. 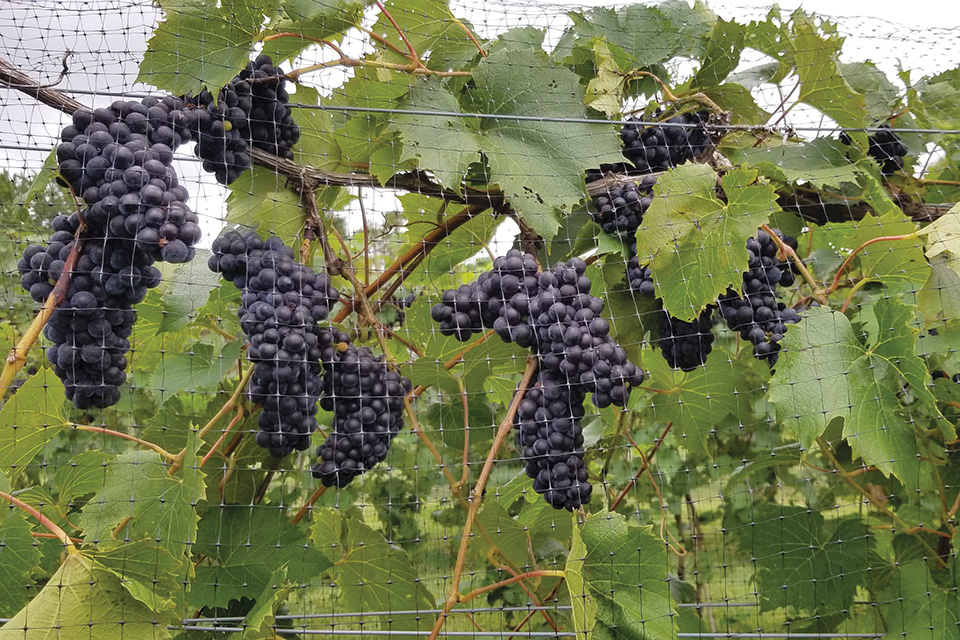 Covering 17 lush acres in Fairfield County, just southeast of Columbus, Rockside Winery & Vineyards beckons visitors to stop in for a glass, bottle or tasting. Winemaker Robin Coolidge Jr. and his wife and vineyard manager, Valerie, sought to create a comfortable environment to enjoy wine while learning more about it.

The Coolidges also own Wyandotte Winery in Columbus, but the couple purchased Rockside Winery in 2014 to expand their passion into grape growing. They tend to roughly 5 acres of vines, including the native American Niagara and French-American hybrids like petite pearl.

The wines are all made on premises and many are estate wines — meaning the wine is made entirely with the vineyard’s own grapes and bottled on-site — although they also bring in varieties from elsewhere in Ohio, Washington state and other wine-producing regions.

“We’ve chosen to grow grapes that we know will do well here,” Coolidge says. “It gives us a very unique set of grapes many people aren’t familiar with that we can make wine out of for a truly Ohio style.”

Try Rockside Winery’s Rose Window, a Steuben rosé, to get a taste of that Ohio flavor.

“It has a light color, a great berry flavor and it doesn’t really have any tannin,” Coolidge explains. “It’s just a little bit sweet.”

The team at Rockside Winery & Vineyards has one rule for wine: “Drink what you like.” The goal is to demystify the wine-drinking experience for guests through tastings and occasional winery and vineyard tours throughout the fall. Rockside Winery also serves local beer and whiskey and offers small bites and wood-fired pizzas.

“[During normal times] we like to pour the wine and talk to you about the wine — what it tastes like, smells like and where it’s grown,” Coolidge says. “We try hard not to make people feel intimidated about coming in to have a glass of wine.” 2363 Lancaster-Newark Rd. NE, Lancaster 43130, 740/687-4414, rocksidewinery.com 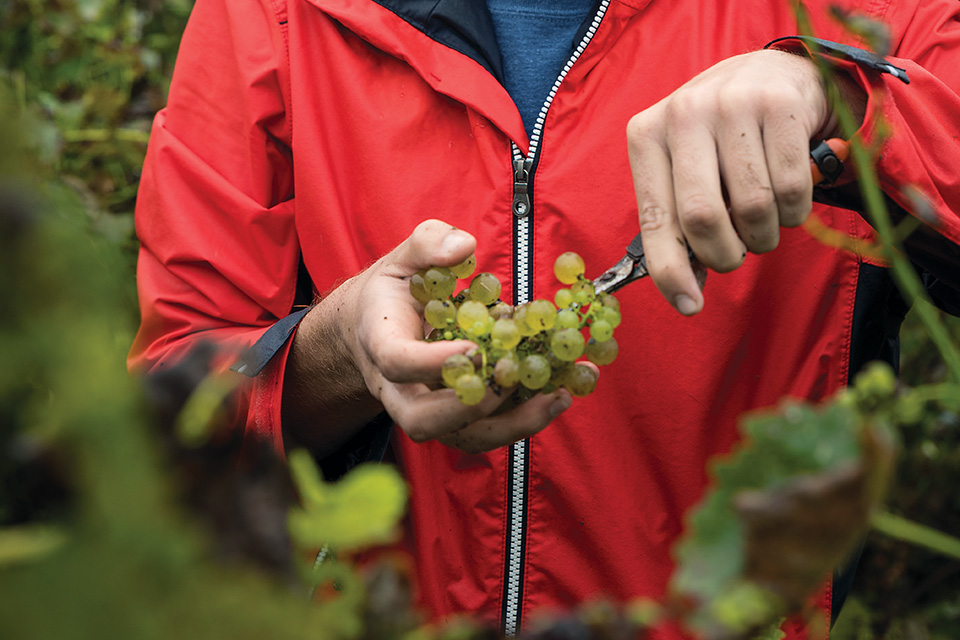 Escape to southeast Ohio to unwind amid the show-stopping fall foliage of the rolling hills. Shade Winery, located just outside Athens, was established in 2004 and opened the doors to its cozy, lodge-style winery in 2010.

Owner Neal Dix describes himself as a “hobbyist who fell into good fortune,” having met grower and winemaker Louis Jindra, who mentored him in viticulture. Since then, Shade Winery has expanded to a 2,000-vine operation that harvests as many as 10 tons of grapes a year, including vidal blanc, cabernet franc, cabernet sauvignon, chardonnay and experimental rows of merlot and petit verdot. Dix also buys grapes from other destinations in Ohio, California, Oregon and Washington.

“It’s very grapefruity without the grassiness,” he explains, suggesting that visitors pair the wine with the chef’s special: scallops with lemon caper pasta or any of the other American-with-a-touch-of-Italian dishes on the winery’s full menu.

Though the food and wine is the highlight, visitors can embrace the hospitality and relaxed, secluded atmosphere. Shaded outdoor seating is available, including a wraparound porch with views of the vineyard and a patio featuring an outdoor fireplace. 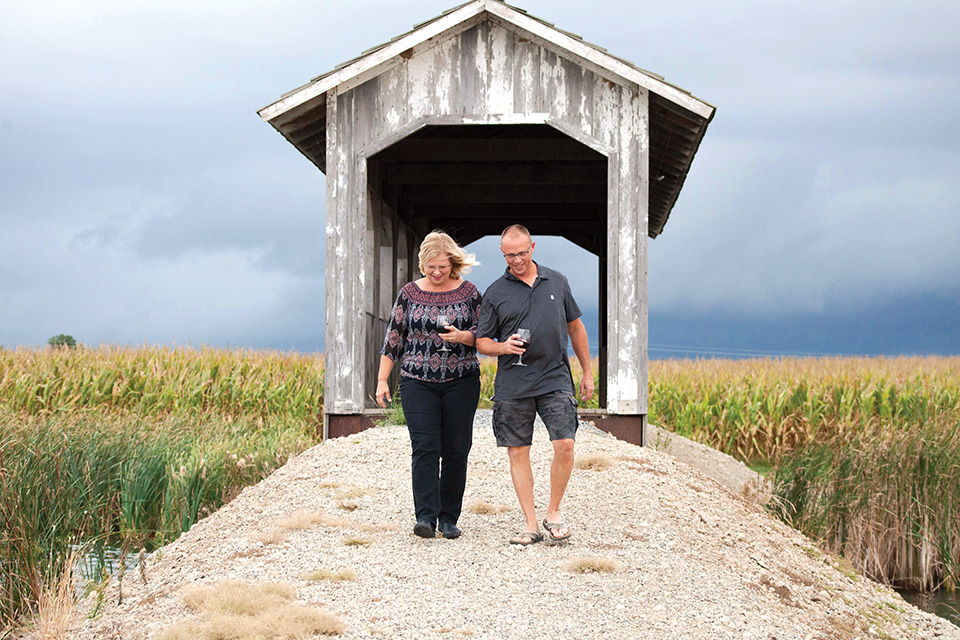 Country charm abounds at Sycamore Lake Wine Co. in Putnam County. A bridge made of reclaimed barn wood is a favorite vignette for casual selfie takers and professional photographers alike, as is the blue ’51 Ford pickup that’s on display.

“It’s really pretty in the fall,” says Janice Hanneman, who owns the winery with her husband and winemaker, Jeff. “A lot of our customers love to stroll through the vineyard and visit our bridge.”

The Hannemans were both working in offices when they began making wine on the side. After purchasing the property, which features a picturesque 17-acre lake and 3 acres of vineyards, the couple opened the winery in 2013.

Eight varieties are grown at Sycamore Lake, including chambourcin, seyval and diamond. To supplement their own harvest, the Hannemans also source grapes from New York and other areas, but when it comes time to make the wine, Jeff does it all in-house.

Family is infused in Sycamore Lake Wine Co.’s operation, notably in the names of the wines. Miss Lilly, a semi-sweet blush blend with hints of cherry, strawberry, citrus and peach, is named for the Hannemans’ granddaughter, Lilly. Red Dirk Road, a soon-to-be-released red, honors Janice and Jeff’s grandson, Dirk.

With its friendly atmosphere, family feel and live music, Sycamore Lake Wine Co. has become a local favorite. The kitchen also serves up a small appetizer menu that includes flatbread pizzas, dips and a meat and cheese tray.

“We’re unique in the area because we have live entertainment on the weekend, but we close at 8 o’clock,” Janice Hanneman explains. “We get people up and dancing, and then we’re done at 8, and if people want to continue their night, they head out and do other things.” 9660 Mayberry Rd., Columbus Grove 45830, 419/233-1581,
sycamorelakewineco.wixsite.com/winery