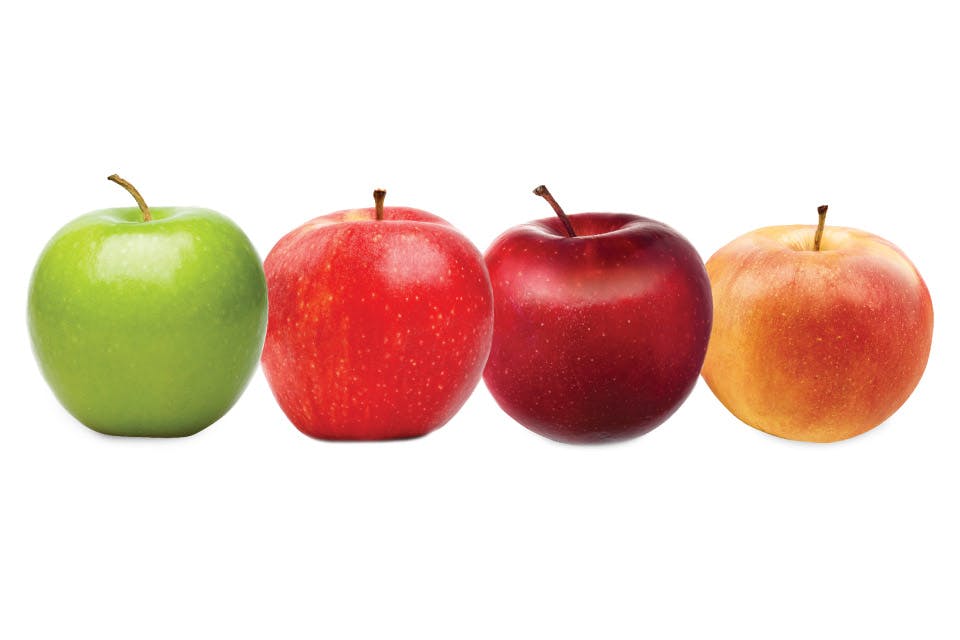 While shopping for pumpkins, don’t forget to pick up some late-season apples. Terry Gram of Arrowhead Orchard shares how to use four varieties he grows.

Apple season in the Buckeye State begins while warm breezes still blow, but as the calendar flips to October, Ohio’s orchards promise locally grown varieties that are great for baking or eating fresh. Terry Gram, co-owner of the 85-year-old Arrowhead Orchard in Paris, Ohio, talked with us about some of the popular late-season apples he grows and how to use them.

Granny Smith: Discovered in Australia by Maria Ann Smith in the 1860s, this bright green apple is famous for its tart flavor, making it a great choice for baking apple pies. The Granny Smith is harvested in the last weeks of October, and Gram says the tangy flavor also makes for a great eating apple. “It is popular with the local schools,” he says. “Kids like a sour tart apple, and they like the green color.”

Fuji: Developed in Japan in 1962, the Fuji apple is a cross between a Red Delicious and a Ralls Janet apple. With a reddish/green hue, the Fuji is a popular choice for eating fresh because of its sweet flavor and its long shelf life when stored properly. “Just take a damp cloth and put it on top of your apples so they will store a lot better in your refrigerator,” says Gram. “It keeps them from drying out because all your new refrigerators are frost free, and what that does is take the moisture out of your produce.”

Rome Beauty: An early American apple, the Rome Beauty has a deep-red skin and was a favorite apple in the days before refrigeration because of how well it could be stored during the winter. “It was one of the last ones to pick before the Fuji, Granny Smith and Braeburns came along,” says Gram. Although not known for being a great eating apple, the Rome Beauty holds up well when cooked, making it a good option for classic apple dishes such as pies and dumplings. “It is a red apple that is kind of mild with a slight tart to it,” Gram says.

Northern Spy: This American heirloom apple has been a late-season favorite since it was developed in New York state during the 1840s. With a mildly tart and sweet flavor, the Northern Spy is a good choice for baking, eating fresh or making cider. The only downside to the Northern Spy is it bruises easily. “That’s why you don’t see it in your commercial grocery store,” Gram says. You’re most likely to find the apple at an orchard or farmers market. arrowheadorchard.com