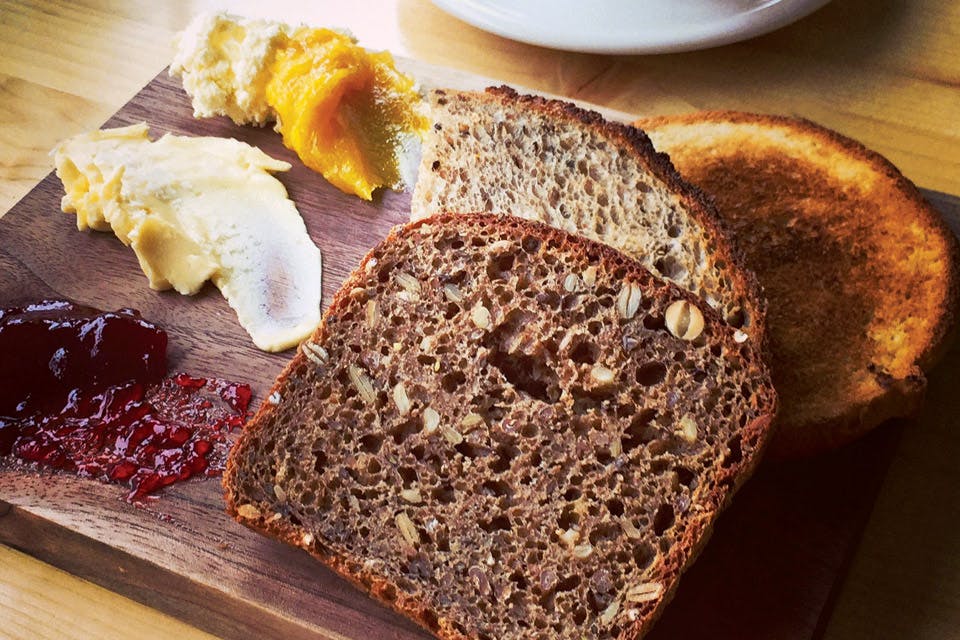 Loaves of all different shapes and flavors fill the racks behind the counter: heirloom grain, fruit and nut, a sunflower flax. Dan Riesenberger mans the oven at Toast Bar, a cafe located inside his Columbus bakery. For those who can’t settle on just one variety, Riesenberger has a solution.

Diners choose from the lineup of four to five daily breads and a rotation of jams and butters that include almond butter, apple butter and a decadent chocolate hazelnut spread. Three thick slices arrive on a wooden board along with the customer’s choice of spreads.

“We make our own lemon curd, and we source this really great cream cheese from Laurel Valley Creamery,” Riesenberger says. “That’s one of my favorites. ... On the country sour, [it’s] a really good combination.”

Riesenberger started baking as a hobby, after a coworker in the kitchen at Columbus’ North Star Cafe gave him a sourdough starter. After attending a farmers market with a few loaves and returning empty-handed, he realized he may have a knack for kneading and slowly worked his way into bigger venues.

Since 2014, he’s been manning his Columbus shop and sells primarily as a wholesaler. In November of that year, he began opening the place on the weekends as Toast Bar.

“It had a little, couple-hundred-square-foot, front-end retail room that wasn’t renovated. We saw some potential there,” says Riesenberger, who took inspiration from similar concepts in San Francisco and Chicago. “It allows us to feature the breads and highlight them in ways that people don’t expect.”