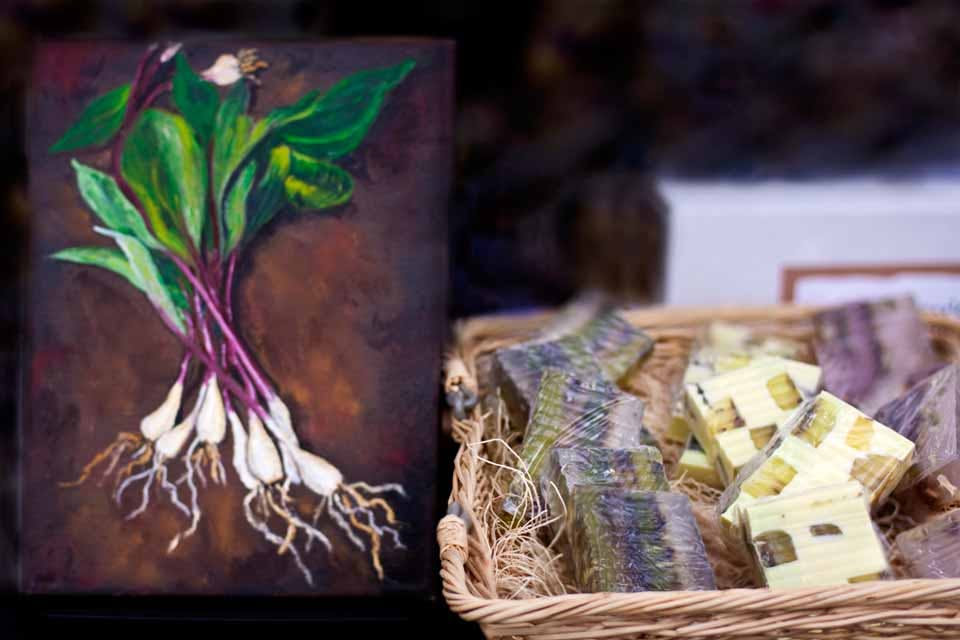 Our state's spring wild onion has long had a fervent following among those who love it. The northeast Ohio village of Peninsula celebrates it every year.

This story ran in the April 2014 issue of Ohio Magazine. The 2020 Ramp Up Peninsula festival has been canceled.

One Sunday, about eight years ago, Donald Carroll and several of his hiking friends were walking through a deep Ohio woods — the kind with a shady forest floor already green with early spring vegetation — when one of his companions bent down to take a closer look at a plant with broad, smooth leaves.

That was the first time Carroll, who was born in Rhode Island and raised in Cincinnati, had ever tasted a ramp (Allium tricoccum). The onion-like plant grows in the wild in at least 54 of Ohio’s 88 counties, according to the U.S. Department of Agriculture. It has a dark red stem, a slender white bulb and such a strong garlicky taste that those who eat the plant’s stalk, leaves or bulbs end up smelling like the pungent perennial.

But ramps are prized for their unique flavor, described by fans of the plant as a buttery garlic-onion combo. Ramps can be substituted for other leeks in cooked dishes and salads or just munched like a licorice stick if one is brave enough.

Once eaten primarily by those living in Appalachia and by wild foragers, ramps have found their way onto urban gourmet plates. Even Martha Stewart created a ramp recipe. Part of the plant’s current mystique is that it belongs to the let’s-get-back-to-nature movement and the trendy popularity of funky forest edibles. It’s also rather nice to eat a native leek instead of an imported French onion once in a while.

But for some longtime ramp lovers, the practice of gathering and eating the plant is almost cultlike. And more than one unsuspecting ramp-eating novice has been encouraged by a veteran to eat “just a few more,” never suspecting the odoriferous consequences.

Sure, the stinky side effects can be unpleasant, but Carroll found a way to work around them. As he puts it, “[You] get someone to eat ramps with you, or stay far away.”

Carroll and his partner, Diane Seskes, hosted a “ramp feed” at their Peninsula home last winter. They invited friends who had some in their freezers and ordered dried ramps from out of state. But that dinner was just the start.

Last spring, during those few weeks when the ramp bulbs are at their most tender and are usually harvested, the Summit County couple organized the first Ramp Up Peninsula festival with the help of friends, neighbors and the local chamber of commerce.

“I had people come up to me and tell me they were glad Ohio had its own ramp festival,” says Seskes. “They were happy they didn’t have to go to an out-of-state festival and wait in a long line to buy a  ramp dinner.”

At that inaugural festival, the 50 pounds of raw ramps that Carroll legally dug from three private properties sold out early.

This year, Ramp Up Peninsula is set for Saturday, April 26. Food vendors are expected to sell soup, pierogi, pesto, tarts, sausage and more featuring the festival’s star ingredient. (The most common way to serve ramps is to saute the entire, cleaned plant in bacon fat until the leaves curl — a dish affectionately referred to as Little Stinkers.) “The festival’s Bloody Stinkin’ Marys are really good,” adds Seskes. “Instead of a celery stalk, they put a ramp in the glass.”

Those who want to forage for their own ramps need to limit their search to private property. Ramp harvesting is prohibited at Ohio state parks and preserves, regional metroparks and the Cuyahoga Valley National Park. Like any plant that has experienced a boom in popularity, sustainable growing and digging practices are always an issue. But botanist Jim Bissell, director of conservation for the Cleveland Museum of Natural History, says he hasn’t seen a significant decline in ramp populations throughout the state.

“Ramps are generally found within high-quality forests,” he says. “Because deer avoid eating ramps, plants that deer eat voraciously, such as trilliums and squirrel corn, often persist in ramp stands long after deer have removed them from other sections of the forest.”

Growing ramps from seed is possible, but it can take five to seven years until harvest time. Most first-time ramp growers prefer bulbs that are dug for transplanting in early spring. Large bulbs should be planted three inches deep, four to six inches apart with just the tip of the bulb showing above the ground. Clumps of four to five smaller bulbs can be planted together. Growers should mulch them generously with leaves and harvest only up to one-fifth of a ramp plot each year to ensure the colony survives.

Bissell says ramps are easy to grow in a rich soil that has lots of humus and pH near 7 or above, although he cautions that it takes a long time for them to spread naturally. Forty years ago, he planted a patch in a rich creek bottom, but the plants have yet to cover the area.

Many people who bought Carroll’s raw ramps last year did so to plant them on their own property. Some told him they hadn’t eaten ramps in a long time and hoped to change that. Carroll was more than happy to oblige.

“I just really like the taste of ramps, and I’m glad we got the chance to share them with a lot of people,” he says. “You may think you wouldn’t like them, but a lot of people change their minds.”