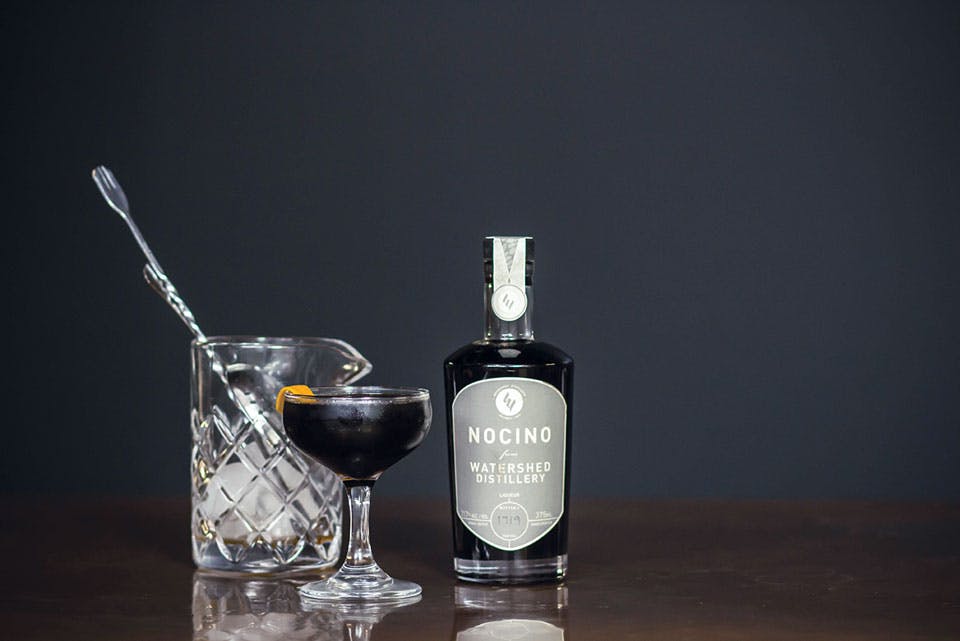 Open a bottle of Watershed Distillery’s black walnut liqueur this winter, and you’ll taste a little bit of summer. Nocino, a rare digestif with roots in Northern Italy, starts with under-ripe walnuts harvested during late June and early July. It’s then steeped in vodka for four months.

“We were driven by all these local breweries doing really cool things,” says Greg Lehman, co-owner and distiller at the Columbus distillery. He got the idea for Nocino after a neighbor invited him over to try a homemade version of the drink. “It was just one of those moments, [I thought], We’ve got to make this stuff.”

Timing is paramount when it comes to crafting the walnut liqueur. “You pick the green nut before it fully matures,” Lehman explains, adding that once fall arrives, the rock-solid shell is difficult to crack.

“What we’re trying to balance is having the nut be big enough where we’re not cutting up thousands, but have it still be immature enough that we can chop it up by hand,” he adds.

Lehman and his team spend days quartering young walnuts to bathe in spirits, adding vanilla and orange peel accents. “You have those citrus elements coming through — that black walnut smell,” says Lehman. “You almost get that bitter coming in, but we have sugar in there to balance that out.”

Released for the first time in 2014, Nocino quickly found a place at bars and in cocktails such as the Boulevardier, a sweet-but-rustic concoction made with rye, Nocino and an herbal Cocchi Americano or Cappelletti.

Watershed Distillery will release this year’s batch of Nocino in mid-November. For more information, visit watersheddistillery.com.

DIRECTIONS
Combine ingredients over ice, stir, and serve in glass with an orange peel.