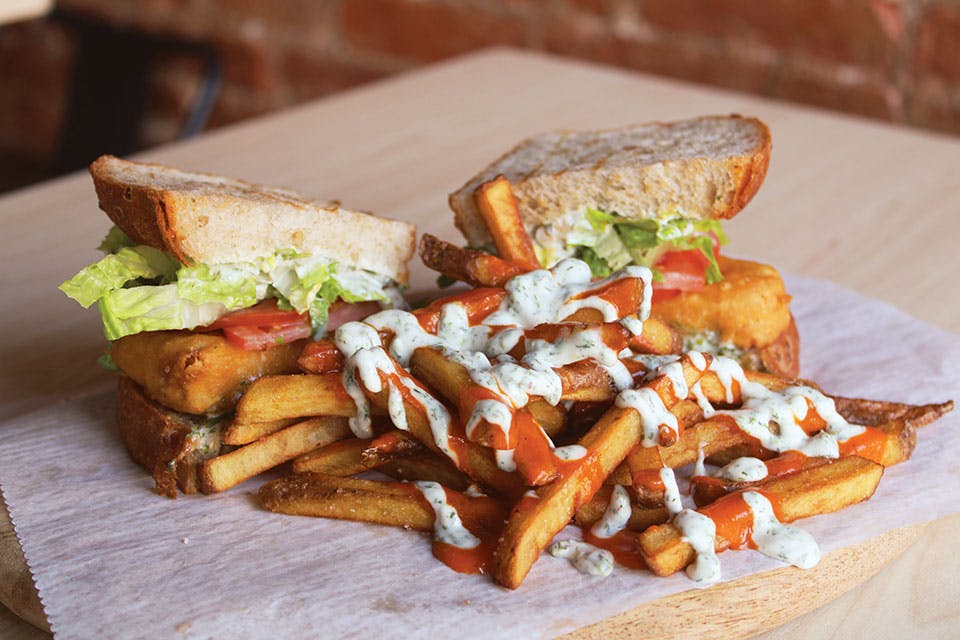 Lifestyle Cafe’s quaint corner restaurant in Columbus’ historic Olde Town East is dominated by an open kitchen with two counters and a collection of four tables that fill the brick-walled space. It’s the creation of Shanna “Chef Bae” Dean, who serves a 100-percent-vegan menu of classics like chicken and waffles, fish sandwiches, BLTs, grilled cheese and avocado toast — all skillfully adapted to plant-based versions.

Dean worked as a personal chef and caterer before opening her cafe in January 2020, and she was initially hesitant to get back into the restaurant business.

“I was catering to specific needs like vegan or organic,” she says. “A friend of mine was doing a detox, and I made some things for her. She had traveled a lot, and I’ve traveled a lot and loved trying out vegan and vegetarian options. She said, ‘You make some of the best vegan food. If you do a restaurant, I’m in.’ ”

“It was a long journey for me when I started cleaning up my diet,” she says. “I had so many unsavory experiences with vegan food. I went to culinary school to learn what I could do to take cleaner, better ingredients and make the food delicious.”

She opened Lifestyle Cafe just in time for the pandemic to set in, but because her restaurant is small, Dean was able to adjust and survive, emerging as a solid operation in a growing neighborhood.

Dean says her chicken and waffles is Lifestyle Cafe’s signature dish. She combines gluten-free flour with spelt flour, cinnamon and coconut sugar brulee to create a wonderfully crispy base. Diners have the option of topping Dean’s waffles with mushroom chicken or a soy-based chicken substitute that successfully replicates the flavor and texture of dark-meat and white-meat chicken.

“A lot of people like our taco toast,” Dean adds. “It’s like an open-faced taco. It features our house-made taco meat — we call it sloppy mix — plus pico de gallo, avocado cream. That’s one of our bestsellers.”