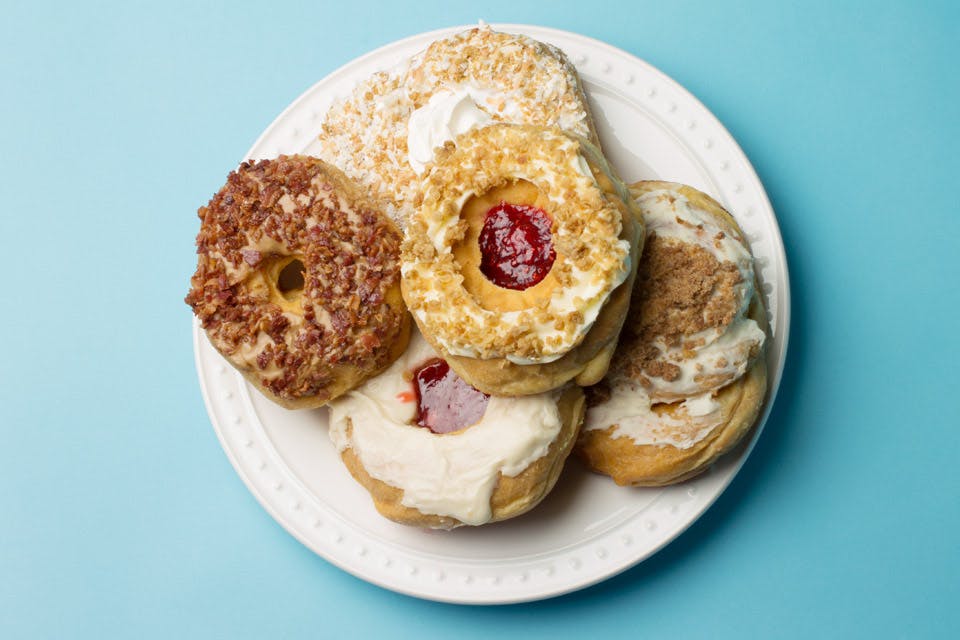 Graham cracker-crusted coconut cream pie, peanut butter and strawberry jam, and a spicy-sweet creation reminiscent of a cinnamon roll are just a few of the doughnuts rolling out of Chris Ritter’s kitchen. And with such bold flavors, it only makes sense that the treats are sized to match.

Since 2014, Ritter has been churning out the morning favorites under the name Holey Toledough. His weekly rotation features primarily sweet options, such as his Nutella-frosted Long John, which oozes banana cream and is sprinkled with crushed Nilla Wafers. Others push the boundaries of what it means to be a doughnut by delving into savory territory.

“I did a sweet corn doughnut — it was essentially a sweet cornbread — and I took corn kernels and folded those in the batter, with a honey butter glaze,” says Ritter, who also makes a cheese fritter using his plain doughnut base. “I threw in fresh roasted garlic cloves, bacon bits, chopped up some sharp cheddar cheese, a handful of chives … and I just finished them with a dust of Parmesan cheese.”

Although he doesn’t yet have a storefront, Ritter sells his doughnuts at coffee shops in the Toledo area, including Black Kite Coffee and Flying Joe. A mainstay at the Toledo Farmers’ Market, he has access to all the fresh ingredients he needs.