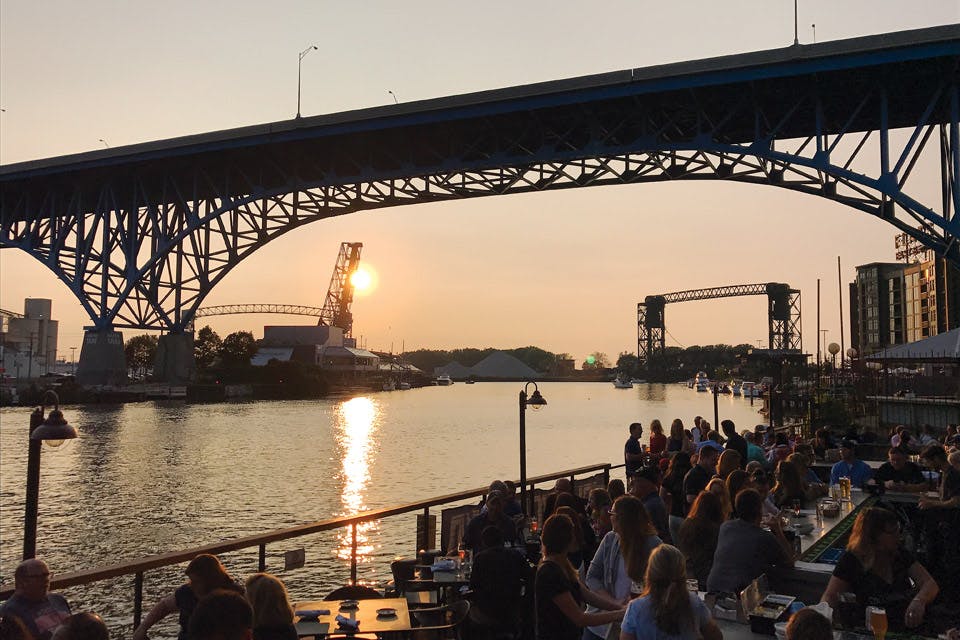 Collision Bend lives up to its name. The sharp turn in the Cuyahoga River as it weaves through Cleveland’s industrial Flats has tested commercial vessels for more than 100 years. Today, the danger of a collision has been largely eliminated, but it’s still fun to watch large ships navigate the tight turn.

In April 2017, Collision Bend Brewing Co. opened near the famous spot in an 1836 building that serves as an inviting and beautiful backdrop for the brewpub’s selection of delicious craft beers made by Luke Purcell (formerly of Great Lakes Brewing Co.) and an inventive menu inspired by Southern California street food.

“We wanted to do food that was sharable,” says Julian Bruell, the brewpub’s director of service. “Most of the menu is small plates. It was designed so people could have that communal experience.”

The menu's more than 20 small plates range from tasty open-face street tacos to the excellent Collision Bend Popcorn. There are also eight wood-fired pizzas, as well as larger dishes such as ale-brined chicken breast, pulled pork and the Collision Burger.

But one can’t overlook the power of the patio, which packs them in as temperatures rise.

“Being on the water is a huge draw, especially in the summer,” Bruell says. “There are a lot of things about the location that are unbeatable.”

Drink This
Collision Bend brewer Luke Purcell gives us the rundown on two beers to try this summer.

Lake Erie Sunset
Pale Wheat Ale
“We wanted to do something light — a nice summertime beer,” says Purcell. This 5.2 percent ABV American wheat is infused with blood orange and “has a nice, crisp, tart finish,” Purcell says. “It eded up being our best-selling beer.”

Old River Kolsch
Kolsch
Named for the road where Collision Bend is located, this crisp and bright beer also has a 5.2 percent ABV and, much like Lake Erie Sunset, goes well with a hot summer day on the riverfront. “It’s a nice German ale,” Purcell says. “It’s light and approachable.”

Note: Visit the brewery's website for an up-to-date list of beers, including seasonal options and new varieties.