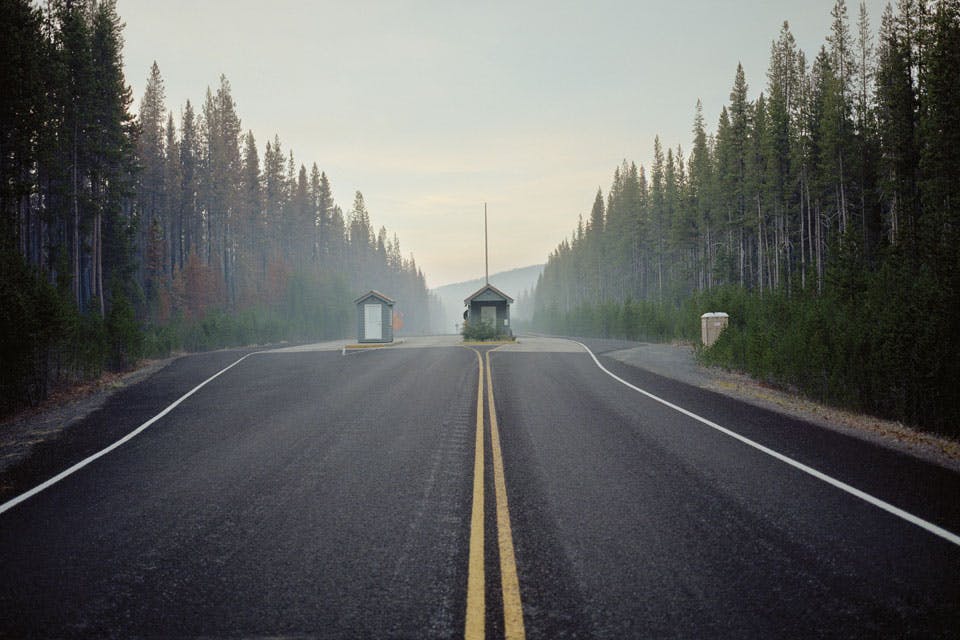 The Akron Art Museum marks the National Park Service centennial with photographs of our public lands and historic places.

Lakewood resident Ricky Rhodes and his wife, Kaitlin, had just spent an exhilarating afternoon hiking along the shoreline of Crater Lake National Park in southern Oregon.

Home to the deepest lake in the nation, the site was a must-see for the couple during their vacation last fall. Rhodes, a professional photographer, was pleased with the images he’d captured on his camera. But it was while traveling to their next stop that he happened upon the scene that would prove to be the most memorable.

“I’ve always been interested in photographing mundane things that might be overlooked,” Rhodes says. “There wasn’t much activity that day, and the road was so empty it made you feel as though you were the only person in the universe. The smoke from nearby forest fires had made this surreal haze, and the trees flanking the guardhouse created perfect symmetry. And the Porta-John added a touch of whimsy to the whole picture.”

Akron Art Museum associate curator Theresa Bembnister thinks so, too. Rhodes’ “Crater Lake Exit” was one of the 21 images she chose to showcase in “Our Land,” a photographic exhibition on display through Feb. 12 to honor the centennial of the National Park Service.

“We all have these notions in our heads about what national park landscapes look like,” Bembnister says. “But there’s a paradox: These lands have been set aside to preserve their natural beauty, but they’ve also been set aside so we can enjoy them. Ricky’s work captures the tourist side of the infrastructure that’s been put in place to make that possible.”

Although the exhibit includes works by celebrated nature photographers Ansel Adams and Robert Glenn Ketchum, Bembnister made a point to incorporate images that beg for additional reflection, including the Manzanar War Relocation Center in California, where Japanese-American citizens were interned during World War II, and the Vietnam Veterans Memorial in Washington, D.C.

“The National Park Service makes sure our country remembers not only the positive side of history but also the somber side,” Bembnister says. “I am happy to be able to include these powerful images.”

For more information about this exhibition, visit akronartmuseum.org.