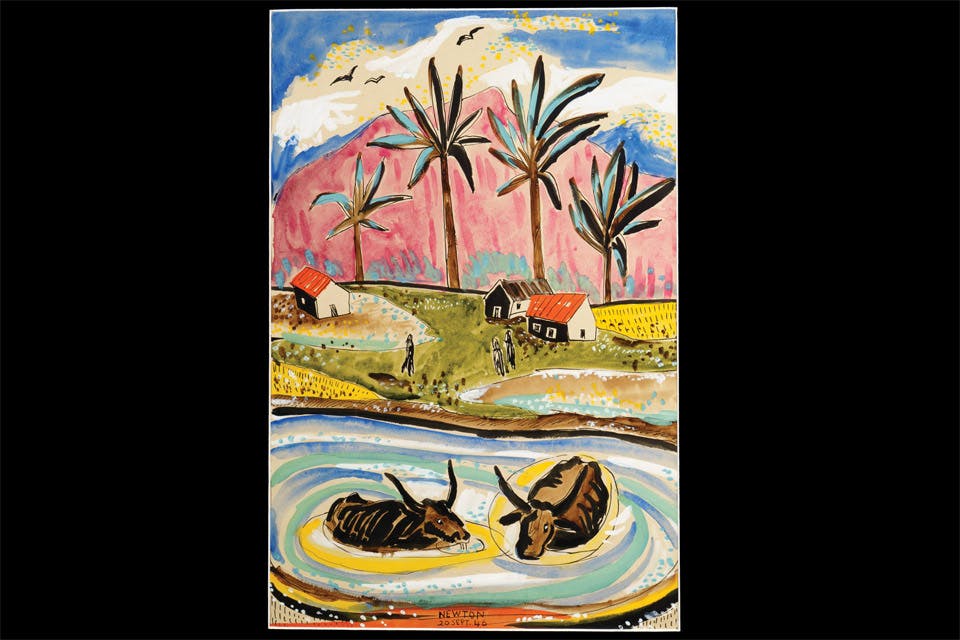 Columbus’ Pizzuti Collection features works by Francis Newton Souza and 25 of the most prominent artists working today who have a connection to India.

Two water buffalo wade in a swirl of soft colors as towering palm trees reach toward the sky in the distance, framing a scene of villagers, houses and farm fields. The cheery painting is “Village Scene from Goa, India,” a 1946 work by Francis Newton Souza and one of 30 of the Indian artist’s works on display as part of the Pizzuti Collection exhibition “Visions from India.”

“They are depictions of places he knew as a child growing up,” says Greer Pagano, interim curator at the Columbus gallery. “It’s almost like a love story between Souza and his connection to this place.”

“Visions from India,” which runs March 10 through Oct. 28, is presented in two segments displayed across the gallery’s three floors. “The Progressive Master: Francis Newton Souza from the Rajadhyaksha Collection” features original paintings and drawings on loan from Columbus collector Vikram Rajadhyaksha.

The other segment of the exhibition, “Transforming Vision: 21st Century Art from the Pizzuti Collection,” includes 40 modern and contemporary pieces from 25 of the most prominent artists working today who have a connection to India. Featured works include Sudarshan Shetty’s 13-foot hand-carved wooden archway titled “For All That We Lose,” as well as Sheila Makhijani’s intricate line paintings on paper that reveal themselves the more a viewer inspects each work.

“We are excited to celebrate India, which has thousands of years of history,” says Pagano. “This group of artists and their work are just as eclectic as the Pizzuti Collection in general.”