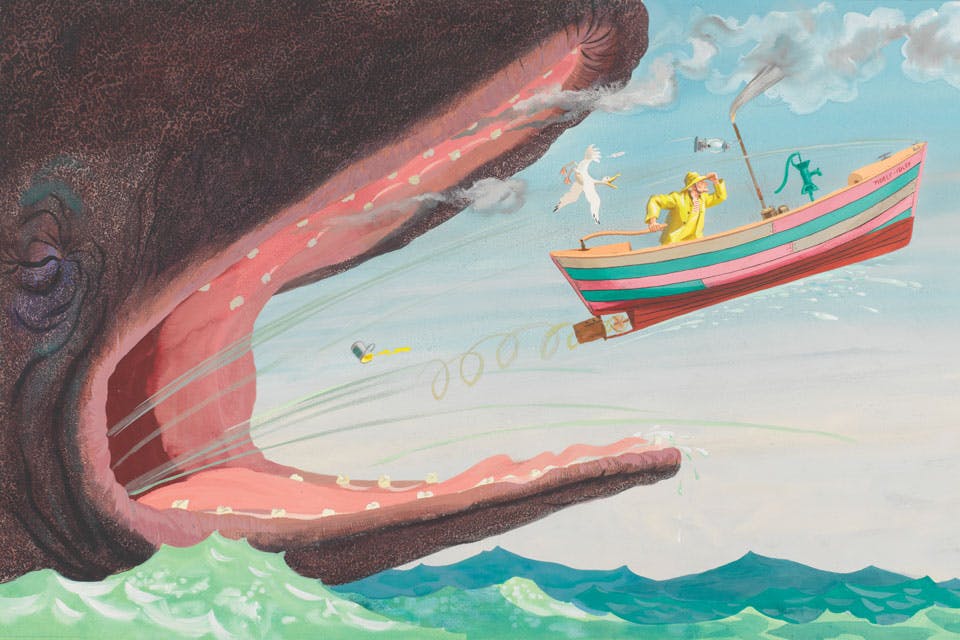 The Art of Robert McCloskey

It’s been eons since Emily Holtrop read Blueberries for Sal, but the years fall away as she describes the picture book that was a childhood favorite.

“The reason I love it so much is that blueberries are absolutely my favorite fruit,” says Holtrop, director of learning and interpretation for the Cincinnati Art Museum. “I’m from Grand Rapids, Michigan, so I grew up picking Michigan blueberries with my mom and, just like Sal, eating more out of my pail than what actually made it home for pies and muffins.”

But it wasn’t until Holtrop began compiling research materials for the museum’s upcoming exhibition that she learned about the author and illustrator of the beloved story, published in 1948.

From July 20 through Sept. 9, the museum will present “Make Way for Ducklings: The Art of Robert McCloskey,” a showcase of more than 100 original artworks, as well as rare preliminary sketches the author created for his books.

McCloskey, who was born in the southwest Ohio city of Hamilton, wrote and illustrated eight books throughout his career that have been favorites for generations. He received the Caldecott Medal — The American Library Association’s annual award of distinction for children’s book illustration — for two of them: 1941’s Make Way for Ducklings, in which a flock of baby ducks waddle behind their mother to take up residence in Boston’s Public Garden; and Time of Wonder, a poetic ode to nature he penned in 1957 that is filled with images of watercolor paintings about Maine. He also illustrated 11 books by other children’s authors, including Ruth Sawyer and Keith Robertson, and was named a Living Legend in 2000 by the Library of Congress. 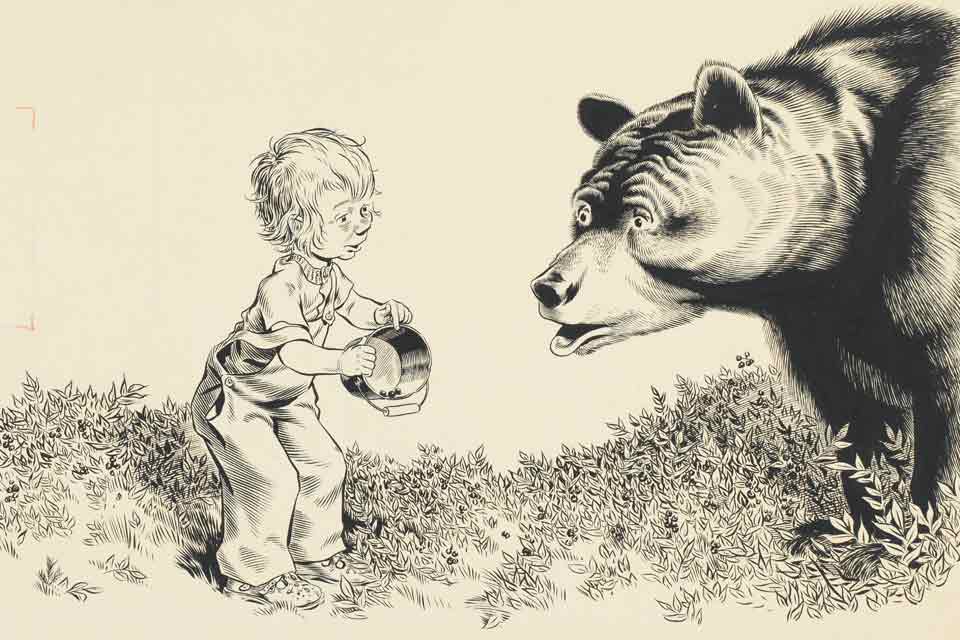 “McCloskey rose to prominence in the 1940s, ’50s and ’60s, which was a little bit before my time,” Holtrop says. “So whenever I thought about Blueberries for Sal, I only remembered the story and the pictures about a child wandering off and getting into all kinds of shenanigans with a mama bear — not the name of the person who created them.

“But, as this exhibit attests, it’s important to let people know children’s book illustrators are really fine artists. McCloskey was illustrating his books at the same time American Regionalist painters were depicting scenes of American life and landscape. If you look at some of his original paintings, they are [reminiscent] of Grant Wood and just as good.”

Born in 1914, McCloskey took an early interest in the arts. He studied piano and taught classes in soap carving at the local YMCA. In 1932, he won a scholarship to the Vesper George School of Art in Boston. Two years later, he was commissioned to design the bas-reliefs and cast aluminum pieces for the city of Hamilton’s municipal building.

McCloskey then moved to New York to study at the National Academy of Design and, at the urging of a classmate, arranged a meeting with May Massee, an editor at Viking Press. In the obituary The New York Times published about McCloskey in 2003, the newspaper included his description of that encounter: “[Massee] looked at the examples of ‘great art’ that I had brought along (there were woodcuts, fraught with black drama). … I don’t remember just the words she used to tell me to get wise to myself and shelve the dragons, Pegasus and limpid pool business. I think we talked mostly of Ohio.”

Leonard S. Marcus, author of Show Me a Story! Why Picture Books Matter: Conversations with 21 of the World’s Most Celebrated Illustrators, says McCloskey was a powerful artist.

“He drew strong images that clearly delineate the characters and settings of his stories and draw you into that world as you look at them,” Marcus says.

McCloskey’s idyllic boyhood in Hamilton served as the basis for several of his books, including Lentil, the tale of a youth who learns to play the harmonica and practices in the bathtub; as well as Homer Price and Centerburg Tales, two stories built around the life of a youngster who tinkers with old radios, has a pet skunk named Aroma and finds himself in outrageous adventures guaranteed to elicit giggles from elementary-school readers.

“Robert McCloskey came along at a time when American picture books were just coming into their own,” says Marcus, who also reviews children’s books for The New York Times. “In previous decades, Americans relied to a large extent on books from England for their children, and there was a great desire here for America to have its own culture, which included its own children’s books.” 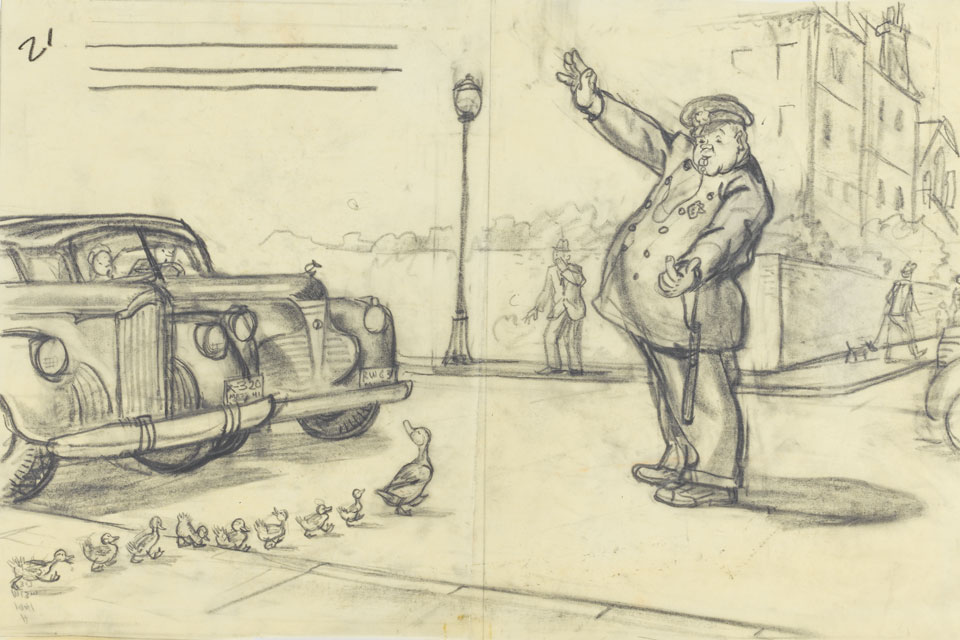 As public libraries began initiating story hours, staff members in charge of them embraced the appeal of McCloskey’s books.

“Librarians were always looking for picture books containing stories that had a beginning, middle and end, and featured a character children could identify with on an emotional level who would give them a sense of both the bigness of the world and their own place in it,” Marcus says. “And, since he’d imagined a career for himself as a muralist, McCloskey liked to work large. Of course, that suited story hour because the pictures had to be seen by children in the last row.”

The final two books McCloskey wrote and illustrated — the only two published in color — are love letters to Maine, where he, his wife and their two daughters moved following World War II. The volumes also serve as testament to his prowess as a painter.

The award-winning Time of Wonder offers glimpses of the beauty that prevails along the Maine coast, including the changing hues created by light. Burt Dow, Deep-Water Man is a tall tale McCloskey concocted in which a fisherman and his pet gull set out to sea and, after being swallowed by a whale, rely on humorous ingenuity to return them to dry land.

“McCloskey created loving, insular places that are safe, where families and neighbors look out for each other,” Holtrop says. “It’s the kind of world we still want today.”