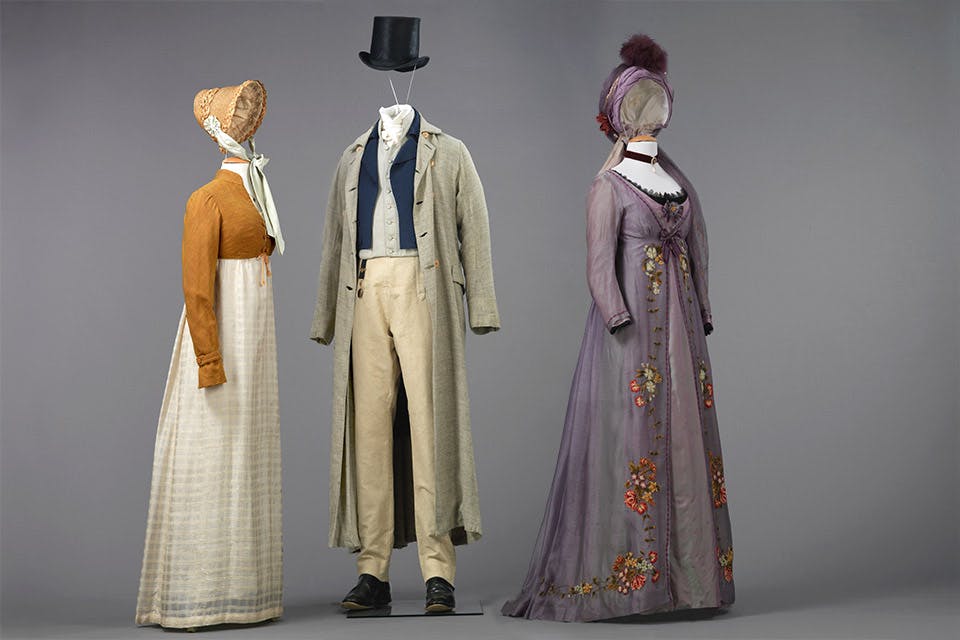 The Taft Museum of Art in Cincinnati hosts an exhibition of wardrobe worn in six screen adaptations of Jane Austen’s classic novels.

The opulent costumes in “Jane Austen: Fashion & Sensibility” are more than just clothes. The wedding dresses, riding habits and ball gowns are works of art that bring the themes of the celebrated author’s novels to life. The exhibition, on display at the Taft Museum of Art in Cincinnati through Sept. 4, features 40 costumes worn by stars like Kate Winslet and Hugh Grant from six screen adaptations of Austen’s novels.

The garments are on loan from Cosprop Ltd., a British costume house known for creating award-winning period wardrobe pieces for film, television and theater, thanks to an extensive archive of real historical clothes and antique fabrics and patterns.

“The costume designers work really hard to make things that are historically accurate, but at times take license with that to help tell the stories,” says Tamera Muente, curator at the Taft Museum of Art. “For instance, they use things like color and fabrics that might slightly diverge from historical accuracy in order to visually make a point about class division or economic status.”

For example, a pair of cotton dresses, designed by Dinah Collin and worn by the Bennet sisters in the 1995 BBC series “Pride and Prejudice” are adorned with dainty floral prints. The prints immediately mark them as being from the country to a modern viewer. Meanwhile, costumes worn by the wealthier Bingley sisters are crafted in fine silks and bright colors.

Costumes are placed throughout the historic Taft Museum of Art in locations that put them in context with their surroundings. For example, three pairs of wedding outfits from the BBC’s “Pride and Prejudice” and the 1995 film “Sense and Sensibility” are displayed in the music room, a nod to its history as the location of Charles and Anna Taft’s 1873 wedding.

The outfits include a lavish, gold-trimmed wedding dress designed by Jenny Beavan and John Bright that Kate Winslet wore in “Sense and Sensibility.” Similarly, a dress worn by Judi Dench while portraying wealthy landowner Lady Catherine de Bourgh in the 2005 film “Pride and Prejudice” is presented in the gallery of British portraits alongside paintings of wealthy landowners.

“I tried to find neat little connections,” says Muente. “If you’re a Jane Austen fan, those will be really cool things to discover, but if you’re not, you can still appreciate them on the level of fashion history and beautiful clothing.”