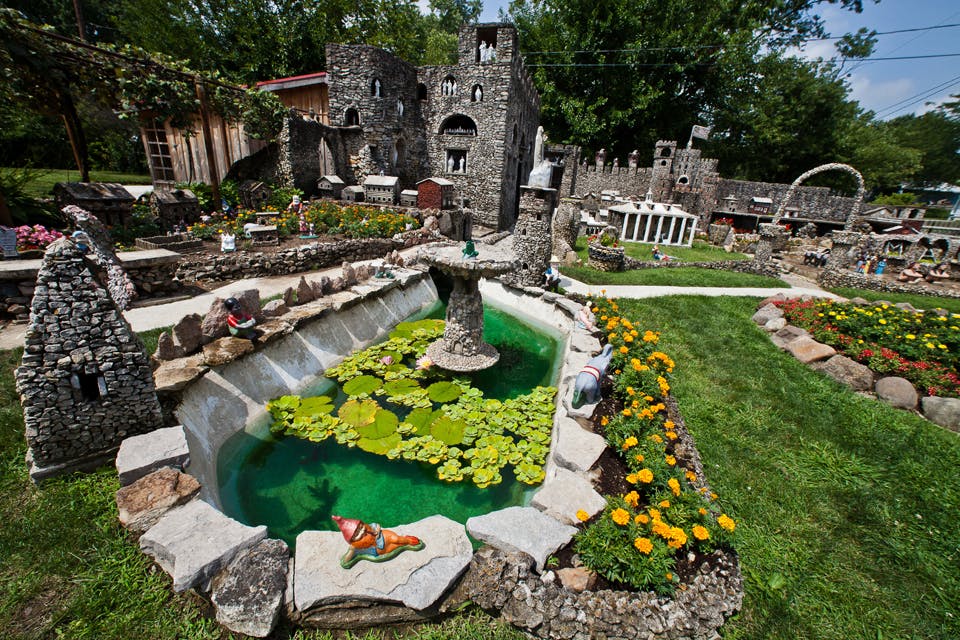 During the Great Depression, Ben Hartman created a collection of interesting and idiosyncratic folk art sculptures at his Springfield home.

A 14-foot stone cathedral towers over the backyard. Ben Hartman’s scaled-down take on medieval Italian architecture includes little arches and alcoves, each adorned with tiny sculptures depicting religious iconography, including a version of Leonardo da Vinci’s “The Last Supper” and statuettes of the Madonna.

Not far away, there’s a 12-foot castle featuring a drawbridge, a moat and more than 107 windows. Painstakingly crafted miniature stone structures decorate the surrounding landscape: Tiny icicles hang from cabin roofs at Valley Forge, 14 small animals march two by two onto Noah’s Ark, and little desks line the inside of a miniature one-room schoolhouse. The more you look, the more you find.

Harry George “Ben” Hartman built all of it, starting in 1932 when he was laid off from his molding job at the Springfield Machine Tool Co. foundry at age 48. He refused to remain idle, and as the Great Depression took hold, something special blossomed in the backyard of Hartman’s 1920s home at 1905 Russell Ave. Between 1932 and 1939, he built more than 50 ornate structures on his home’s 9,720-square-foot-lot — what is today known as the Hartman Rock Garden.

On the north side of the yard, 20 mules pull two wagons past cacti in a sand-filled rendition of Death Valley — a reference to the 20 Mule Team Borax laundry soap commercials that aired during one of Hartman’s favorite radio shows, “Death Valley Days.” Nearby, a replica of Reco Sporting Goods offers a nod to the Springfield business where Hartman bought fishing equipment. Throughout the garden, concrete walkways embedded with tiny stones transmit strange and stirring adages: “Lead, Kindly Light,” “Seek the Good in Life,” “Love Honor and Obey All Laws” and “No Place Like Home and Mother.”

At the heart of the garden, the round edges of stream-worn gravel, red granite and concrete unite to form Tree of Life. Hartman used an estimated 20,000 tiny stones to construct his 7-foot centerpiece, which resembles a two-armed cactus.

One arm holds a schoolhouse, while the other supports a church and two cement doves. At the top, an eagle sits upon a globe emblazoned with “U.S.” It reflects the importance Hartman put on education, religion and patriotism.

“Each piece is remarkable in its own right, but then you pull them all together and you have this amalgamation of patriotic symbols and religious symbols and Depression-era pop art,” says Kevin Rose, a historian at Springfield’s charitable Turner Foundation, the organization that has helped preserve the Hartman property. “Any individual piece is significant, but it’s not nearly as significant as the collective whole.” 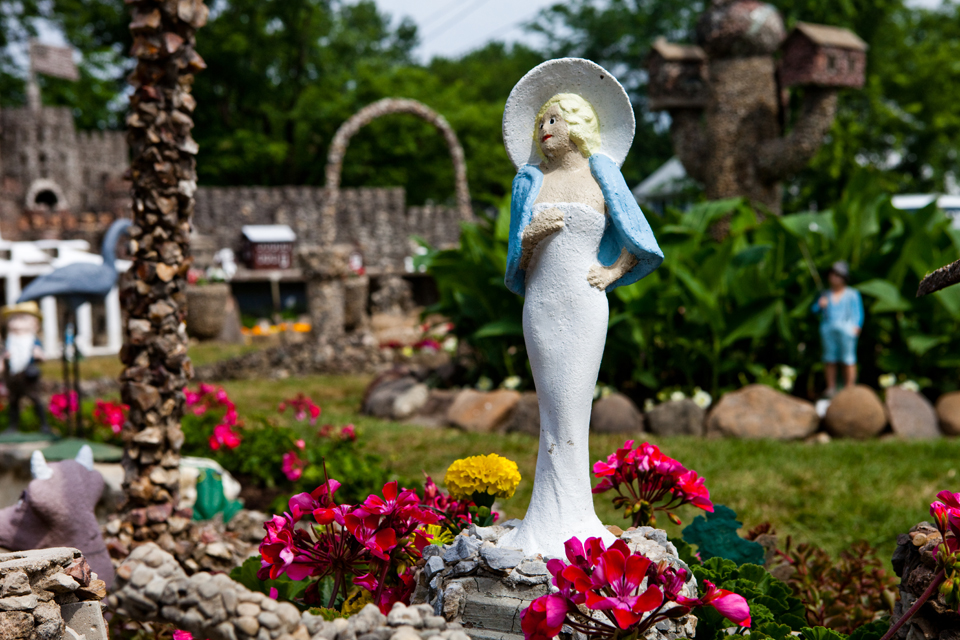 “Each piece is remarkable in its own right, but then you pull them all together and you have this amalgamation of patriotic symbols and religious symbols and Depression-era pop art," says Kevin Rose, a historian at the city of Springfield’s charitable Turner Foundation. (photo by Rod Hatfield)

Born in Edenville, Pennsylvania, in 1883, Ben Hartman left home at age 16 to master mold making, the craft he’d use to both earn a living and create his elaborate sculpture garden. In 1913, he settled in Springfield and, in 1928, after his first wife Maggie died of cancer, Ben married Mary Johns. Together, the couple raised three children: Ruth, Martha and Benjamin, who often went by “young Ben.”

During those days, southwest Springfield was a rustic enclave near the edge of town. The Hartmans kept chickens and rabbits and grew vegetables and flowers in their gardens and greenhouses.

Ben Hartman also frequented a spot known as Sunnyland, an area of Springfield west of Russell Avenue. “He always went fishing down [there],” recalls 80-year-old family member George Henderson, whose mother was Mary Hartman’s aunt.
“Then he decided to build a pond in his own yard.”

Ruth Hoover, now 89 and one of the Hartman’s three children, says goldfish and water lilies were eventually added to the backyard pond. “It was shortly after that when he made that Little Church Around the Corner,” she adds.

Modeled after New York City’s landmark Church of the Transfiguration, the piece was the first miniature building Hartman built in his yard, complete with furniture, stained glass windows and a mini bride and groom.

Hartman continued on with replicas of Independence Hall, the White House and dozens of other creations. “I think my childhood had some bearing on the things he made,” says Ruth. “One time in school we had to do a report ... and mine was on Hoover Dam. And all of a sudden, there’s Hoover Dam in the garden.”

By 1939, Hartman’s work on the garden started to reach its end. The nation was beginning to recover from the Great Depression, and he was called back to work at the Springfield Machine Tool Co. But while work on his garden had kept him going, his work as a molder at the foundry took its toll on his health.

“I saw him stand and cough like you couldn’t believe it,” recalls Ruth. “I can remember how he had to carry those ladles of hot iron and pour into those molds. He breathed in that sand and all those awful fumes. It just ruined his lungs.”

In 1944, Ben died of silicosis — a disease caused by inhaling silica dust — leaving behind Mary, his three children and one of the nation’s most idiosyncratic collections of folk art remaining in its original place.

“It’s amazing when you can see art where it was intended to be, and where it was created,” says Rose of the Turner Foundation. “It’s not removed from its context. It’s sitting right where he built it, right where he intended it to be. There’s something magical about that.”

Mary kept the garden going throughout the decades. She added flowers and largely preserved the grounds in Ben’s honor. In 1997, Mary died and, soon after, young Ben moved into the home at 1905 Russell Ave. But with Mary gone, the garden began to wilt.

“My dad had failing health, so he couldn’t do a lot of the yard work,” says young Ben’s daughter Denise Canady. “I was worried … and so was my dad.” 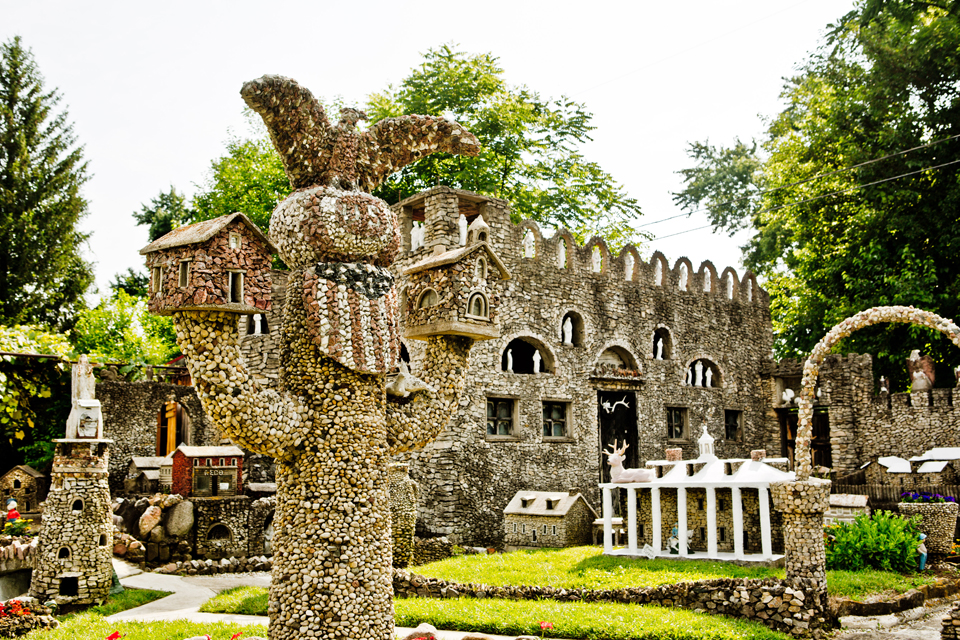 Visitors are welcome year-round to view works such as Oregon Trail and Cactus Garden, The White House and the Tree of Life (above). (photo by Rod Hatfield)

“I wanted to save it, but it was crumbling. It wasn’t a very happy place, honestly, as it had been over the years,” recalls Canady. “I kept grasping. Maybe there was somebody to help me?”

Canady contacted Bowling Green State University art professor and Hartman advocate Karen Kakas, who encouraged her to call the Wisconsin-based Kohler Foundation. Founded in 1873, the Kohler Co., best known for its plumbing products, also has an arts and education foundation dating back to 1940. Starting in 1970, the Kohler Foundation began preserving folk art, or what they refer to as “art environments” or “vernacular art.”

“We were aware of the site. They were in a panic. I think it was going up for auction,” says Kohler Foundation executive director Terri Yoho. “This is not unfamiliar territory to us. We often come in right ahead of the bulldozer.”

The property needed to be overhauled. Time and neglect had turned the inspiring sculptures into symbols of despondency. The Kohler Foundation made a quick decision to save Hartman’s work. Not only did the organization underwrite the restoration, it provided landscapers and professionals to help.

“[They] carried concrete sculptures, helped conservators clean and pulled weeds,” says Yoho. “There are unique applications and installations with really unusual rocks. We had to bring rock specialists in to try to replace things.”

After the garden’s restoration, the foundation gifted the property back to Friends of the Hartman Rock Garden, a Springfield-based organization tasked to maintain the art attraction.

“It has something for everybody,” says Yoho. “It’s this amazing little island in this residential neighborhood.”

Walking through Ben Hartman’s former backyard, passing by his replicas of the Liberty Bell or the Betsy Ross House or the Springfield Central Fire Station, the time and care he invested is palpable. Stone by stone, day by day, year by year, Hartman built what his late wife Mary referred to as a “garden of love.” Ruth Hoover says her father would be honored that his creation has lived on.

“He couldn’t express the delight he would have,” she says. “He would be so thrilled. I know that.”