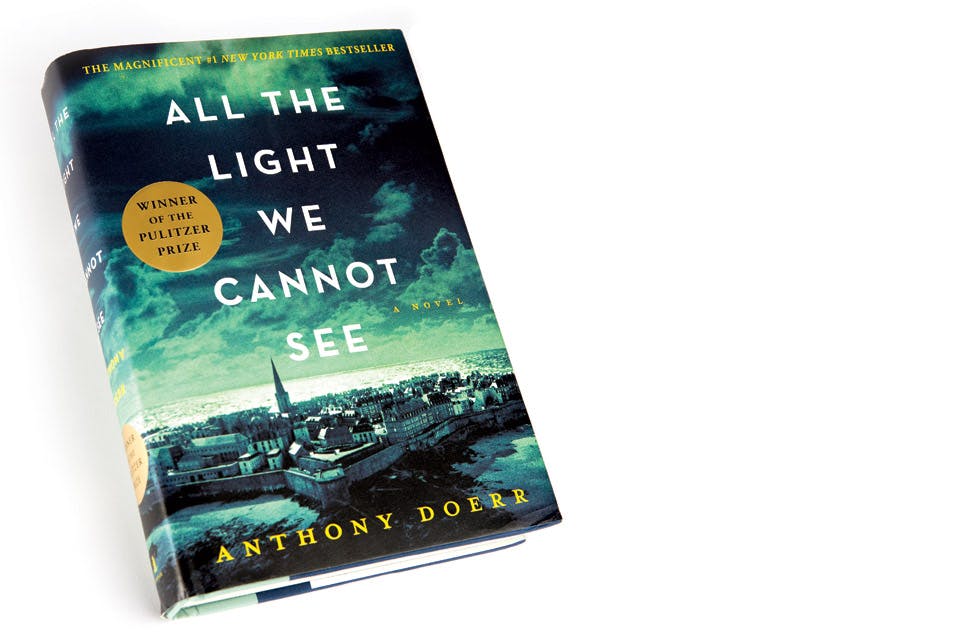 We talk with the Ohio native about “All the Light We Cannot See.”

Marie-Laure LeBlanc is a blind girl living in Paris with her father, a locksmith at the National Museum of Natural History. Werner Pfennig resides in an orphanage in the coal-mining town of Zollverein, Germany. Their lives — which intertwine with the waning days of World War II — serve as the basis for All the Light We Cannot See by Ohio native Anthony Doerr.

The author, who grew up in Novelty and earned a Master of Fine Arts degree at Bowling Green State University, was awarded the 2015 Pulitzer Prize for fiction for his haunting epic, which took 10 years to write. This month, he’ll also receive an Ohioana Book Award from the Ohioana Library Association. His previous works, About Grace, a novel centering on a father’s premonition surrounding the death of his daughter, and Memory Wall, a collection of short stories exploring the power of recollection, also received Ohioana Book Awards in 2005 and 2011, respectively.

Doerr talked with us about how a train ride from New Jersey to New York sparked the idea for the novel, his fascination with the walled port city of Saint-Malo, France, and why the lessons of World War II should never be forgotten.

Why did you decide to enter the realm of historical fiction with All the Light We Cannot See and have most of the action take place during World War II?
The idea for the book was sparked on a train in 2004. I was doing postgraduate fellowship work at Princeton and was headed to New York City to see my publisher. I had finished About Grace and was searching around for a new idea. When we approached Manhattan, the train passed through a tunnel. The man in the seat in front of me was talking on his cellphone and, as we went underground, his call dropped. He got so unreasonably angry that it became ridiculous. I began asking myself, “How did we all get to the point where we take for granted that this technology will work? That you in Ohio, and me at home in Idaho, can speak to each other just using radio frequencies?” I decided I wanted to tell a story set in a time when the magic of this kind of long-distance communication was not taken for granted — when hearing the voice of a stranger or loved one in your ear was magical. I began thinking about radio waves and read all I could about [the birth of] radio. When I learned how Hitler and the entire Nazi party used it as a tool for propaganda, I knew I would set the novel in World War II.

Did you infuse any of the characters in the book with interests from your own life?
Actually, I can tie several [aspects] of the story to my childhood in Ohio. I was — and still am — a big Cleveland Indians fan, and the games in the summer lasted past my bedtime. So, after my parents thought I was in bed, I would drag my little crystal radio from under my pillow and listen to the end of the games. Even back then — although maybe not consciously — I was in touch with the magic associated with the fact that the Indians could be in Kansas City or New York City and you could hear this game in real time in your bed in the dark. When I began to invent Werner and think about his character, I decided to include a fascination with radio that was really coming from my own life. And, since reading was a big part of my childhood, I made books important to Marie-Laure, too.

Why did you decide to set much of the novel in the walled port city of Saint-Malo, France?
I visited France for the first time in 2005 when I was on a book tour to promote About Grace. We arrived at Saint-Malo after dark, and I decided to take a walk. I found the city to be a magical place — especially if the tide is low — because it’s surrounded by beaches, and they appear to glow in the moonlight as though the city has its own breathing soul. The next morning, I learned that Saint-Malo was 86 percent destroyed by American bombs during World War II and took 10 years to rebuild. We think of D-Day as [marking the beginning of the end of the war]. But the sad story is that Allied intelligence was not able to figure out how many Germans remained holed up in the city after June 6, 1944. So in August and September of that year, American forces erred on the side of, “Let’s bomb everything, rather than risk any more [Allied] lives.” But ultimately, there were fewer Germans in the city than they realized, which meant Saint-Malo might not have had to be pulverized the way it was. I thought, Wow, there’s a story here.

The plot for All the Light We Cannot See is an intricate maze filled with rich detail that ranges from information about German radio frequencies to the number of storm drains in Saint-Malo to Braille passages from Jules Verne’s Twenty Thousand Leagues Under the Sea. How did you research the period?
After visiting Saint-Malo in 2005, I traveled to Europe three more times, but mostly [my research] took me into books. A lot of All the Light We Cannot See was written in my basement office at home in Boise. The challenge with writing historical fiction is that any time you have a character in 1938 — say, going into a drugstore or the museum — I had to look at photographs to try to imagine what that world was like. And before writing almost every sentence, I found myself diving into research in some way: How did German orphanages work? Was there state-provided schooling for blind children in Paris? The problem with World War II is that there is so much out there to read that’s very interesting. So sometimes my research would become procrastination. I would just read all day instead of working on this book.

The Sea of Flames — a diamond thought to be cursed — features prominently in the story. What led you to add this jewel to the plot and how did you craft the mythological story surrounding it?
When I visited the National Museum of Natural History in Paris, I fell in love with the Gallery of Mineralogy and Geology. There have been some wonderful stories like The Monuments Men told about the fate of cultural and artistic treasures during the war. But I kept wondering about the natural treasures at the museum, including the gemstones that rival the collection here in America at the Smithsonian: What kind of risks did brave people take to try and protect them from the Germans who came in 1940? My mythological Sea of Flames story is kind of a mash-up of lots of gemstones that have accumulated legends about them the longer they are around, including the Delhi Sapphire, a purple sapphire at London’s Natural History Museum, which supposedly brought misfortune to all who owned it. I created the Sea of Flames because to do so gave me many narrative gifts, including the opportunity to ask questions about belief, certainty and faith in life. In the novel, I never really resolve whether or not this curse was real, but I want the possibility to be available to readers to believe in it if they want to.

In an interview with The Guardian, you mention that you grew up outside Cleveland, a place “where to call yourself a writer would be precocious. Or pretentious.” How did growing up in Novelty shape your talent as a writer?
What I was saying to the newspaper, which I think they misquoted, was, “Growing up, I didn’t know any professional writers.” My mom was a teacher and my dad runs a little printing company. They were very supportive, and our house was full of books, but a novelist just seemed like someone who lived in Paris or New York or was dead. That said, I was always writing stories, even in high school. [My teachers at] University School introduced me to Shakespeare and Joseph Conrad and Jack Kerouac. In the spring of my junior year, [one of my teachers] got us started on keeping journals. A lot of my friends rebelled, but I fell in love with that process of transforming the world into language. My teachers were always very encouraging. When a teacher says you’re good at something, it feels good and you want to keep doing more of it.

In an interview with NPR, you expressed concern that World War II and what it means will eventually be forgotten. Why do you believe the war is as important today as it was when it was fought?
We should never forget it because it was the most violent conflict in human memory. It’s easy to think that this was an aberration — that Hitler was a demon who will never come to earth again and that cult of personality can never arise again. But it’s important to pay attention to how he came to power and how technology was used to foment nationalism in a very dangerous way in Germany. It’s obviously a very different kind of conflict, but the way ISIL is using today’s new media to incite violence in frustrated young men is not that different than the way Nazi Germany was using media 70 years ago. YouTube and Twitter by themselves can be amazing instruments of democracy. Someone in rural Ohio can learn French on YouTube and it’s nothing short of a miracle, but at the same time, using those same technologies, some isolated young person in rural Ohio can be recruited by a radical organization.

What does the title All the Light We Cannot See mean to you?
To me, it’s a metaphor for [the fact] that the slice of possibility we see is so small, and there is so much culturally, scientifically and politically out there that we cannot see. The title also allowed me to explore blindness, allowed me to [develop] the character of Werner, who in many ways is more blind than Marie-Laure because he can’t or chooses not to see [what is happening in his world]. And it helped me play with a lot of different ideas about the things we should see but do not.