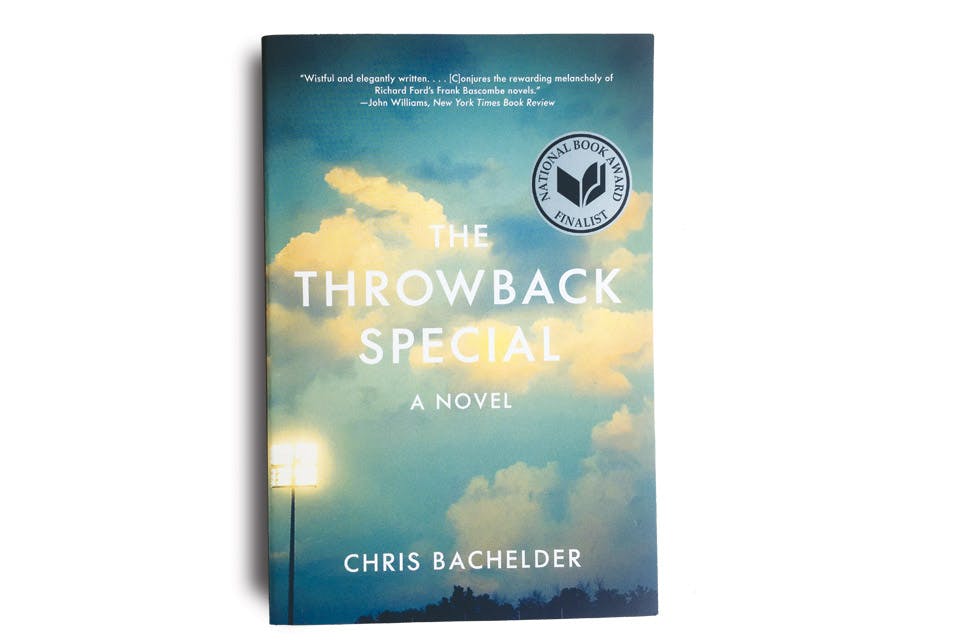 The Cincinnati native discusses ‘The Throwback Special,’ a novel about 22 men who meet annually to re-enact one of professional football’s most gruesome plays.

As a child growing up in Christiansburg, Virginia, Cincinnati author Chris Bachelder always made sure his homework was finished before “Monday Night Football” began. Parked in front of the family’s RCA console TV, he’d follow his favorite teams on the ABC telecast that had become a weekly institution with legions of fans around the world.

But excitement turned to horror on Nov. 18, 1985, as Bachelder — who was 14 at the time — watched Washington Redskins quarterback Joe Theismann suffer a compound fracture of his right leg on a sack by New York Giants linebacker Lawrence Taylor. Theismann, a 12-year NFL veteran who participated in 163 consecutive games, would never take the field again.

“Initially, it didn’t seem to be too bad,” Bachelder recalls. “But when ABC showed the reverse-angle replays, you could see how horrible it really was. What I remember most was how distraught Lawrence Taylor was as he frantically signaled to the sidelines to get medical help on the field. Theismann later said the sound of his leg breaking sounded like gunshots.

Now a professor of English at the University of Cincinnati, Bachelder made the gruesome injury the subject of his latest novel. The Throwback Special centers on 22 men who meet annually at a hotel, form two teams and go through the motions of re-enacting the famous play. As the weekend progresses, key participants wistfully muse about their marriages, their kids and what it means to be middle-aged.

Released in paperback last month, the novel was cited as a 2016 National Book Award finalist. Bachelder will be one of the authors participating in the 2017 Ohioana Book Festival in Columbus.

We talked with Bachelder about how the incident led to a book, the nuances of the male bonding experience and why historic re-enactments are entrenched in our culture. 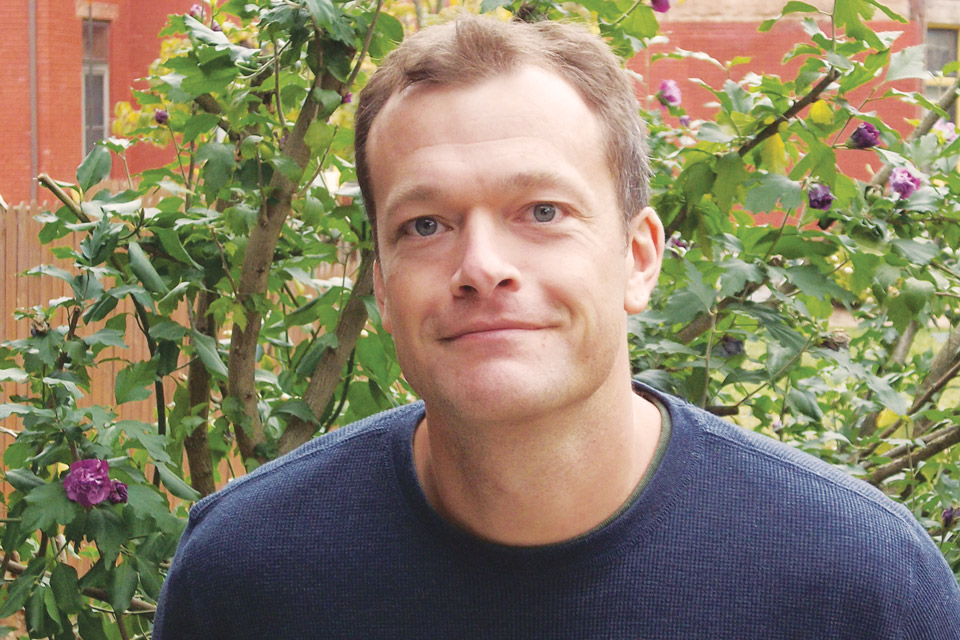 “I realized it wasn’t the play itself that was important to me,” author Chris Bachelder says of the gruesome NFL moment that inspired his novel. “It was the play plus the time that had passed. They play plus the memory, the play plus nostalgia.” (photo by Jennifer Habel)

Why did you decide to make this famous football play the focus of your latest novel?
I wasn’t obsessed with the play, but when you see something this bad, it sticks in your head. It remained just a memory until six or seven years ago when I began seeing the incident as a potential subject for my next book. I didn’t know what kind of story it would be — long or short, fiction or nonfiction, but I knew there was something there and that if I stuck with it long enough, I would find it. Gradually, as I watched the replay over and over, I realized it wasn’t the play itself that was important to me. It was the play plus the time that had passed, the play plus memory, the play plus nostalgia. For me, writing the novel was a way to bring something softer and warmer to the violence: a group of men getting together for a weekend that had become something of a religious experience for them.

How did you research the subject matter?
Other than watching the video replay about 50 times and reading articles about the play, I studied the Redskins and Giants rosters. It was really important to me to know something about the 22 players who participated in the play.

There are so many “chick lit” books that center on the bonds women form with each other. Do you believe The Throwback Special takes the same approach — but from a male perspective?
Yes, although I admit I fooled myself into writing it this way. It’s not as if I came to it and said I want to write a book about contemporary masculinity or groups of men. When I was thinking about the play itself, I slowly began to contemplate teamwork and men and their fumbling but sincere attempts at connection. Like so many of us, the guys in The Throwback Special may think they’re getting together for a specific purpose other than what it really is, which is the sense of bonding the weekend brings.

One of the unusual aspects of the novel is that you don’t explain how these men met and why they decided to create this annual event. What made you decide to omit their backstories?
I know it bothers some readers that there’s not a central protagonist. The fact is, I really didn’t want readers to be too caught up with, ‘Hey, how did this start?’ Instead, I developed the premise of having the ritual be the protagonist and the men be the chorus.

Your three previous novels focus on a repeated resurrection of early 20th-century activist Upton Sinclair (U.S.!), offer a satiric take on our computer-generated society (Bear v. Shark) and describe a college professor who tackles household chores with aplomb (Abbott Awaits). What sparks your imagination?
My early books were very satirical — mostly about entertainment and politics and the culture of spectacle. But then I got married and had two kids, so my latest books are quieter, more domestic and reflect my life circumstances more.

What is the writing process like for you?
There’s an extended period of exploration, trial and error and frustration that lasts about five or six years. That’s how long it takes me to get an idea and figure out how the pieces fit together in terms of form, point of view and tone. Once all that clicks into place, I write fairly rapidly.

You created 22 characters for the book. Was it challenging to craft so many individual personas?
Yes, definitely. I took copious notes and kept a file on the vital statistics of each guy so I got the details right. If someone was initially described as having a dog, they still had to have that dog 30 pages later.

Which character in the novel is most like you?
Robert, the guy who’s always the first to arrive at the hotel, exhibits traits that mirror my own. ... Although he’s anxious and a little gloomy about life, he also truly enjoys the weekend, because it means something to him.

The men who come together for The Throwback Special are recreating a historical event by dressing up in uniforms. Why do you think re-enacting pivotal moments in history attracts so many people?
First of all, there’s an element of fantasy and make-believe and a kind of borrowed glory that’s fun: You put on the uniform and you become something larger, you become something that was historically important. But I also think there’s an element — and that’s certainly true for the men in my book — of wanting to control something. Obviously there are huge differences in re-enacting a military battle versus a football game. But both are chaotic and messy events, and both share the paradox of people attempting to control something that through their very meaning can’t be controlled.

What do you hope readers take away from the book?
I hope they’ll realize fairly quickly that the book is not about football at all, that the sport was just a way for me to gather these men together. And I hope that everyone who reads the book finds the weekend an interesting place to be for a while.

For more information about the Ohioana Book Festival, call 614/466-3831 or visit ohioana.org. 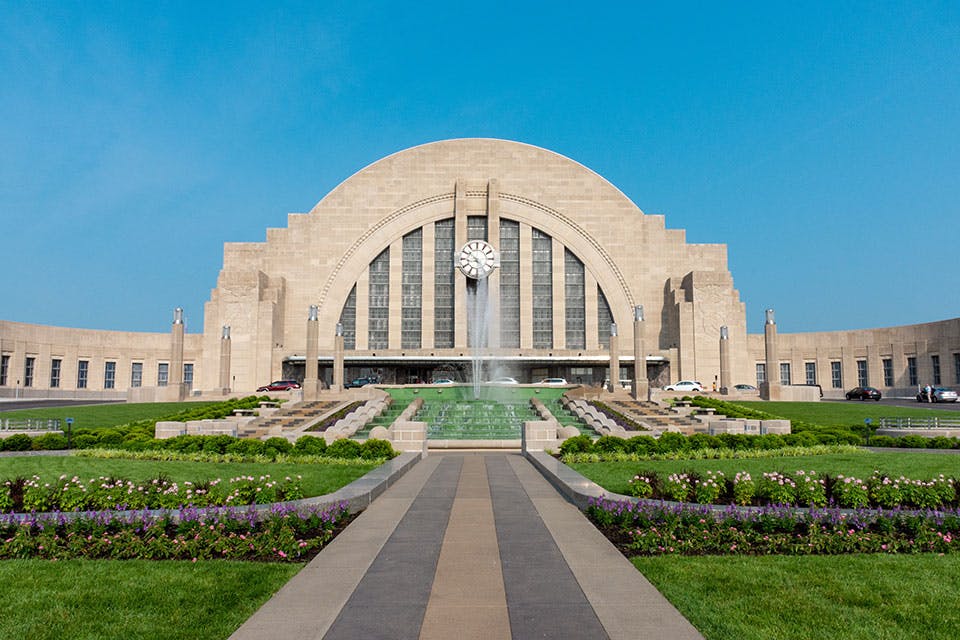 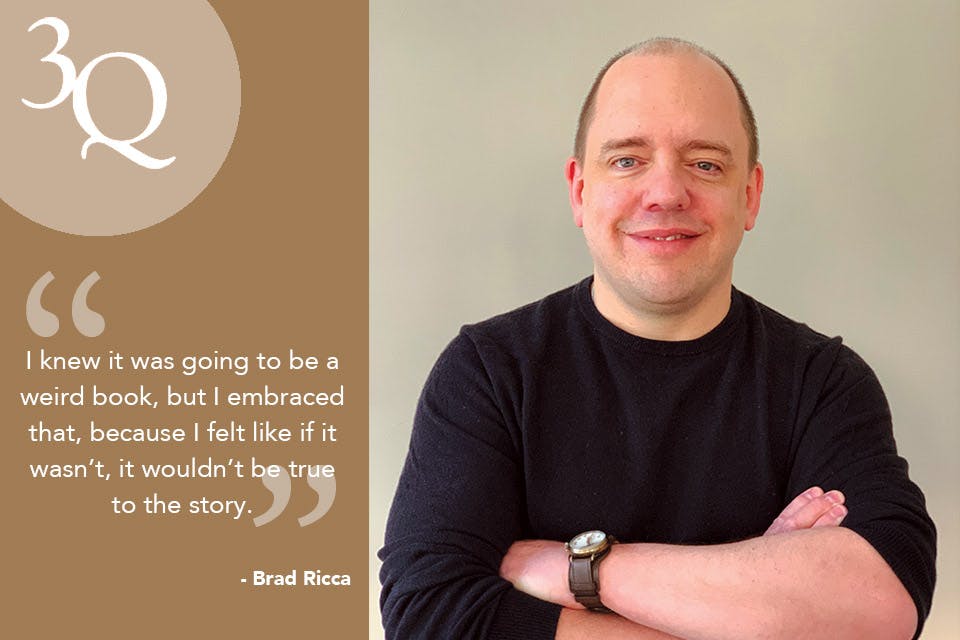 The Cleveland-based author’s book “True Raiders” delves into the details behind a real-life 1909 expedition to find the Ark of the Covenant. READ MORE >> 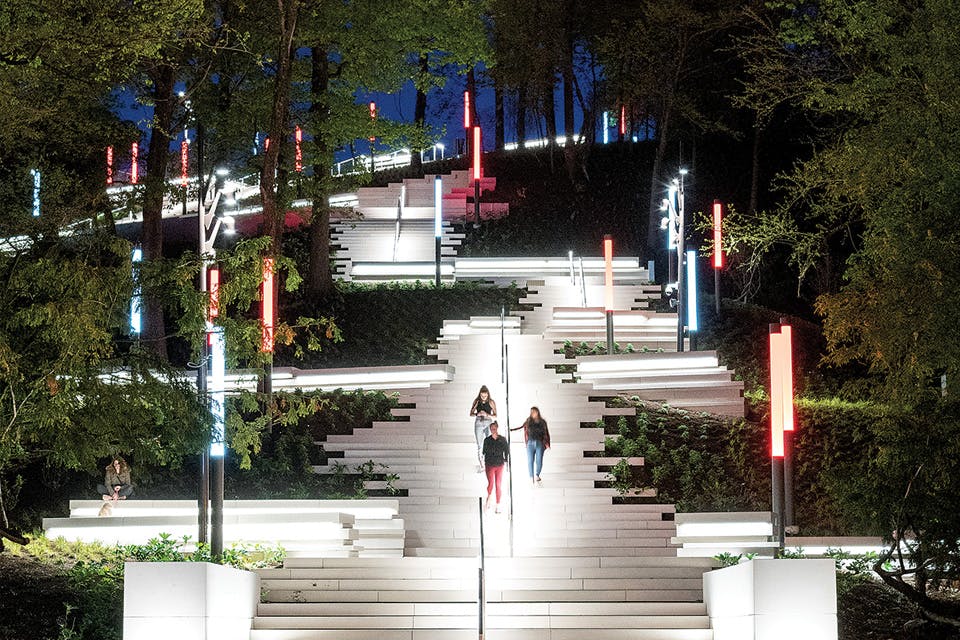 Whether you’re looking for an inspired moment or seeking a new way to get active, the Art Climb at the Cincinnati Art Museum is there for your next step. READ MORE >>