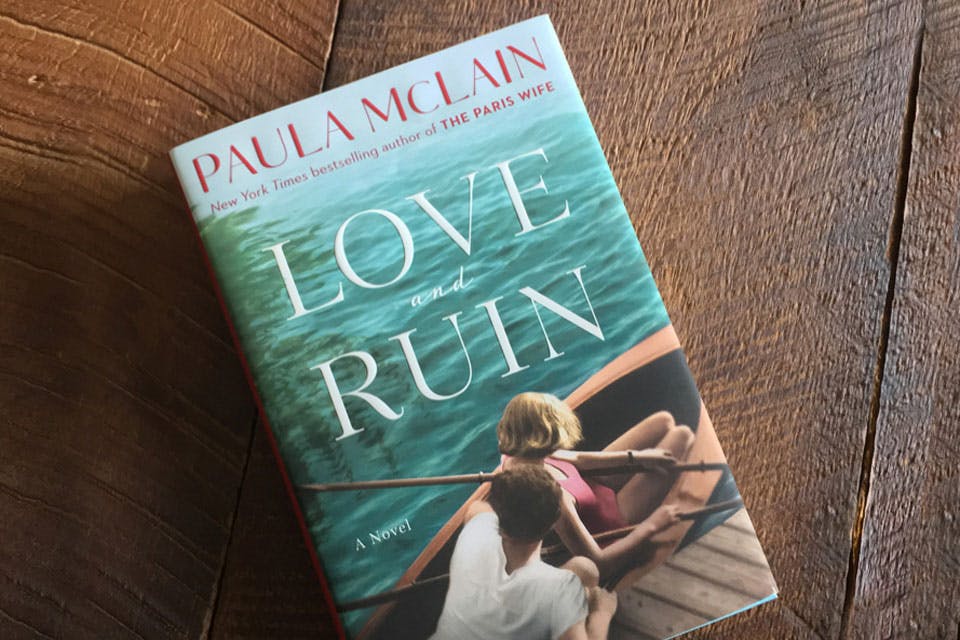 The Ohio-based author returns to the life and loves of Ernest Hemingway in her new book.

Paula McLain was convinced she’d closed the book on Ernest Hemingway, after penning The Paris Wife, a fictionalized depiction of the relationship the famous writer had with his first spouse, Hadley Richardson, during the Roaring ’20s. When the novel was published in 2011, it became a New York Times best-seller, and McLain went on to write Circling the Sun, a fictionalized account of the life of acclaimed aviator Beryl Markham.

The Cleveland Heights author was deep in the throes of pondering her next plotline — would it center around poet Edna St. Vincent Millay or the marriage of playwright Arthur Miller and actress Marilyn Monroe? — when an experience she had on a frigid winter night in 2015 dispelled any notion that she and Hemingway were through.

“I would have taken a million-dollar bet that I would never, never, turn to him as a subject again,” McLain says. “But then I had a dream that came from absolutely nowhere about fishing with Hemingway in the Gulf Stream on his boat, Pilar, along with another woman who is turned away from me. Suddenly, a marlin crests in front of her. She reaches out and puts a piece of bait in the fish’s mouth, and it takes off and the boat spins and takes off after the fish. And I think to myself in the dream, What kind of woman hand-feeds a marlin?

“When she turns around, I recognize her as Martha Gellhorn. I’m a little superstitious, so when I woke up, I knew I couldn’t throw the idea away. I Googled her, and was horrified that I had barely glanced at her life when I was doing research for The Paris Wife.”

Published last month, McLain’s newest book, Love and Ruin, is a historical novel about Hemingway’s tempestuous third marriage to Gellhorn, an ambitious, competitive, fiercely independent journalist who became one of the greatest war correspondents of the 20th century.

For more than six decades, Gellhorn was at the frontline at conflicts that included the Spanish Civil War and Russia’s war against Finland in the 1930s. On D-Day, she stowed away on a hospital ship and snuck ashore as a stretcher bearer. Gellhorn also covered Vietnam and at age 81, the United States invasion of Panama.

“Martha was the ultimate pre-feminist,” McLain says. “She did something that was entirely new for her times: Competing in a man’s world as a war correspondent. Hers was a voice I could not ignore.”

We talked to McLain about what makes a good story, why Hemingway’s words have withstood the test of time and the wisdom of following your dreams.

How did you become acquainted with Hemingway’s writing?
In high school and college, I read The Sun Also Rises and The Old Man and the Sea, which I never finished. I was more in the F. Scott Fitzgerald camp because I love language. I think of Fitzgerald as a put-er-inner because his stories were very lyrical and poetical, as opposed to Hemingway, who I call a leave-er-outer because I found his sentences to be spartan, austere and masculine. After receiving my MFA from the University of Michigan, I began teaching American literature. I picked up A Moveable Feast, Hemingway’s memoir about his early years as a writer, and became completely obsessed with it. Jazz Age Paris is so romantic, and Hemingway’s line about his first wife Hadley Richardson, “I wished I had died before I ever loved anyone but her,” became the basis for The Paris Wife. I do events all over the world, and I’ve discovered that women love to hate Hemingway. Everybody wants to tell me they basically dated a guy like him or married a guy like him.

What led you to decide that a second book about Hemingway and marriage was a worthy subject?
Once I had the idea for The Paris Wife, I really respected the integrity of it. I knew it was an excellent story about Paris, about bullfighting, about the French Riviera — it’s basically The Sun Also Rises but from Hadley’s point of view — so I just plunged headlong into it. Now, I’m an older, wiser writer, so when I had the idea for Love and Ruin, I had anxiety about whether my publisher was going to want another Hemingway book or a book in this [biographical fiction] genre at all. But the dream I had about being on the boat with Hemingway and Martha was just too vivid. It was screaming, “Pay attention to me.” The minute I Googled Martha, I fell in love with her. She is so different from Hadley. Martha is a firecracker and an iconoclast and frankly, after living with Beryl Markham and Circling the Sun for a couple of years, I wasn’t going to be able to write about a shrinking violet. Martha Gellhorn talks about being addicted to war once you live in it. And in a way, I think I’ve become addicted to these fierce women whose life and times are so intense and extraordinary you can’t look away.

What captivated you about Martha Gellhorn?
The intensity of her life, her intelligence — she follows her convictions and her conscience and devotes her entire life to giving voice to people who have no voice. How could you not admire that?

What are the most distinct differences between Hadley Richardson (The Paris Wife) and Martha Gellhorn (Love and Ruin)?
There’s nothing feminist about Hadley Richardson, who has old-fashioned values and believes in monogamy and wants a family. But what’s extraordinary about Hadley is her heart, and the fact that she has inner courage, strength and groundedness to the point where even when her world is falling apart, she stays rooted and knows who she is. And to me, that’s just so beautiful. Unlike Hadley, Martha Gellhorn has physical courage, and is terrified of being consumed by a man to the point of losing her independence. 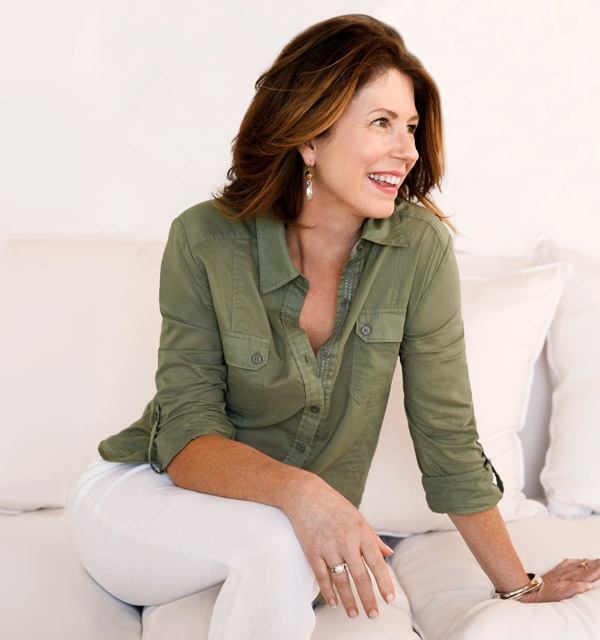 In your 2003 memoir, Like Family: Growing Up in Other People’s Houses, you describe what it was like spending much of your childhood living in foster homes. Did that experience shape you as a writer?
Oh absolutely, unquestionably it did! I’ve read that being a successful writer takes two things: having an affinity for a relationship to language and being an outsider — in other words, you have to be apart from the world in some way. Being in foster care definitely did that for me. Martha Gellhorn was always searching for love and belonging. She always thought of herself as a stranger in a strange land, and that’s how I felt growing up: very isolated, very silent. I never really talked about it. None of my friends knew that I was growing up in foster care because I was so embarrassed about it. To combat the loneliness, I lived in books. All my friends were literary characters because they felt more real to me than anybody around me. I saw no happy ending in my life, so I kept trying to find one in other people’s stories. Looking back on it, I was probably educating myself as a novelist even as I read probably 100,000 novels myself. I also think growing up in foster care made me very sensitive to the emotions of other people, which I think has made me a good writer.

What is the writing process like for you?
Well, you already know that I believe in the subconscious and follow my dreams. I think inspiration — the force that draws us to a certain place or a certain idea or certain people — is very mysterious. I pay attention and have a great deal of faith in my emotional response to everything. The minute I have an idea and I trust it, I’m like a junkyard dog. I don’t give up on it. I become completely obsessed, reading everything I possibly can, and throwing myself into the research. As a reader, I want to be completely borne up and swept away by a story. As a writer, I want to be completely absorbed by the story as if the characters have somehow become soul sisters I’ve met along the way. People tell me I have a gift for channeling the voices of the women I write about, but all I do is surrender and trust the process will take me to the book.

Your first novel, A Ticket to Ride, is the story of a teen’s struggle to be accepted by her peers during the summer of 1973. Is there a difference between writing a traditional novel and one that’s based on historical facts?
Definitely. Before The Paris Wife, I had never done research for a novel. I’ve learned it’s a lot of work, but much more fun than I ever thought it would be. For Love and Ruin, I had to completely immerse myself for about a year in the Spanish Civil War — which I knew nothing about — also the Second World War and what living in Cuba was like back then. It’s a very different experience from writing pure fiction. But what doesn’t change is the devotion.

Where did your research for Love and Ruin take you?
Well, I believe in the process of immersion, so I read dozens of first-hand accounts of war correspondents who covered the conflicts Martha did. I also spent four days at Finca Vigía, Hemingway’s house in Cuba, which Ernest and Martha purchased in 1940. When Hemingway left in 1960 because of the disintegrating relationship between the United States and Cuba, he didn’t know he would never return. So the house is much as he left it — his library is there and the whiskey is still in the bottle. Standing in his closet looking at his shoes made me weep.

Do you see parts of yourself in the women you write about?
There are parts of me in all of them because I can’t write stories that are so intimate unless I really surrender to the hearts and souls of the women I am bringing to life. But Martha is the character I identify with most, particularly in her struggles: Can you have it all? How do you have it all? All the parts in the book where she talks about the creative process, her writing schedule and the dreams and anxieties about her work — all of that is me, too. And all of the stuff about falling in love, but being terrified she’s going to lose herself — that’s essentially every relationship I have ever had. Hers is a tragic love story, but I think she became stronger for having gone through it.

Is there anything we can learn abut Gellhorn and Hemingway’s relationship?
Be careful what you wish for? Ernest’s work meant more than anything to him, and Gellhorn’s work meant more than anything to her. You’d think that would mean they were perfect for each other. But what it really meant was that they were too much alike to be able to tolerate each other.

Do you think Hemingway’s writing has withstood the test of time?
Oh yes and then some, particularly in these times. There’s always something more we can learn from his work. His writing seems so modern to me. I just re-read For Whom the Bell Tolls, [which graphically describes the brutality of the civil war in Spain,] and I found myself so full of admiration for the way Hemingway went all the way in, as though he ripped his heart off and ripped his skin off to climb into that book. It’s filled with utter conviction and selflessness.

What’s next for you?
I’m still waiting for the next good dream that will be my inspiration and sweep me away to the next good story.