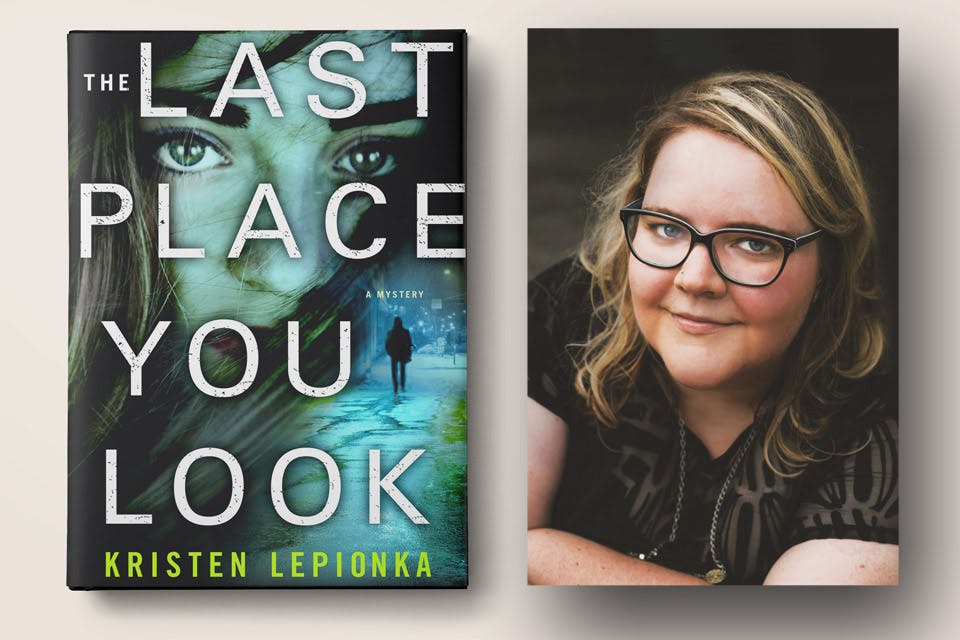 The Columbus resident’s  debut novel,  ‘The Last Place You Look,’  brings a new female detective to the literary world.

While her sixth-grade classmates were poring over age-appropriate books, Kristen Lepionka spent Saturday afternoons at the Gahanna branch of the Columbus Metropolitan Library ensconced in mystery novels by Ed McBain and Robert B. Parker.

“I was obsessed,” she recalls with a laugh. “The way they told their stories really grabbed me. Even at age 12, I was aware that the world is not a fair place and that the bad guy doesn’t always go to jail. But in mystery novels, they usually do. Those stories were a great exploration of human nature with a good ending, and that’s always been very appealing to me.”

Lepionka will add her own whodunit to the list this month when St. Martin’s Press publishes the Columbus author’s debut novel, The Last Place You Look. Set in the fictional Columbus suburb of Belmont, the story pits private investigator Roxane Weary against the city’s police force as she doggedly tries to solve a series of murders that began 15 years earlier.

We talked to Lepionka, 33, about what makes a good page-turner, her favorite Columbus haunts that made their way into her book and why so many of us can’t get enough of murder and mayhem.

Did growing up in Columbus shape you as a writer?
Definitely. Midwestern writers have a different kind of sensibility. We have big-city crime, but we also have farmland right outside the city, which makes for interesting tension between the two spheres. That’s something you don’t experience in a sprawling metropolis like New York City. Growing up in that kind of setting definitely gave me the desire to write about both big-city and little-farm-town atmospheres.

Are there any authors who’ve influenced your work?
I would say Raymond Chandler and Sue Grafton are probably the biggest influences. Raymond Chandler wrote the most beautiful prose in the world — it’s gorgeous and filled with real-world elements and believable characters who see that the bad guys get punished. And Sue Grafton is one of the pioneers of the female-private-investigator character. She opened the door and ushered in strong women who don’t need anybody’s help to solve their cases.

For two years, you’ve been the editor of Betty Fedora, a feminist crime fiction magazine. Was writing a book the natural next step?
I’d been trying to write a mystery novel for a while and have about a hundred half-finished plots saved on my computer. But this manuscript was definitely the one I felt most passionate about and most excited to get out into the world. I worked on the first draft of The Last Place You Look for about six months and finished it in May 2015. Then I wrote a second draft and ignored it for six more months. Then I heard about a writing contest called Pitch Wars created by author Brenda Drake. It’s like NBC’s “The Voice,” except it’s for writers. I entered my manuscript and it won, which gave me the opportunity to work with a [mentor] who helped me polish it.

How did you come up with the name Roxane Weary for your protagonist?
I always have ideas floating in and out of my head, and the idea for Roxane really started with her name. I’ve never met anyone named Roxane, but the name sounds like a certain kind of person — someone who is cool and tough — and I loved it. So I spent awhile thinking about what kind of last name she should have. I was watching television and saw actor [Jake] Weary and thought, That’s it. That’s the name. As soon as I put that together, I got all these ideas about her personal life. Those details came first before I realized what kind of case she’d be working on.

Are there special challenges that arise in penning a mystery?
Yes. In other forms of fiction, authors need to create narrative tension and thematic suspense but don’t have to worry about placing clues so readers can follow along. As a mystery writer, you don’t want to finish writing a novel and then on the second-to-last page, reveal: Oh, the killer is this person nobody ever heard of and wasn’t even in the book.

What makes a compelling story?
As a reader, you want an ending that is unexpected but seems totally inevitable — the kind of ending where everything makes perfect sense and falls into place.

Why do you think so many of us are drawn to mystery novels?
Part of the reason lies in the fact that they are intellectually satisfying because they give us a puzzle to solve. Although mystery stories are certainly entertaining, a good one allows us to feel like we are part of the story because we’re working through everything at the same time the detective is.

You mention several Columbus hot spots in your novel. How did you choose which to include?
Many of the places, like The Angry Baker and Dirty Franks Hot Dog Palace, are located in Roxane’s neighborhood or feel like places she’d like because they fit her personality. Wing’s is a crazy place: It’s a Chinese restaurant that has the most amazing selection of single-malt Scotch I’ve ever seen. Yellow Brick Pizza is a great place to chill. And I so loved L’appat Patisserie & Cafe, but it went out of business. I wanted to memorialize it in my book by still having it open.

What’s next for you and Roxane?
I’m nearly finished with the second book in the series, and what happens after that is up to my publisher. Roxane is the kind of character I can write about forever.

The Last Place You Look will be published by St. Martin’s Press on June 13. For more information, visit kristenlepionka.com.