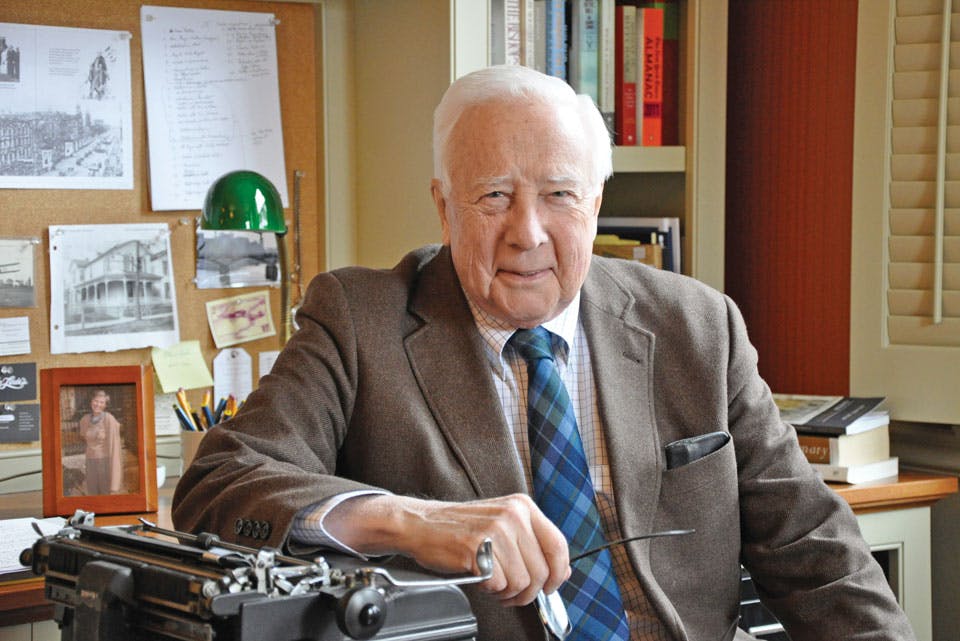 The Pulitzer Prize winner discusses his book about Orville and Wilbur Wright and how the Ohio brothers brought the airplane to the world.

Wilbur and Orville Wright’s fascination with flight began with the helicopter-like toy they played with as children. David McCullough’s fascination with the Dayton siblings who conceived of and built the world’s first airplane began a decade ago while he was conducting research for his book The Greater Journey: Americans in Paris.

“As I was writing about the artists, writers and doctors who traveled to Paris at the turn of the century, I stumbled upon the fact that the Wright brothers had been there,” he says. “I was astonished. I didn’t know any more about them beyond what all of us know from the 10 minutes they’re given in high school history — which is that they were bicycle mechanics from Ohio, and they invented the airplane.”

So the Pulitzer Prize-winning historian decided to turn his attention to the duo for his next book. Published in May by Simon & Schuster, The Wright Brothers reacquaints readers with the famous pair whose resilience despite repeated failure changed the world.

We recently talked with the 81-year-old author about why the siblings deserve yet another look and the lessons we can learn from them a century later.

So much has been written about the Wright brothers. Why did you choose them to be the subject of your new book?
I read all of the books with admiration, and I don’t have anything derogatory to say about any of them. Although I haven’t given short shrift to the aeronautical aspects of their life, it was the human side of their story that intrigued me. Over the four years I worked on the book, I never regretted my decision to proceed.

The brothers did not have college educations, yet they succeeded where others could not. What do you attribute that to?
Perseverance. Determination. Not being done in or demoralized to the extent of quitting by failure or by success denied. Again and again, they’re up against some unexpected problem, and they don’t say, “Well, that’s too much for us.” And they were brilliant. I see their lives as both a physical and intellectual adventure story of the highest order. We all get in planes and fly 30, 35, 40,000 feet above the ground and think nothing of it. Millions of people pour through our airports each year. Well, how did that all come to be? It wasn’t by chance. These miraculous men changed the world. I think that’s absolutely essential for people today to understand.

Katharine Wright, the brothers’ younger sister, played a key role in their accomplishments. Why is she so often overlooked?
I think it’s the old denial of the importance of women ... which we are now, thankfully, overcoming.

What surprised you most about what you learned while researching this book?
Three things. First of all, how they were fully [immersed] in the liberal arts. I love the fact that the brothers cared about art, music and architecture, read good books and wrote superbly. Second, was the role Katharine played. I love her feistiness and humor and the fact that she had total faith in them and kept them on track. And, finally, there was the story of Oliver Crook Haugh, the young man who hit Wilbur in the teeth with a hockey stick. A few years later, he turned out to be a notorious mass murderer, who was executed in 1906.

What impresses you most about the brothers?
I think one of the things that’s so important to understand about the story is that they didn’t just invent the airplane — they invented how to fly the airplane. That’s crucial to understanding their success. They didn’t sit on the sidelines and let anyone else fly their machine. And of course, every single time they went up — 50 or 100 times a year — they knew they had a good chance of getting killed. That took phenomenal courage. And we must not forget their impeccable character. They weren’t snobs or glory hounds.

Although the brothers made headlines in Europe, they received little attention in America. Why do you think that was so?
Well, I think because, among other things, there were a number of crackpots who claimed to be flying new machines that would go up in the air. When Samuel Langley, one of the most respected scientists in the nation, failed in his initial attempts to develop a flying machine [despite receiving a $50,000 grant from the U.S. government], Americans were very cautious about anybody else who came along with such a notion. Why the press was so totally disinterested is a puzzle. When the city editor of the Dayton Daily News was asked later why for so long nothing was reported of the momentous accomplishments taking place nearby, he said, “I guess the truth is that we were just plain dumb.”

Why was the Smithsonian reluctant to acknowledge the brothers’ achievement, crediting American astronomer and physicist Samuel P. Langley instead?
I think it had to do with the people who were leading the Smithsonian at the time, and they wanted to confirm the crown on one of their own [since Langley served as the Smithsonian’s third secretary and founded the Smithsonian Astrophysical Observatory]. It was corrupt, a sham and inexcusable. [Finally], in 1928, the Board of Regents of the Smithsonian at last passed a resolution declaring “to the Wrights belongs the credit of making the first successful flight with a power-propelled, heavier-than-air machine carrying a man.”

Wilbur died in 1912 prior to the onset of World War I. How did Orville, who died in 1948, feel about their invention being used as a weapon of war?
The brothers thought it would be used for reconnaissance, which would be a deterrent to war, not a weapon of war. I thought Orville was very honest and very realistic when he said that, like the invention of fire, airplanes could be [used] for good or evil. And so it’s been.

What can we learn from the Wright brothers?
Their story is filled with powerfully important lessons for all of us about not letting accomplishment go to our heads, about having high purpose in life and doing work we love, about not lusting for fame or wealth. For the Wright brothers, it was the climb up the mountain, not being on the top of the mountain, that meant the most to them. They also are an example of the fact that you should never fail to have gratitude for the advantages you had in the way you were raised. I love Wilbur’s line when he was asked what can we learn from his life on how to succeed, and he said, “Pick out a good father and mother, and begin life in Ohio.”

What’s next for you?
I truly have no idea. I keep a list of possible ideas, and there must be eight or nine of them on the list right now. I’ve never undertaken a book about a subject I know a lot about because if I know all about it, I wouldn’t want to write the book. For me, the process, the effort of writing a book, the reward, is the journey of discovery — of being on the detective case as it were.

Is it true that you still create your manuscripts on a Royal manual typewriter?
I do indeed. When I first worked at Time and Life, we were issued Royal manual typewriters the way someone in the army is issued a rifle. So, when I set out to write my first book 50 years ago [The Johnstown Flood], I paid $50 for a 25-year-old secondhand Royal typewriter to use at home. I’ve written on it ever since and there’s nothing wrong with it. All I have to do is change the ribbon and sometimes the roller padding. It’s an example of superb American manufacturing. There’s no planned obsolescence in this machine. And I like the feel of pressing the keys and hearing the bell ring.