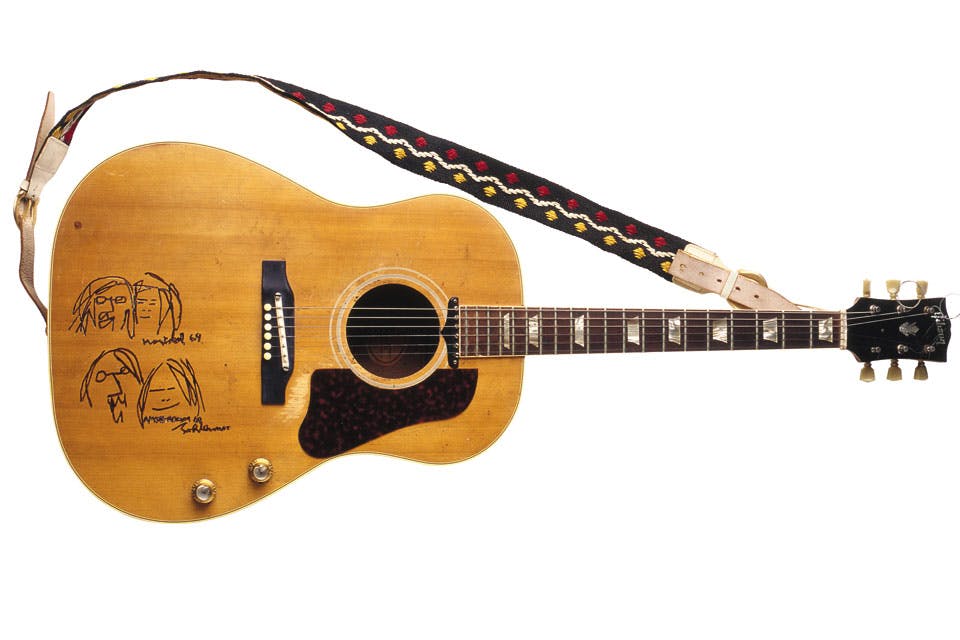 Seven years after receiving an honorable discharge from the U.S. Army, Pvt. Jimi Hendrix took the stage at 1969’s Woodstock music festival and played a fuzz-filled rendition of “The Star Spangled Banner” on his electric guitar that would define a generation and ensure his status as a rock ’n’ roll icon.

“Although Hendrix had been a soldier, clearly he was putting criticism about war into his performance,” says Jason Hanley, vice president of education and visitor engagement at the Rock & Roll Hall of Fame in Cleveland. “He’s got the sound of bombs in there and the sound of machine guns. His guitar, in effect, is speaking volumes.”

The ivory 1968 Fender Stratocaster the former paratrooper played the national anthem on at Woodstock is one of 37 artifacts being showcased at the Rock & Roll Hall of Fame in “Louder Than Words: Rock, Power & Politics.”

On display through Nov. 27 before heading to the Newseum in Washington, D.C., the exhibition takes a riveting look at how music has influenced attitudes about patriotism, peace, equality and freedom for more than 60 years. Filled with memorabilia, multimedia performances and taped interviews, “Louder Than Words” explores a range of relevant topics, including civil rights, LGBT issues, feminism, war and peace, censorship and political causes.

“When we started putting this exhibit together, we began talking about the fact that no matter where we’ve been as a country since the mid-20th century and where we’re headed now, rock ’n’ roll was and still is at the forefront,” Hanley says. “It’s been such a time of turbulence within the United States and around the world. ‘Louder Than Words’ is designed to showcase how the music grew up in this period, began responding to all the things ... and, in so doing, challenged the system.”

The exhibition begins in the 1950s, when rock burst on the scene in all its rebellious glory. While teens embraced the vibe of Chuck Berry and Little Richard, their parents were not as enthralled.

“Rock challenged the status quo,” Hanley explains, “and since there were black artists being played on the radio, segregation reared its ugly head. It was there already, but rock ’n’ roll became the lightning rod that brought it into the public consciousness.”

Known as the King of Soul, American singer-songwriter Sam Cooke responded to the racism around him by penning the anthemic “A Change Is Gonna Come” on his 1958 Kumalae ukulele, which is featured in the exhibition. Though only a modest hit at the time, the song became the touchstone of Cooke’s legacy following his death in 1964.

“Sometimes an artifact represents not just the thing it is, but the moment,” Hanley says, pausing before the display case containing the gray felt cloche studded with Swarovski crystals Aretha Franklin wore when she sang “My Country, ’Tis of Thee” at President Barack Obama’s 2008 inauguration. “Think about the fact that it is Aretha Franklin performing at the inauguration of our first African-American president; and the fact she sang “Respect” in the 1960s, which became both a women’s liberation and civil rights song; and that she recorded a [version] of Sam Cooke’s ‘A Change Is Gonna Come.’ This hat is a piece of fashion that not only represents Aretha but also American musical royalty.”

As the 1960s commenced and America’s participation in the Vietnam War escalated, music mirrored the discord that divided our country.

“Of all the artifacts in the exhibit, this is the one that literally gives me a chill every time I see it,” Hanley says, while gazing at the 1964 Gibson J-160E guitar that belonged to John Lennon. The former Beatle strummed it while singing “Give Peace a Chance” during the bed-ins for peace he and wife Yoko Ono staged in Amsterdam and Montreal during the spring of 1969.

“This instrument transcends its physical nature,” Hanley says. “It stands for something much larger about us and humanity than just the wood and the strings that are on it. The fact that this is the guitar that John sat with at the bed-ins, peaceful protests where he brought together poet Allen Ginsberg and Timothy Leary to sing the song with him, stands for something that still resonates today.”

Lennon’s palatial harmonies stand in stark contrast to the adjacent display case containing a shirt worn by Johnny Cash onstage while performing “The One on the Right Is on the Left,” written by country singer Jack Clement to criticize musicians who espouse political views in song: “Don’t go mixing politics with the folk songs of our land/ Just work on harmony and diction/ Play your banjo well/ And if you have political convictions keep them to yourself.”

“There’s this belief that rock ’n’ roll tends to be very left-leaning. But there are instances throughout the exhibit where the other side of the aisle is represented,” Hanley says, pointing to the copy of Staff Sgt. Barry Sadler’s 1966 45 RPM single, “The Ballad of the Green Berets,” displayed next to the Cash memorabilia. One of the few hit songs of the decade to cast the military in a positive light, it was written by the combat medic as he was recuperating from a leg wound incurred in Vietnam.

As the “Louder Than Words” artifacts attest, time ticks on, as do the convictions resonating with today’s troubadours — from the dress made of raw meat Lady Gaga wore in 2010 to symbolize that “if we don’t stand up for what we believe in … pretty soon we’re going to have as much rights as the meat on our own bones” to the score for “Alright,” written by American rapper Kendrick Lamar last year to support Black Lives Matter, an activist organization campaigning against violence and police brutality targeting African-Americans.

“No matter what side of the political aisle you’re from, everyone enjoys music,” Hanley says. “It’s my hope that this exhibit will encourage you to go below the surface and have conversations that are much deeper than you’ve ever had before.”