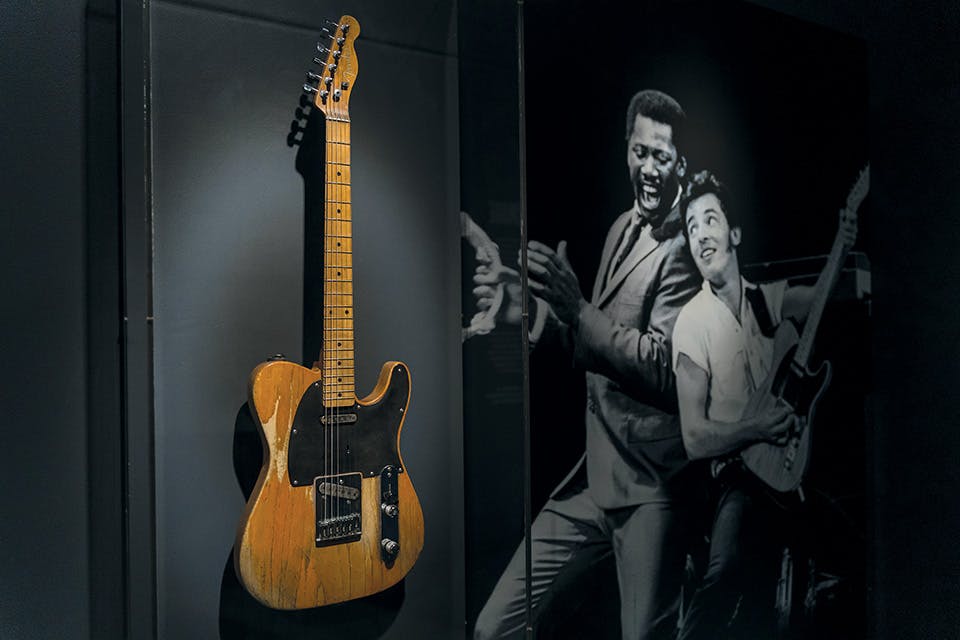 ‘Play It Loud: The Instruments of Rock & Roll’ in Cleveland

An exhibition co-organized between the Rock & Roll Hall of Fame and New York’s The Metropolitan Museum of Art highlights some of rock music’s most iconic tools of the trade.

The guitar has an almost palpable presence as you stand in front of it. Housed within a clear case and bathed in soft light, Bruce Springsteen’s most cherished musical instrument is presented next to a life-size black and white photograph of The Boss back to back on stage with the E Street Band’s Clarence Clemons.

This is the guitar on the cover of the “Born to Run” album. It’s also the instrument most identified with Springsteen. Created from a Fender Telecaster body and a Fender Esquire neck, it was his primary live and recording guitar from 1972 to around 2005. You almost can’t believe he could or would be apart from it.

Such discoveries are common while exploring “Play It Loud: The Instruments of Rock & Roll,” on display at the Rock & Roll Hall of Fame through Dec. 31. Co-organized with New York’s The Metropolitan Museum of Art, it celebrates the beauty, craftsmanship and mileage of the instruments that created some of our favorite music.

“It’s interesting because the Metropolitan Museum ... they are all about the object and the instrument as a piece of art,” explains  Karen L. Herman, vice president and chief curator at the Rock & Roll Hall of Fame. “The Rock Hall looks at it as, ‘Yes, they are beautiful instruments, but they’re tools of the trade.’ We really tried to combine that.”

The exhibition, which is so large it is presented across multiple floors, has instruments ranging from the electric piano Led Zeppelin’s John Paul Jones played on the recording of “Stairway to Heaven” to the mandolin Peter Buck of R.E.M. used to create “Losing My Religion.” A “Guitar Gods” section houses Jimi Hendrix’s Gibson Flying V, Pink Floyd guitarist David Gilmour’s go-to black Stratocaster and bluesman Stevie Ray Vaughan’s well-worn “Number One.”