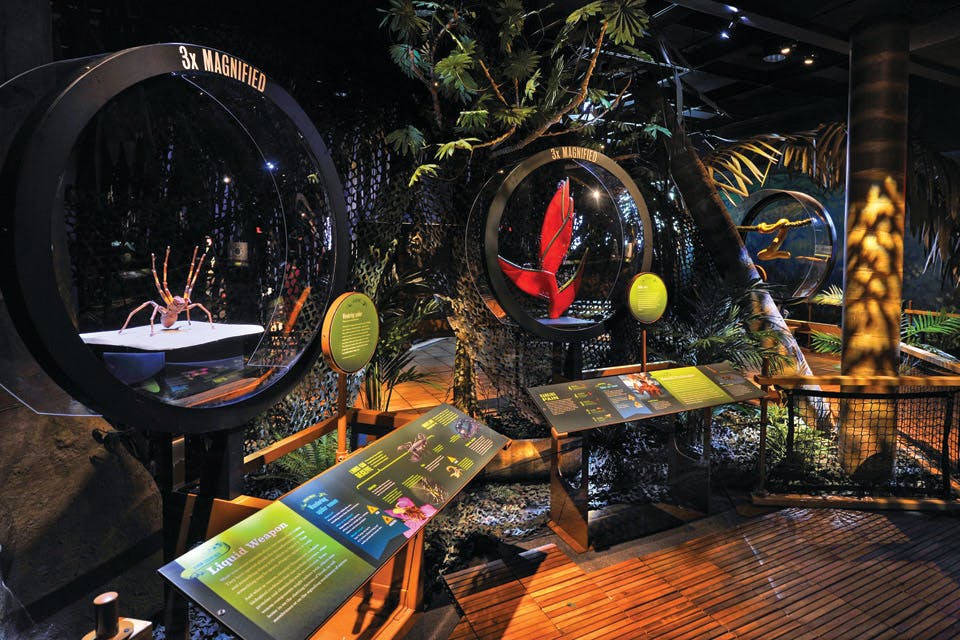 From venomous snakes in the wild to the witches that stir the cauldron in Shakespeare’s Macbeth, poison fills us with a sense of danger and awe. But it also promises new possibilities in the fields of healthcare and forensic toxicology.

We asked Nicole Burt, a postdoctoral fellow of human health and evolutionary medicine at the museum, to give us a dose of what visitors can expect.

In Nature: The exhibition greets guests with an immersive experience that mimics Colombia’s Chocó Forest. This section highlights how organisms have developed adaptations to survive, including the golden poison dart frog, whose consumption of poisonous beetles makes its skin poisonous to the touch. “One frog is estimated to have enough poison to kill 10 adult humans,” Burt says. Some of the other organisms highlighted in the exhibit are of the less-deadly variety. “Things like poison ivy has urushiol, [an oil] which is what we’re allergic to,” she adds.

In Literature: The myths and legends section covers how the human imagination has run wild with the idea of poison, dating back to ancient Greek and Chinese cultures and continuing on through J.K. Rowling’s Harry Potter series.  This portion of the exhibition explains that the Mad Hatter character from Alice’s Adventures in Wonderland was loosely based on mad hatter syndrome, a form of mercury poisoning caused by the hat-making process that was familiar to author Lewis Carroll’s 19th-century readers. “The Mad Hatter character would have been a trope [the audience] would have recognized,” says Burt. “That was part of the joke at the time, that people were as mad as a hatter.”

In Medicine: It can be easy to forget that the benefits of poison have helped humans thrive as a society. “People overlook how much of our medicine comes out of stealing other [organisms’] defenses,” says Burt, pointing to the creation of the antibiotic penicillin as an example. “We didn’t have a good defense against bacteria, so we stole it from a fungus.” Visitors also learn that from a medicinal standpoint, poisons can have multiple functions. Warfarin, for example, is used as both a rat poison and a common heart medication. In addition, this portion of the exhibition includes a live beaded lizard, which has a poison that is used to treat Type 2 diabetes.