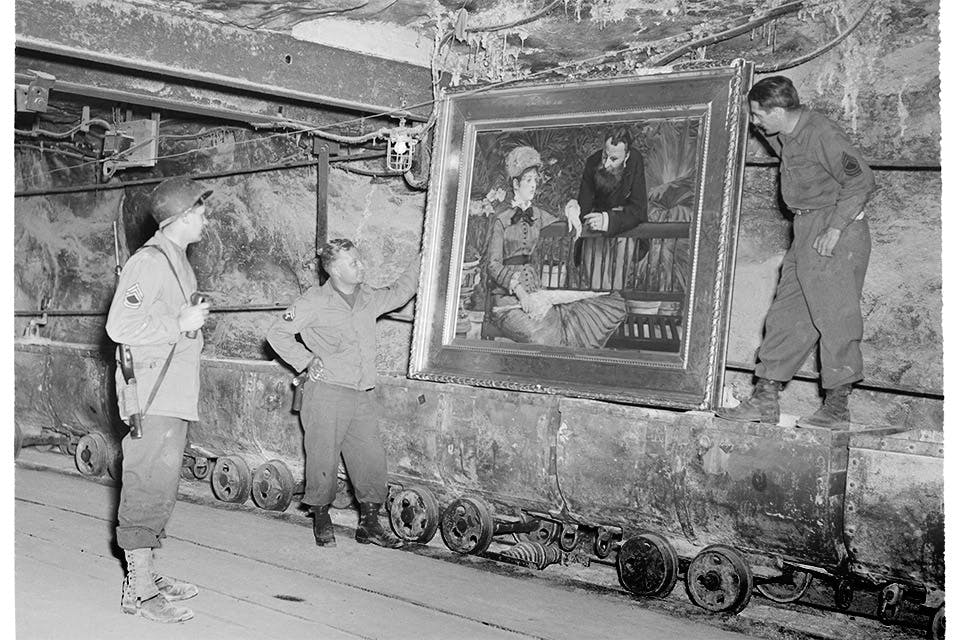 ‘Paintings, Politics and the Monuments Men’ in Cincinnati

In 1945, 202 European paintings traveled from Berlin to the United States, after the U.S. Army discovered that Nazis had hidden them in a German salt mine. The National Gallery stored the paintings, and the works visited 14 cities during 1948 and 1949 before they returned to Germany, setting off an international controversy about the rightful owners of art taken by Nazis during the war.

“Paintings, Politics and the Monuments Men,” at the Cincinnati Art Museum from July 9 through Oct. 3, explores the event and the Monuments Men, an international group of historians and curators who sought to protect works of art and return them to their owners. On view are four of the paintings that appeared on the 1948–49 tour on loan from the State Museums of Berlin, as well as a selection of paintings from the Cincinnati Art Museum’s collection.

“We’ve seen more restitution cases and with some of the tragic things that are happening to artworks in parts of the world that are war torn, the topic of art in war seems so timely to us,” says Peter Jonathan Bell, curator of European paintings, sculpture and drawings at the Cincinnati Art Museum and co-curator of the exhibition with Kristi A. Nelson, executive vice president for academic affairs and provost at the University of Cincinnati. “A lot of people are starting to think again about our role in protecting the cultural heritage of the world.”

The result is an exhibition that puts current events into historical context through works like Sandro Botticelli’s “Ideal Portrait of a Lady,” an Italian painting depicting a beautiful woman in profile that appeared on the tour, and Oskar Kokoschka’s “Portrait of the Duchess of Montesquiou-Fezensac,” a 1910 expressionist painting from the Cincinnati Art Museum that was once part of a German museum’s collection and sold by Nazis. Also displayed are works donated to the museum by Walter Farmer, a Cincinnati man who led the creation of the Wiesbaden Manifesto, a document protesting the 1945 transfer of paintings belonging to the German people to the United States.

“We’re really delving into a moment in 20th-century world history,” says Bell. “I’m hopeful this will reach new audiences through this military history aspect. The paintings are one part of the exhibition, but it’s about so much more.”