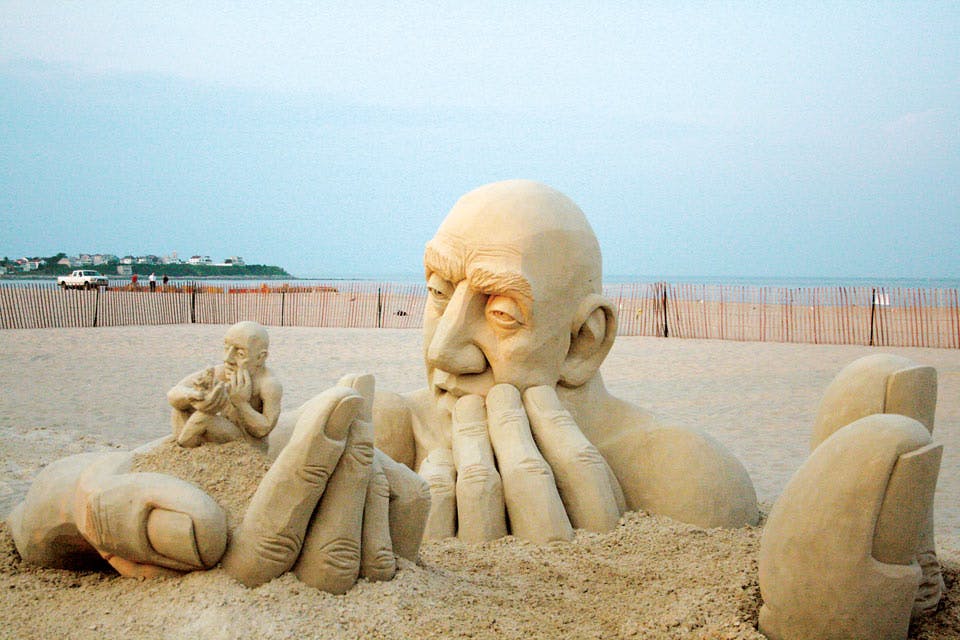 More than once, sand sculptor Carl Jara has finished one of his monumental masterpieces only to witness half of it collapse. But during one festival that focused on recycled materials, the catastrophic cave-in turned out to be alright.

“I walked over to my sculpture where three people were [now] standing,” Jara recalls, adding the onlookers thought the collapse was part of his design. “They said, ‘How did you do this? It’s so poignant! So breathtaking! So perfect!’ So, I patted myself on the back.”

That victory was one of many Jara has had since he built his first sand sculpture in 1991. The artist, who lives in the landlocked Cleveland suburb of Lyndhurst, has created works ranging from a Tiki god to pensive monsters to a creation inspired by the popular children’s book A House for Hermit Crab. In all, he has created works for hundreds of exhibitions, festivals and competitions, and his clever sculptures often have humorous touches, dark sides and mysterious twists — sometimes all in the same work.

Jara was an illustration and graphic design student before turning to sand, studying under Tom Morrison, president for life of the International Association of Sand Builders. Jara has won 14 world championship medals and claimed first place in 2008.

“It’s all a matter of material,” says Jara, recalling work he did on the British Virgin Islands’ Necker Island, which is owned by billionaire Richard Branson. “I took one step on that beach and sunk into the sand all the way to my knees. I knew I was in trouble. I made something that looked like something teenagers on Lake Erie would make, because I couldn’t get the sand to stand up more than three inches before it collapsed.”

Many professional sand sculptors plan their designs ahead of time. Jara usually doesn’t know his design until the night before the contest, if he even does then. But he says an idea always comes to him, often based on what’s happening in the world or his own life.

“The only thing I won’t make are sandcastles. They are way too cliche,” he says. “But a little part of me is dying to do it someday and in front of my peers who have been hearing me pooh-pooh the idea for decades.”