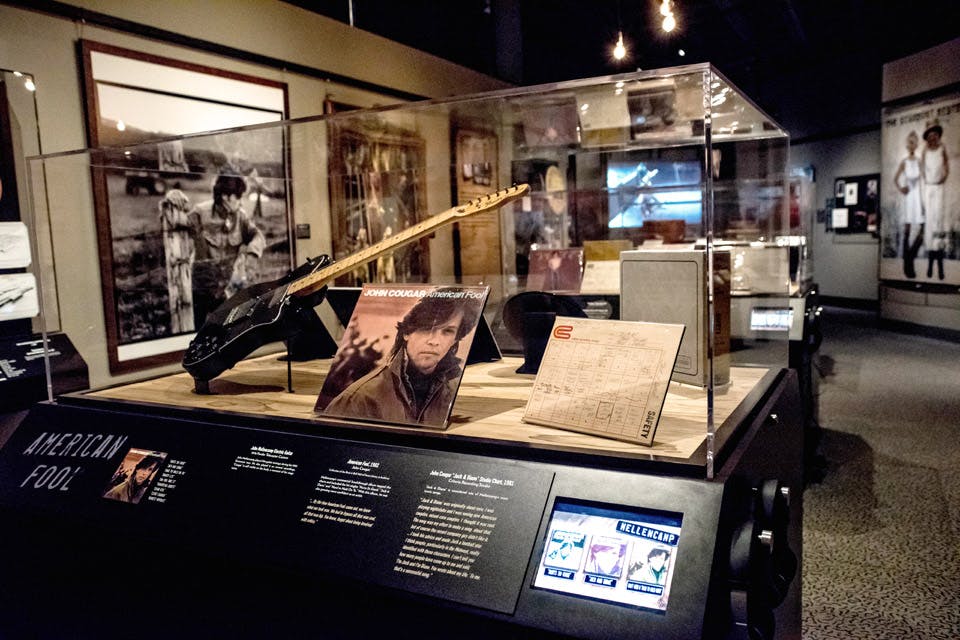 The Rock & Roll Hall of Fame delves into how would-be teen idol Johnny Cougar reclaimed his name and became the musical poet of the Midwest.

John Mellencamp’s silver 1965 Honda motorcycle is parked at the entrance to the exhibit space under a black-and-white portrait of the musician leaning against a wire fence — an image fans will instantly recognize as the photograph from the cover of his five-time-platinum album “Scarecrow.”

The bike looks well maintained, almost new, which makes it all the more surprising to learn from the accompanying placard that Mellencamp has had it since high school. That fact is listed just above a quote from the musician: “As long as I had a guitar, some food, a motorcycle and some beautiful arms to fall into ... that’s all I ever wanted.”

“Mellencamp,” the Rock & Roll Hall of Fame’s newest exhibition, traces the artist’s evolution from would-be teen idol to heartland rocker to socially conscious co-founder of Farm Aid. It features more than 100 of Mellencamp’s personal items, ranging from guitars to handwritten lyrics to a selection of the vibrant paintings that have become another creative outlet for him over the the past three decades.

Mellencamp’s 2008 induction into the Rock & Roll Hall of Fame would be reason enough for a career retrospective, but Karen Herman, the Rock Hall’s vice president of curatorial affairs, says it seemed especially appropriate now given how relatable so many of the themes in his music are today.

“Particularly with what’s going on economically in this country and people feeling a bit dispossessed,” she says. “That’s where John Mellencamp comes from and what he writes about.”

Organized around the evolution of the musician’s name, the exhibition begins with the one he was given at birth: Slate Mellencamp. Born with spina bifida, he had to undergo an experimental surgery as a baby that saved his life.

Afterward, his parents renamed him John J. Mellencamp, and he grew up in the farm town of Seymour, Indiana, with four siblings and a creative mother who painted in her free time. Rock ’n’ roll consumed him starting in his early teens, and in 1973, he traveled to New York City to work with Tony DeFries, the pop-music manager who helped David Bowie achieve fame. But the opportunity didn’t come without complications, particularly the requirement that Mellencamp change his name.

“When he finally makes it, when he finally gets that break and goes to New York, what’s the first thing they do to him when he signs? They tell him, your name isn’t John Mellencamp. It’s Johnny Cougar,” says Herman. “He was fighting that name for the rest of his career — even now.” 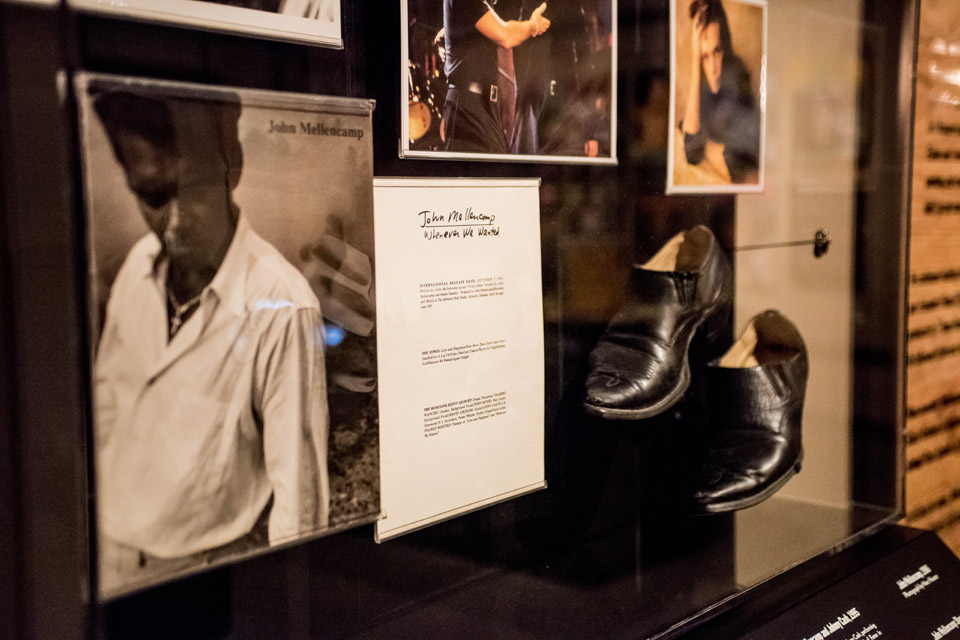 Like the Rock Hall’s previous exhibitions on Paul Simon and Graham Nash, “Mellencamp” is presented in a portion of the Ahmet M. Ertegun Main Exhibition Hall that seems particularly suited for a single-artist focus. Listening stations throughout the space allow guests to hear from Mellencamp in his own words — part of a wide-ranging interview he did with the Rock Hall to illuminate and give dimension to the pieces on display.

“I got a very strong sense that he’s a fighter, he’s a rebel, he’s not going to let anybody tell him what to do,” Herman says of the conversations she’s had with Mellencamp. “He’s his own person, and he’s very complex.”

The years between 1982 and 1987 marked a time of personal growth and artistic evolution for the musician, and the exhibition gives appropriate attention to “American Fool,” “Uh-Huh,” “Scarecrow” and “The Lonesome Jubilee” — an era that saw Mellencamp reclaim his surname and produce some of the most important music of his career.

The typewritten first draft of the lyrics to “Small Town,” arguably the song he is most identified with, are displayed alongside a handwritten second version. The original studio chart from the recording of Mellencamp’s 1982 No. 1 single “Jack & Diane” rests inside a case highlighting “American Fool,” along with a black electric guitar from that time. (A close look reveals the word “Cougar” once written across the front of the instrument has since been scratched away.)

Sometimes an item, such as a test pressing of Mellencamp’s 1987 single “Cherry Bomb,” offers a window into the culture of the time through Mellencamp’s own recollections. When the video for the song, which featured a black man dancing with a white woman, prompted a threatening letter, he made an appeal: “I went to my friends at MTV, said you’ve gotta play this thing more. You’ve got to break this race barrier. That was really the accomplishment of ‘Cherry Bomb.’ ”

By that time, Mellencamp had already cemented himself not only as a rock star, but a voice for the Midwest. His 1985 album “Scarecrow” addressed failing family farms and fading dreams. Much like Woody Guthrie captured the plight of the Dust Bowl era, Mellencamp was writing his own chapter. 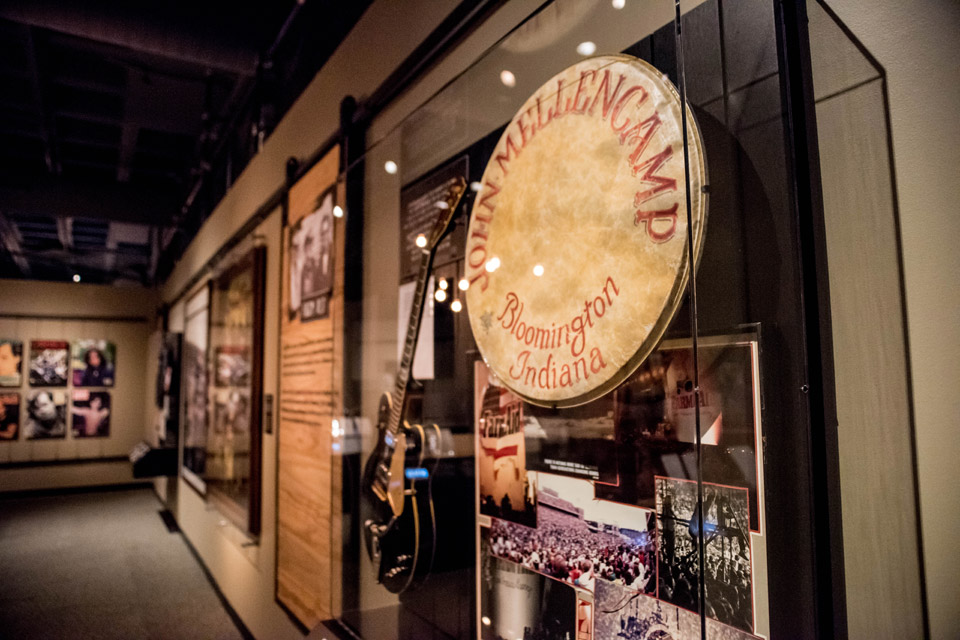 The exhibition traces the evolution of Mellencamp’s name and dedicates attention to his role as a co-founder of Farm-Aid (above) as well as his career as a visual artist. (photo courtesy of Rock & Roll Hall of Fame)

“John Steinbeck is a huge influence on him, Tennessee Williams — these people who had that mentality of looking beyond themselves and looking at the greater world and seeing all the inequality,” says Herman. “That really resonated with him as he grew intellectually and started to think about how you do that in songwriting.

“For him, it was making the songs very simple, almost minimalist, to tell those stories. ... I think he’s really on the same pathway as some of the writers of great literature.”

It was around this time that Mellencamp teamed with Willie Nelson and Neil Young to create Farm Aid — an annual concert and year-round crusade to raise money to help family farmers throughout the United States. A display case in the exhibition features photographs from the annual concert as well as a Neil Young guitar Mellencamp won in an arm-wrestling match.

Sprinkled throughout the music memorabilia are paintings, which become more plentiful the deeper one travels into the exhibition and the timeline of Mellencamp’s career. Herman says visual art is where the musician focuses much of his creative energy these days, although he still records and tours. His 22nd album, “Plain Spoken,” was released in 2014.

Mellencamp’s canvases burst with vibrancy, awash in bold colors and strokes. One large canvas of a guitar-playing man serves as a self-portrait, while another casts actresses and friends Meg Ryan and Laura Dern as 1930s-era clowns.

One of the most striking works on display, titled “Gates of Hell” and painted during Mellencamp’s 1992 divorce, depicts a couple standing side by side with two snarling dogs — a piece that art writer Hilarie M. Sheets compared to Grant Wood’s “American Gothic.” The work is dark and edgy, and, much like Mellencamp’s music, it radiates with energy.