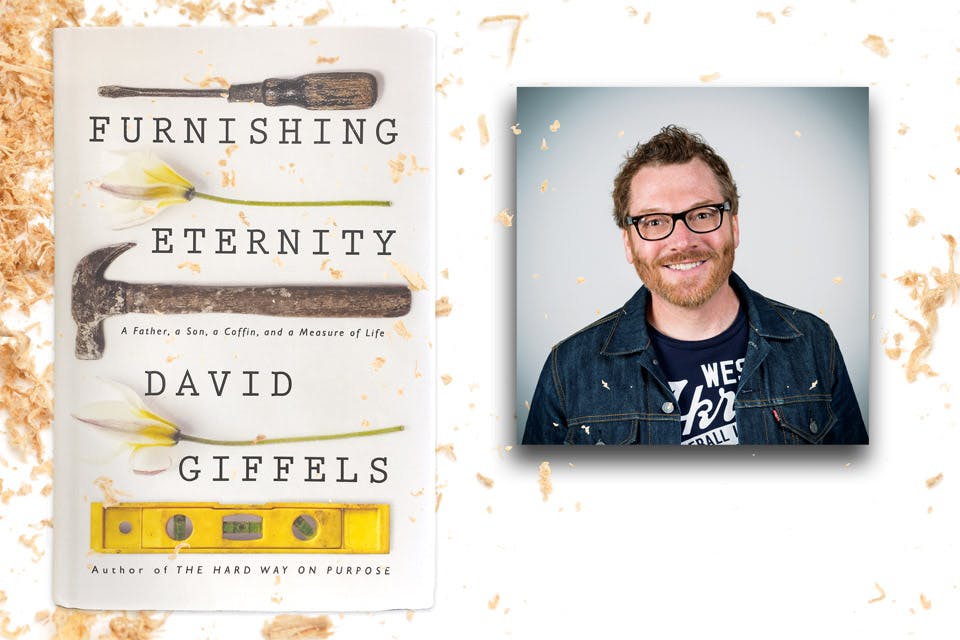 Life According To … David Giffels

The Akron author takes on the most unusual of projects: building the coffin in which he will one day be buried. Giffels shares what he learned along the way.

He wrote four episodes of “Beavis and Butt-Head” and co-authored books about the rock band Devo and the rubber industry, but Akron resident David Giffels feels most at home when he gets personal. The associate professor of English at the University of Akron has penned intimate reflections that include The Hard Way on Purpose: Essays and Dispatches from the Rust Belt; and All the Way Home: Building a Family in a Falling-Down House, a book chronicling the challenges he faced while restoring the 1913 Tudor in Akron’s Highland Square neighborhood where he, wife Gina and their two children have lived for 20 years.

In his latest memoir, Furnishing Eternity: A Father, a Son, a Coffin and a Measure of Life, Giffels, 53, takes his thoughts to a plane that’s achingly universal: He describes the emotional struggle of coping with the deaths of his mother, uncle and best friend in a year’s time, and the stark realization of his own mortality as he watches loved ones age. All this happened as Giffels was in the midst of an unusual project: building his own coffin with his father, Thomas.

Deciding to build my own coffin was not a profound let’s-enter-the-theme-of-mortality issue at all. [My wife] Gina and I had been having this ongoing, semiserious debate about the nature of a funeral and a burial, which heightened in 2010 after her father died. We were at the funeral home to select a coffin. It had been a running joke between us that when I died, she should just throw me in a cardboard box. And here, off in the corner, I saw a cardboard casket! My heart froze, and I said, “That’s what I want to be buried in.” I couldn’t believe I was standing in front of a legitimate cardboard box with a price tag on it.

Gina’s version of a coffin is very formal, and mine is very cavalier. She didn’t think it was very funny.

Somehow, in the middle of this debate, my mischievous father and I got the hare-brained idea that we could build a coffin ourselves for a lot less money and with a lot more style.

My wife was not thrilled with the idea. Like most things in a good long marriage — 30 years next year — there’s an element of compromise. As I write in the book, for some reason in my stubborn mind, I have this notion that this will never be my problem, that I’ll definitely die first and she’ll have the logistics of getting the coffin out of the house and reattaching the lid the way I left instructions for. It never really occurred to me that there may come a day when I’m all alone with my coffin.

I’m a person who tends to get myself into things I can’t get out of because of male pride. Building my own coffin was one of those situations. The deaths of my mom in July 2012 and my best friend [Akron artist] John Puglia in July 2013 crashed down into it.

My dad has all this cool, exotic, wood in his workshop, and I thought we would use that. But he already figured out we would go to Home Depot and buy a load of lumber. … So I sort of slunk into the superstore, pushed the cart and loaded up with a bunch of regular old pine and oak.

I didn’t feel it was really starting to become my own wood until I cut myself on my dad’s router as we were working and bled into the wood.

I used to be arrogant enough to believe that I choose the subjects I write about, but I’ve learned that my subjects choose me. With this book, I started out thinking, ‘I’ll write this fun romp around the idea of building a coffin.’ I didn’t think this was going to be a book about loss and grief. I thought it was going to be about this playful activity I was doing with my dad.

Through the sudden illness and death of my mom and the ongoing illness and death of John, I kept a journal, which I don’t usually do. … I had this really, really, raw, chaotic writing that didn’t make sense to me from day to day, and then I had to write my way out of it and find some kind of meaning in the chaos of humanity.

If I were to write this book 10 years from now, it would be completely different. In The Year of Magical Thinking, Joan Didion writes about how grief has these cycles. It’s not like you move forward slowly, it’s like you move forward and something just knocks you asunder one day and sends you right back. And that was happening to me. I think I probably came to the end of all that writing with a greater clarity than I would have had I not done it.

Trying to write about grief while it was still so fresh was like hanging onto the tail of a killer whale while trying to catch it. It’s driving you, you are not driving it.

My dad, who’s a master carpenter, and I didn’t know what we were getting into when we started this project. … My dad is also a retired civil engineer with a wild, creative imagination. Every time we’d start to make the sides, he’d come up with five doodads to add to them to make them more interesting but also more complicated.

It wound up taking four years to complete the coffin. It wasn’t so much that it was hard to build. The real lesson of the process was that all the things that are about life kept getting in the way. He was busy, I was busy, people were dying.

One of the things I love about working with your hands is that it engages you in an almost complete way. It takes over your movements and it also loosens up your mind, and allows your thoughts to just be. I think your creative self is unleashed when your physical self is fully engaged. Once your body is fully engaged, your imagination follows.

The first time I got inside the coffin, I felt restless because that’s my true nature. Whenever I try a little Zen and attempt to relax, I get itchy.

I hope my family will realize that someday when I’m laying in it and they have to close the lid, that there is a spirit of life in it — that it wasn’t just something purchased to bury a family member in.

At the beginning, I probably would have thought I was meeting death head on if death hadn’t met me along the way. … I think that happens whenever we lose a parent — we suddenly realize that we’re not as immortal as we thought we’d be. Of course, we already know that intellectually, but we don’t think it’s real until it happens.

I’m sitting in my office right now, and John’s picture is hanging next to my computer monitor, and my mom’s rosary hangs just to the right of where I’m working. … Being surrounded by those artifacts is comforting, and that’s why I look and talk to them.

I believe the best way to deal with grief is to give over to it and not fight against it because, in the long view, it’s cathartic.

I would never want to say that I’ve learned any lessons about death because it would sound like I figured something out. But I think if I learned anything from writing this book it’s that it’s worth trying to understand death because it puts the lives of the people you care about into sharper focus. In the simplest way, if I think that someday I won’t have Gina here as my constant presence, it makes me appreciate her more. In a larger sense, what does a life with somebody mean the way we exist now? Is my friendship with John and my companionship with Gina and my companionship with my mother — are those things larger than whatever time we had together?

The holidays can be hard. So when we decorate, we put out things that are directly related to my mom and John and Gina’s parents. In a way, they’re physically present and, by virtue of those artifacts, you have some deeper, spiritual connection to a person.

Furnishing Eternity: A Father, a Son, a Coffin and a Measure of Life, published by Scribner, will be available Jan. 2.