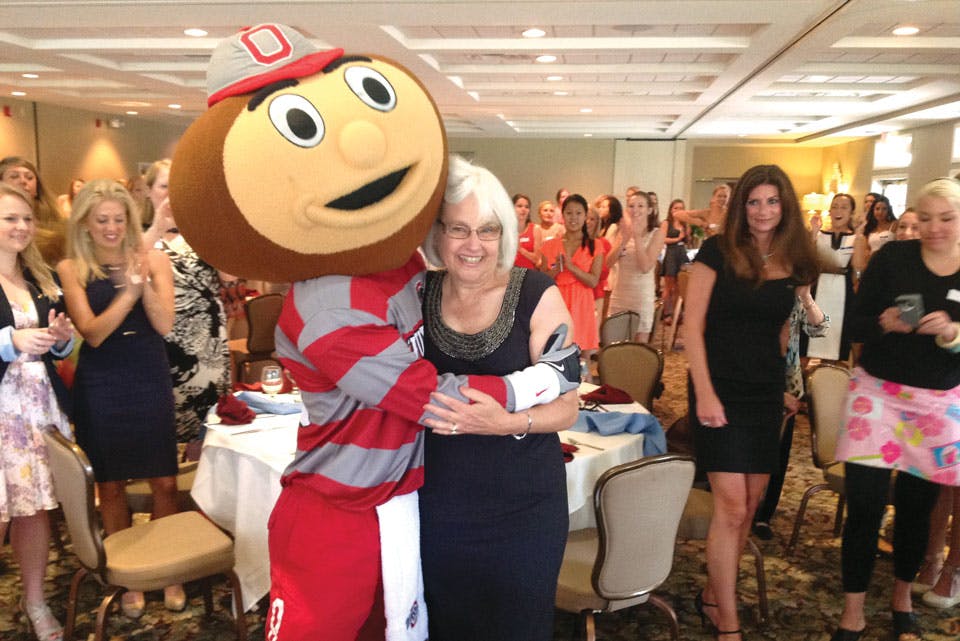 Birth of a Buckeye

In 1965, Ohio State University students Ray Bourhis and Sally Huber Lanyon had one simple goal: sneak a large papier-mache buckeye into Ohio Stadium and unveil it at the homecoming game.

“I was really nervous that this wasn’t going to go well,” recalls Lanyon. “I had seen other people run onto the field from time to time, and you would see security run out after them.”

But when the giant buckeye appeared, the crowd of 84,000 instantly knew what it was and started cheering. Soon after, it was adopted as the university’s mascot, and a campuswide naming contest was held. Bourhis recalls that “Brutus” was an early suggestion. He loved the name, but not everyone agreed.

“One of the stupid names that people wanted to call him was Bucky,” says Bourhis. “That would be totally weird, so I made sure that Brutus became his name.”

Five decades later, Brutus Buckeye is reaching a milestone, and his creators have penned The Autobiography of Brutus Buckeye to mark the occasion. Written from Brutus’ perspective, it details his creation and evolution over the years. It includes tales of Brutus kidnappings, being left at the airport and how the people who have portrayed him helped him evolve.

The story begins the day Bourhis was at the Pi Beta Phi sorority house with Lanyon, his girlfriend at the time, planning to build a float for the homecoming parade. “I said to a bunch of the sorority sisters, ‘Why are we making a float, we could be making history,’ ” Bourhis recalls.

After doing some research, Bourhis and Lanyon were surprised that in its nearly 100-year existence, Ohio State University never had a mascot. “Our first thought was to do a deer — a buck’s eye — but you’re not going to bring a deer onto the field,” Lanyon says. “I grew up in Ohio, and I knew the Buckeye was the state tree. So, it had to be a buckeye.”

The original version of Brutus was not strong enough to travel, so Bourhis had one made out of fiberglass. It wasn’t until 1981 that Brutus lost his sphere-like shape, growing into the lovable version known today.

After graduating from Ohio State, Bourhis and Lanyon moved on to successful careers. Bourhis works as a lawyer in California, and Lanyon is an organizational development consultant in Arizona. They are both pleased with how Brutus has changed over the years, as well as the place he has in history.

“That has been an amazing delight,” Lanyon says. “To see how Brutus has evolved and morphed and become such an integral part of Ohio State University. Brutus really has become the face of the university.”