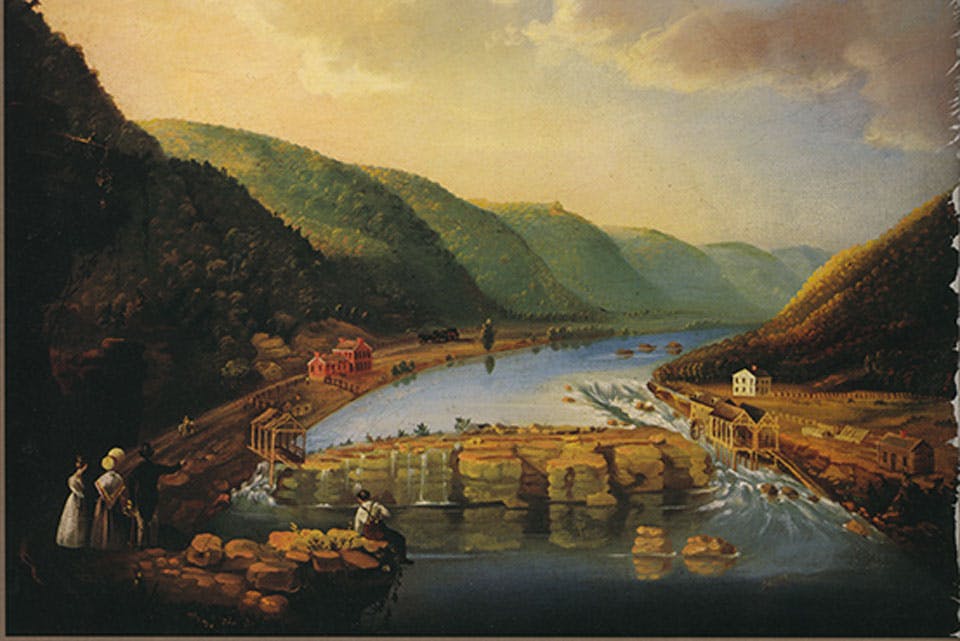 
As a librarian, Christopher Busta-Peck saw a lot of books about Ohio history. As an artist, there was a lot about them he didn’t like. The books were often long on text and short on art, and it seemed like the illustrations they did include were the same ones over and over.

So Busta-Peck started looking for etchings, watercolors and wood engravings — anything he could find that illustrated early Ohio. In the past four years, he has cataloged approximately 3,000 images and collected enough for a museum exhibition.

“Early Visions of Ohio: 1765–1865,” is on display at Lancaster’s Decorative Arts Center of Ohio through Dec. 31. The collection of oil, watercolor and gouache paintings, as well as drawings, prints, photographs, textiles and ceramics will only be displayed together during this exhibition.

“There are all these great stories to be told, and I wanted to tell them with pictures,” says Busta-Peck. “There is so much stuff out there.”

He explains that 1865 is a natural stopping point for the exhibition because Ohio and the country as a whole had changed with the Civil War, and new technologies were transforming visual arts. Photographs were becoming more common, and less-expensive printing and engraving processes made artwork more available.

The Decorative Arts Center of Ohio exhibition showcases a small portion of Busta-Peck’s index — around 110 pieces — and it includes , paintings maps and illustrations from books.

One of the exhibition’s notable works is “View of Mill at Wolf Creek Near Muskingum River” by Sala Bosworth (pictured above), a painting on loan from West Virginia’s Huntington Museum of Art.

“It’s just a beautiful piece that you can stare at for quite a while because of the detail put into [it],” says Decorative Arts Center of Ohio executive director Brian O. Hill. “I love just staring at it.”

Busta-Peck, who works for the Cleveland Public Library, has traveled throughout the state to secure pieces for the exhibition. There are many museums in Ohio, he explains, and most have some type of map or artwork relevant to local history. He cites a drawing of Fort Stephenson — located in what is now the northwest Ohio city of Fremont — that originally appeared in Port Folio magazine in 1815. The fort itself was the site of a battle during the War of 1812, a fact that is well known to Sandusky County residents but more obscure to other Ohioans.

“A lot of these pieces have never been seen outside of their local area,” Busta-Peck says. “I know there’s a ton more material out there in small collections. It’s my hope this exhibit will bring them into the public eye.”

Hill, a native of the East Coast who only recently moved to Ohio, says viewing the works has been a learning experience. “If you want to know about Ohio history, this is where you go,” he says. “And even if you think you know Ohio, you’ll want to come here.”  — Vince Guerrieri

For more information about “Early Visions of Ohio: 1765–1865,” visit decartsohio.org.