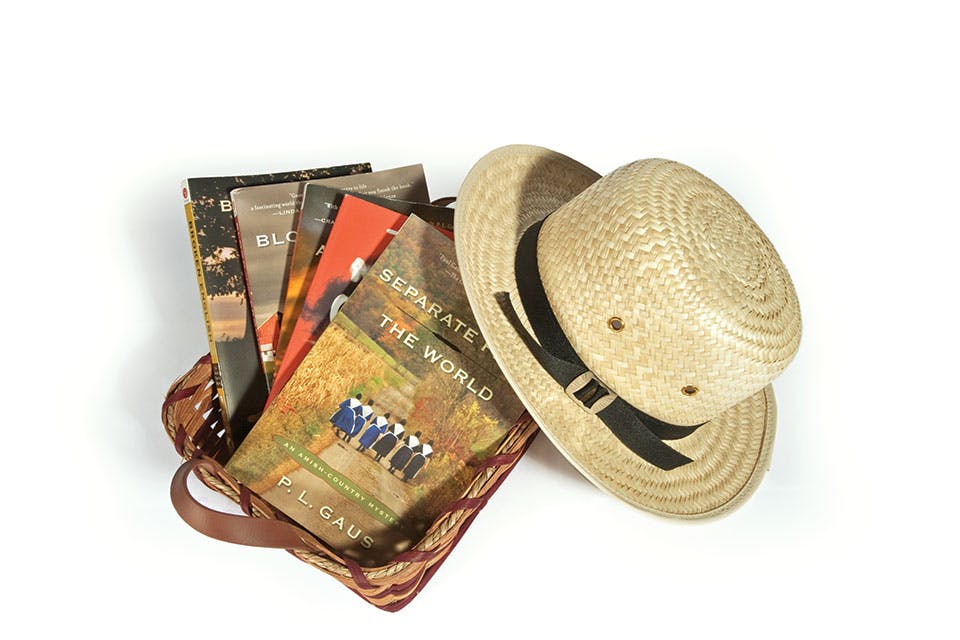 It’s easy to miss Clark Township Lane 165. Located north of the village of Baltic and east of Farmerstown, the road is little more than a clearing, bordered by bramble bushes and a rocky stream.

Which is exactly the reason P.L. Gaus chose it as the spot for his latest murder.

“Even with a map unfolded on the passenger seat of my car and a GPS locator on the dash, it still took me nearly an hour to find the place when I first visited it,” he admits.

But Gaus, 65, is no stranger to this part of northeast Ohio. For almost two decades, he’s penned mystery stories featuring crime scenes that never fail to astonish his readers. The dastardly deeds he concocts — which range from embezzlement and kidnapping to manslaughter — always originate from one of the placid Amish and Mennonite communities near the writer’s home in Wooster. Gaus’ latest book, The Names of Our Tears, revolves around a drug-smuggling ring stretching from Walnut Creek, Ohio, to Sarasota, Florida.

Needless to say, the author has gotten used to the raised eyebrows he receives when describing the content of his novels. Gaus understands the perplexity.

“The Amish and Mennonite people are often mistaken for being saintly,” he explains. “And they’re not. They’re people. They’re human. They have the emotions and difficulties everybody else has. Since they arrange their lives inside of a church community, their environment looks pretty controlled from the outside. But when you get to know them, you learn they’re just regular folk.”

A native of Athens, Paul Louis Gaus whiled away childhood summers reading Nancy Drew and Hardy Boys mysteries. After earning a Bachelor of Science degree in chemistry at Miami University and a Ph.D. in chemistry from Duke University, he spent 31 years teaching the subject at The College of Wooster. But the power of a good whodunit never lost its hold on him.

“Mystery stories unveil the human condition,” Gaus says. “Criminality is one of the places where humanity is exposed in a raw and deep way. You can tell a lot about people and their lives as the plot develops.”

In between teaching students about kinetic energy and oxidation, professor Gaus also led seminars in American culture. Reading materials for the class included fiction by Tony Hillerman, an Albuquerque, N.M., author known for his thrillers featuring Navajo police officers Jim Chee and Joe Leaphorn. A phone conversation Gaus had with Hillerman in 1995 charted a new course for the academic. “I was describing the chemistry textbooks I’d written,” Gaus recalls. “Tony laughed and said, ‘If you really want a challenge, you ought to try your hand at fiction.’ I had always loved literature, so that remark stuck pretty tight with me.”

Gaus was game. And he didn’t have to think twice about his subject: mysteries involving the Amish and Mennonite cultures he knew so well.

The author cringes when he thinks about his early attempts to put his visions on paper.

“My first drafts were terrible,” Gaus recalls. “I created stereotypes. Then, it suddenly hit me that I needed to approach my writing like I would solve a puzzle in my chem lab. I needed to face myself honestly and look at my work objectively, correcting mistakes in plotting suspense and character development. “It took me three solid years to find my voice.”

Gaus’ first offering, Blood of the Prodigal, was published in 1999; the ninth, Whiskers of the Lion, will be released later this year. To his legion of fans, Gaus’ trio of protagonists — college professor Michael Branden, sheriff Bruce Robertson and Amish pastor Caleb Troyer — have become as familiar as old friends.

“From the outset, I knew these three guys, who had been pals for most of their lives, would stick together and solve mysteries,” Gaus explains. “I knew I needed a thinker, so I decided on a college professor, a profession I know a lot about. I wanted the sheriff to be a gruff and impulsive man of sizeable bulk who has his heart in the right place but sometimes pushes forward too brashly and leaves his two friends to level him out. And Cal Troyer serves as the emissary between law enforcement and the Amish community.”

Gaus is also an ambassador of sorts, crisscrossing Holmes County to plot his next novel. Retired from teaching, he spends many afternoons sitting on one of the benches flanking Courthouse Square in Millersburg, notepad in hand, waiting for someone to stop by and strike up a conversation. He also enjoys taking to the open road to snap photos of farms and fields that never fail to serve as inspiration.

“My goal is to write purposefully in order to illuminate Amish and Mennonite cultures for my readers,” Gaus says. “Since the topics are practically endless, I’ll never run out of things to write about.”