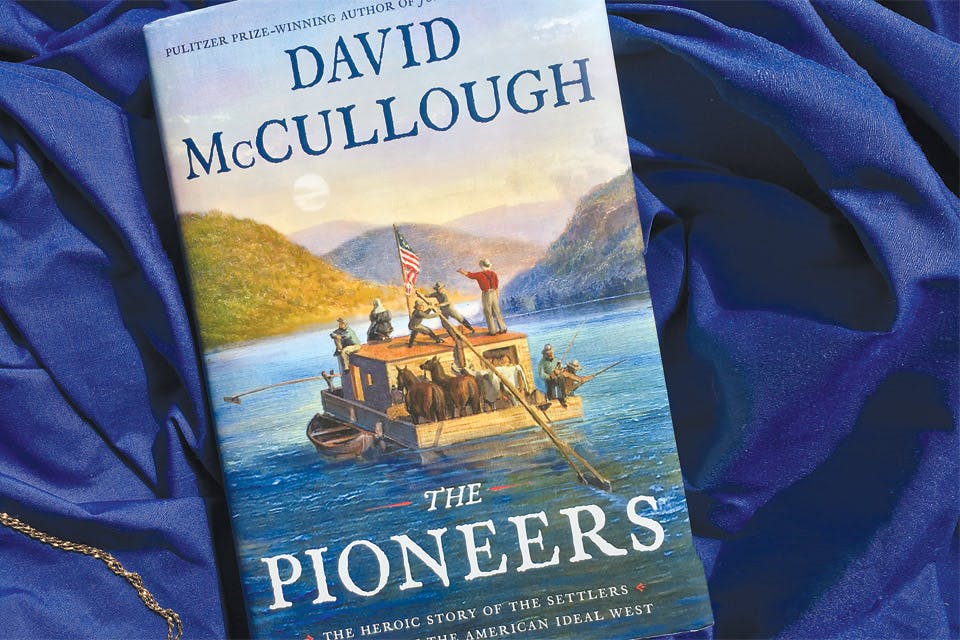 Author David McCullough on ‘The Pioneers’

The Pulitzer Prize-winning historian’s new book examines the lives of those who settled Marietta, the United States’ first permanent settlement in the Northwest Territory.

David McCullough is known for his comprehensive biographies of John Adams, Harry S. Truman and Orville and Wilbur Wright. But the Pulitzer Prize-winning historian never imagined a chance encounter with a clergyman who lived in the 18th century would lead to his new book about southeast Ohio.

In 2004, as McCullough was preparing to deliver the commencement address at Ohio University, he decided to add a bit of campus history to his speech. When the celebrated author learned the university’s oldest building was called Cutler Hall, he was curious about the name. It didn’t take long for McCullough to be swept up in the story of one of Ohio University’s founding fathers: A Massachusetts minister, Manasseh Cutler was instrumental in persuading Congress to pass the Northwest Ordinance that opened the vast wilderness containing Ohio to Revolutionary War veterans and their families. The ordinance included a stipulation that there would be absolute freedom of religion and free universal education, and that slavery would be forbidden.

“My first thought was, Whoa,” McCullough says. “I had never heard of Manasseh Cutler, which made me even more interested. Once I found out what he’d done and began reading about the people who went out and settled the land, I kept going back to my great hero [playwright and novelist] Thornton Wilder. I always thought it would be wonderful to write a book like Our Town — Wilder’s great masterpiece about an American small town — but I would write about real people instead. Everything they would say and do would be based on what they really said and did. Rather than have an historic celebrity get readers into the tent, I wanted to write about people most of us had never heard of. I was convinced if I could find such a story I could make it work. And there it was in Ohio.” 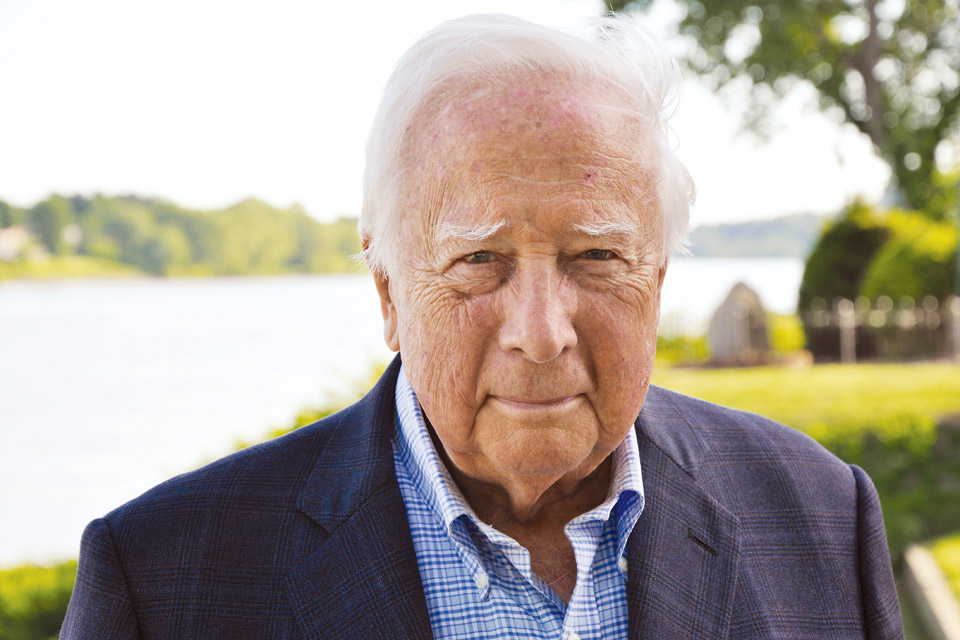 Published this month by Simon & Schuster, The Pioneers describes the settlement of Marietta, beginning with the early explorers who set out from New England during the winter of 1787–1788. The book concludes in 1863, when Ohio became a key stop on the Underground Railroad. McCullough chronicles this pivotal period in history through the eyes of five men instrumental in Marietta’s founding and evolution: Manasseh Cutler; his son Ephraim who, although weak from illness, rose from his bed to cast the deciding vote against slavery at the 1802 Ohio state constitutional convention; Revolutionary War general Rufus Putnam; Joseph Barker, a skilled carpenter and prominent architect; and Samuel Hildreth, a physician who became a leading scientist in the study of early Ohio history, botany and geology.

“Researching and writing this book has been one of the most thrilling moments of my working life,” McCullough says. “It was uplifting to the extreme.”

We talked with the 85-year-old author about the hardships early Ohioans faced and the lessons we can learn from them.

In 2015, your book The Wright Brothers reacquainted readers with the Dayton siblings who conceived of and built the world’s first airplane. Did you ever imagine you would revisit Ohio for further study?
No, I didn’t. The big break was to discover the rich sources available at Marietta College and the chance to work with [the college’s] collection of letters and diaries such as to be found rarely from anyone, let alone people who accomplished all they did through determination, worthy purpose and belief in the old fundamentals of the American Dream. I particularly feel right now in these times we need to be reminded of the examples of courage, faith and American ideals these early people exhibited. So often, history is considered nothing but a lot of dates and statistics and locations you have to memorize. But history is human, and the people in The Pioneers were extremely human, as they revealed again and again in their marvelous outpourings.

When we hear the word “pioneer,” we usually think of those who headed for the Great Plains in covered wagons. Do you think the pioneers you wrote about have been largely neglected in the history of our country?
Absolutely, they’ve been neglected, and it’s hard to say why. I think because the movement was so powerful to keep going farther and farther west, that’s where the stories seemed to go. But I don’t think there’s anything more important than community and the ideas and values these people brought to Ohio. They weren’t Daniel Boone, stalking off into the wilds of the forest with a long rifle, wearing a coonskin cap. They were families — men, women and children of all ages who had to work extremely hard just to survive.

How did you go about choosing which members of the pioneers to feature?
I decided by getting to know them, and that’s really what it’s all about. I often feel I don’t choose my subjects, they choose me. I grew up with the old saying: What have you done in the course of a day that’s made our town, neighborhood or country better than it was before the day began? The people I write about brought a sense of purpose to their lives.

Is there one member of the team you admire the most?
Ephraim Cutler. He put up with such a great variety of adversity and stopped slavery from being introduced. He also did more than anybody to create institutions of higher learning, and he never got too full of himself.

You describe Mary Owen, a nurse who was the first female settler, and a Mrs. Meeks, who seized an ax and struck a Native American following an attack in which her husband was shot dead and her children were killed with tomahawks. Was it difficult to find documentation about heroic achievements accomplished by women?
My biggest regret is that we were never able to find comparable sets of letters and diaries for the women involved as we did for the men. We have some, but many women — as one expressed in a letter to her parents in the East — were brought up not to complain. And so they don’t write home to say [this experience] is the hardest thing I’ve ever been through in my life, or I am confronting adversities of a kind I could never ever possibly have expected. And oh my goodness, what they had to do: They made their own clothing; tended to the sick, including people dear to them who were suffering in pain with no anesthetics available … and on and on. When you think of the epidemic diseases they faced — influenza, smallpox, measles — and the children who died. Even before they got to Marietta, two of Ephraim and Leah Cutler’s children died as the family traveled down the Ohio River. Imagine having to bury your children on the side of a river in what looked like an impenetrable wilderness.

You’ve written about eminent statesmen and inventors. Do you face a different set of challenges when writing about folks who are not famous?
Oh, absolutely. I think you have to hook the reader. You have to get the reader to care about these characters — not because they’re famous or important but because they will get to know them — just as you get to know people when you go to school or go off on a trip — and want to be with them. I know more about [the people I write about] than I know about many I see every day, because in real life you don’t get to read other people’s mail or ever-so-private diaries where they pour out worries, disappointments and their sense of guilt or defeat. I think one of the proudest achievements in my work is that I’ve been able to bring front and center stage into the lights people who have long deserved to be there.

Where did your research take you?
Although I visited the Library of Congress and the Yale University Library, the main body of my research was conducted at the [Legacy Library] at Marietta College with the help of special collections associate Linda Showalter. I didn’t have to travel to far-away attics to find what I needed. The library and the material is right there where the story happened.

What were the greatest treasures you uncovered in your research?
The combined papers of father and son Manasseh and Ephraim Cutler were gold mines. Since I love to paint and draw, finding the exquisite watercolors by the physician Samuel Hildreth, whom I consider a fellow spirit, was extremely exciting. And, boy, was he good! His watercolors of the maturation of a butterfly are so exquisite they would be right at home hanging at the Metropolitan Museum in New York. Since Hildreth also wrote the first histories of Marietta and knew the townspeople, he was able to interview them. That I couldn’t do.

While in Marietta, did you visit any of the historic sites in southeast Ohio, and which did you find the most fascinating?
One of the lessons in life, which I remember every time I’m writing a book, is that almost nothing of importance or value is ever accomplished alone — it is a joint effort. I am indebted to the good people who take care of historic artifacts and willingly share their knowledge with you. The Mound Cemetery is a treasure to say the least. And Campus Martius Museum is marvelous. When you visit and see the giant wheels on the covered wagons, you can’t help but marvel how the pioneers got those across the Allegheny Mountains and how, when the snow was so bad, they had to remove the wheels and drag them along on a sledge.

What can we learn from the men and women who settled Marietta?
High purpose in the face of adversity is one of the lessons I hope comes through in this book, as well as the importance of work and persistence and determination. Compared to those people of that generation and that settlement, we are all a bunch of softies.