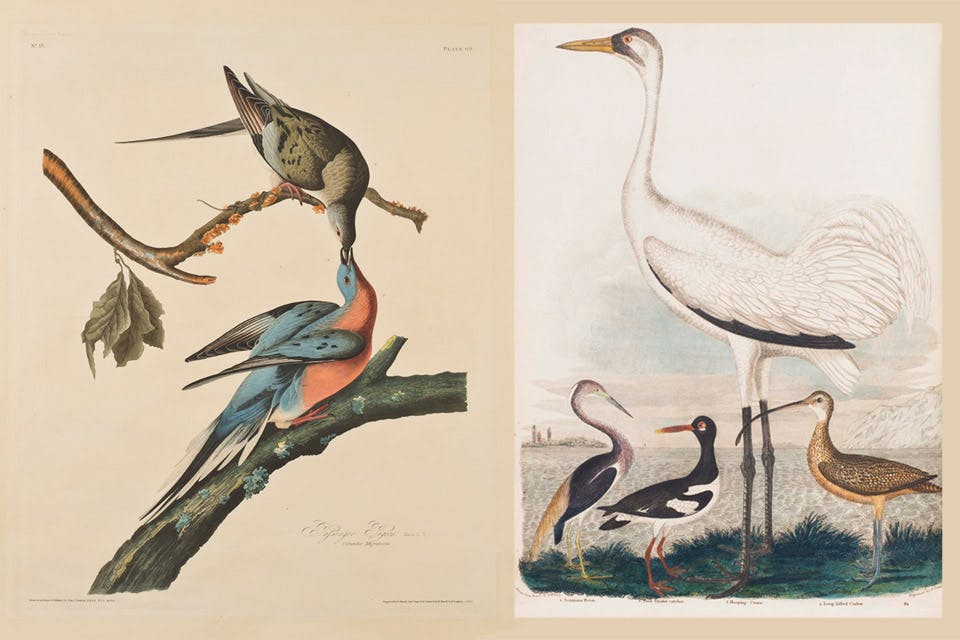 Before John James Audubon, there was Alexander Wilson. The Toledo Museum of Art showcases its complete set of his nine-volume masterpiece in a new exhibition.

Alexander Wilson’s descriptions of the American birds he studied flow with an eloquence not often found in scientific guidebooks. Take his description of the blue jay, for example, which jumps from the page with a poetic cadence.

“In the charming season of spring, when every thicket pours forth harmony, the part performed by the Jay always catches the ear,” Wilson writes. “He appears to be among his fellow-musicians what the trumpeter is in a band.”

Wilson’s incredibly detailed description of the blue jay covers the bird’s exact markings and colors, its nesting habits, its natural enemy in the owl and even insight into the beautiful bird’s darker nature.

“… the Blue Jay himself is not guiltless … and becomes in turn the very tyrant he detested,” Wilson continues, “when he sneaks through the woods, as he frequently does, and among the thickets and hedge-rows, plundering every nest he can find of its eggs … and spreading alarm and sorrow around him.”

In 1808, the Scottish-born poet, educator and amateur naturalist began publishing his multivolume American Ornithology; or The Natural History of the Birds of the United States. Although Wilson was not an artist, he taught himself how to draw so he could illustrate his nine volumes with a total of 76 hand-colored engraved and etched plates depicting 314 species. They are accompanied by richly detailed descriptions built from untold hours of observation. Twenty-six of the birds Wilson included had never been described before.

The Toledo Museum of Art owns a complete set of Wilson’s series. Fewer than 450 were made and even fewer intact copies remain today. Over the years, some were dissected for their vibrant, hand-colored illustrations.

“Before Audubon: Alexander Wilson’s Birds of the United States,” which runs through July 22, opened at the Toledo Museum of Art on April 21 as a lead-in to this month’s Biggest Week in American Birding. The annual May event draws thousands of birders to northwest Ohio during the height of migration. 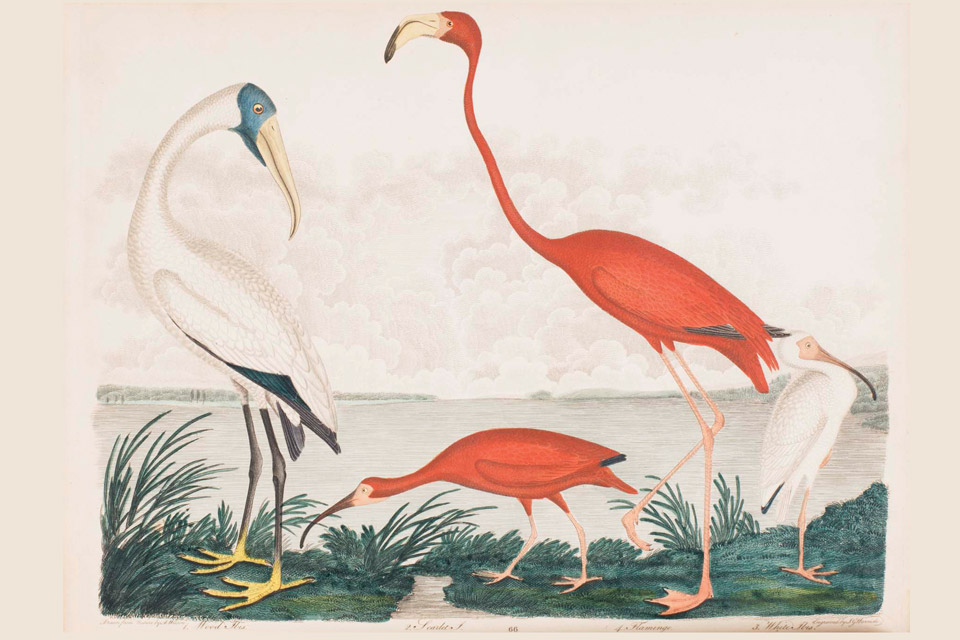 Audubon is the name most people associate with beautiful bird illustrations, but Wilson was the first to create such a comprehensive collection, inspiring the younger Audubon before ultimately becoming his rival.

Born in Scotland in 1766, Wilson apprenticed as a weaver in his home country, but was jailed for blackmail after admitting he penned a satirical piece of poetry about a local mill owner. (He did not admit to sending it to the man, along with the offer to destroy the poem for a fee.) After his release, Wilson immigrated to the United States and settled outside of Philadelphia where he worked as a teacher.

“He was a poet primarily,” says exhibition curator Paula Reich, the Toledo Museum of Art’s head of interpretive projects and managing editor. “He was kicking around trying to figure out exactly what path he wanted to take and, just by serendipity, happened to be a neighbor for a while to William Bartram, who was the premier naturalist in the United States at the time.”

That friendship with Bartram, a fellow writer and artist who had done extensive travel and documentation throughout the American south, fueled Wilson’s interest in documenting the birds he saw in eastern Pennsylvania.

“He was really one of the first naturalists to spend time observing birds in the wild and figuring out their behaviors and the food they ate,” Reich explains. “That’s what all the descriptions are, and then he taught himself how to draw.”

Pennsylvania couldn’t contain Wilson’s curiosity and he began traveling, ultimately covering the breadth of the United States, which stretched as far as Louisiana at the time. He often had to shoot birds so he could have a specimen to study closely and dissected some to gain additional insight. 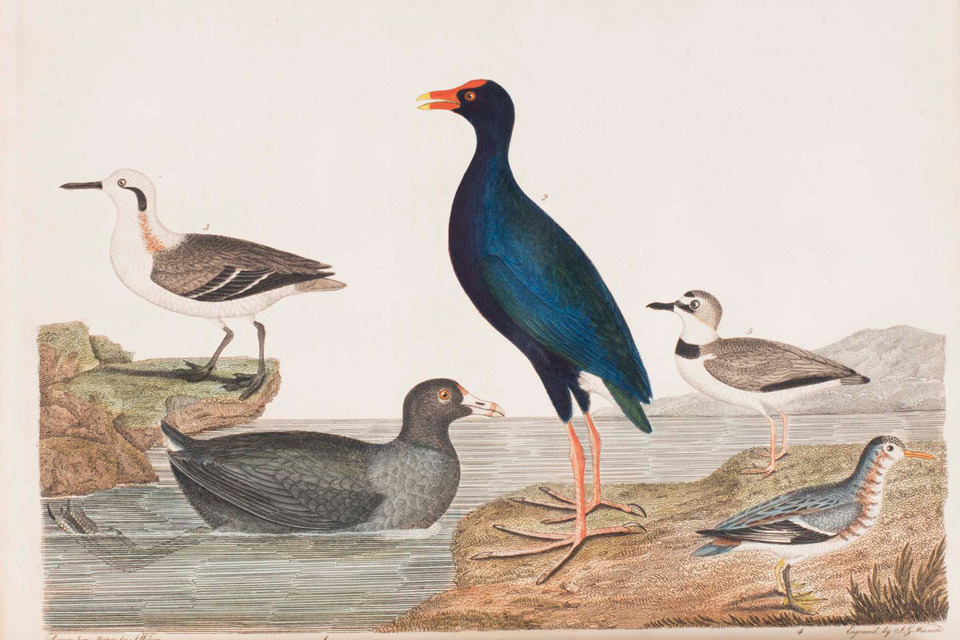 During his travels, Wilson also sold subscriptions to his book series in order to finance the project. President Thomas Jefferson, an avid birder and naturalist in his own right, was a customer. When Wilson hand delivered the first volume to the White House unannounced, he was welcomed in to meet with the president.

“He brought him the book, and they spent the afternoon talking about birds,” says Reich.

That initial volume of American Ornithology; or The Natural History of the Birds of the United States appeared in 1808, and the ninth was published in 1814 — a year after Wilson died at age 47. The project had been an obsession for Wilson, but he faced difficulty in the years prior to his death completing his initial plan for 10 volumes.

“On the last couple of volumes, Wilson was running out of money,” Reich explains. “He was practically living in poverty to try to finish this project. He couldn’t afford to hire an engraver, so he taught himself how to do it.”

Wilson’s illustration style is not as polished as Audubon, but his attention to detail, from feather patterns and colors to his rich and poetic descriptions of the birds’ diets and traits, makes his collection a treasure on its own.

Audubon and Wilson met once in Louisville, Kentucky, with Wilson showing Audubon his work. The younger man nearly subscribed until a business partner convinced him that his illustrations of birds were better.

Strangely, a rivalry between the two men arose only after Wilson’s death, with Audubon claiming the elder artist had plagiarized his work. Those allegations led to backlash from Wilson supporters in Philadelphia, the U.S. capital of book printing at the time, and forced Audubon to go to London to get his Birds of America published.

For Wilson, his pursuit was not just a matter of science, but also one of patriotism, Reich explains, adding that there was an opinion at the time in Europe that the birds of America were devolved versions of European species.

“He thought that was ridiculous on its face,” Reich says. “There were so many beautiful and colorful birds that you don’t see in Europe. He really wanted to make this study and show these unique birds specific to the Americas … to create this unifying idea: Here are these beautiful birds that belong to America … and it’s something we can all be patriotic about.”