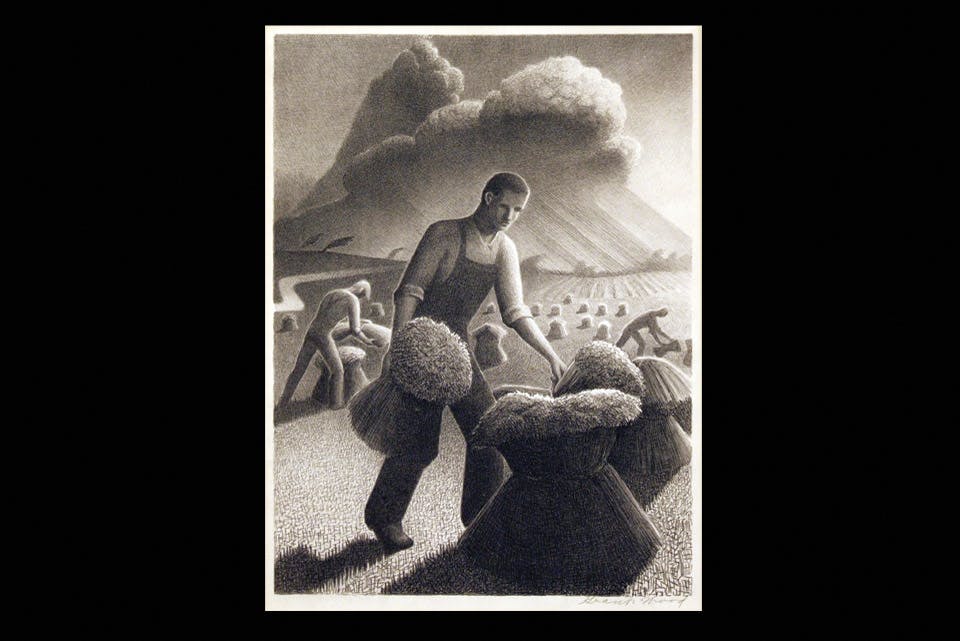 At the height of the Great Depression, artists banded together to offer hope through their work.

Farmers tending crops. Women taking a lunch break. A child tutored by a wizened elder. At first glance, the lithographs, etchings and aquatints featured in the Springfield Museum of Art’s new exhibition seem to be scenes totally unrelated to one another. But Ann Fortescue, the museum’s executive director, proffers a different perspective.

“These are snapshots of the American experience sandwiched within a specific time frame when the United States was in desperate need of hope and optimism,” she explains.

From March 15 through May 10, the Springfield Museum of Art will showcase 70 images from its permanent collection that were created between 1933 and 1950 by members of the Associated American Artists consortium. Founded 81 years ago, the organization’s mission was to make art accessible — and affordable — to the general public, despite the hardships that enveloped the country following the onset of the Great Depression and World War II.

“Needless to say, purchasing art was not a top priority during those years,” explains Erika Doss, professor of American Studies at the University of Notre Dame and author of Twentieth-Century American Art. “Once the stock market crashed in 1929, so did the art market. But that didn’t mean people weren’t interested in art.”

Reeves Lewenthal certainly was one of them. In the early 1930s, the New York-based press agent represented more than two dozen arts groups, including the National Academy of Design, the Beaux Arts Institute and the Society of American Etchers. But as he watched public funding for the arts dry up and private patronage disappear, Lewenthal realized that in order for the arts community to survive, change was imperative.

“The [art] gallery system [was] doomed,” he told Doss during a 1981 interview. “The rich collector class [was] dying out. There [was] no use in galleries sitting around and complaining and waiting for the few old collectors who [were left] to come in and buy an occasional picture.”

So, Lewenthal devised a plan that would guarantee artists’ employment and relevancy. In July 1934, he arranged meetings with Grant Wood, John Steuart Curry, Thomas Hart Benton, Clarence Holbrook Carter, Isabel Bishop, Peggy Bacon and more than three dozen others. His proposition: Each artist would produce prints that Lewenthal would market for $5 each (plus $2 for the frame) to middle-class consumers. In exchange, participants would be paid $200 for each series of work completed.

“Up until that time, art had always been a commodity of the rich and all about rich people’s tastes,” Doss says. “Lewenthal’s approach came at a time when artists of the day were attempting to make art for a bigger audience.” 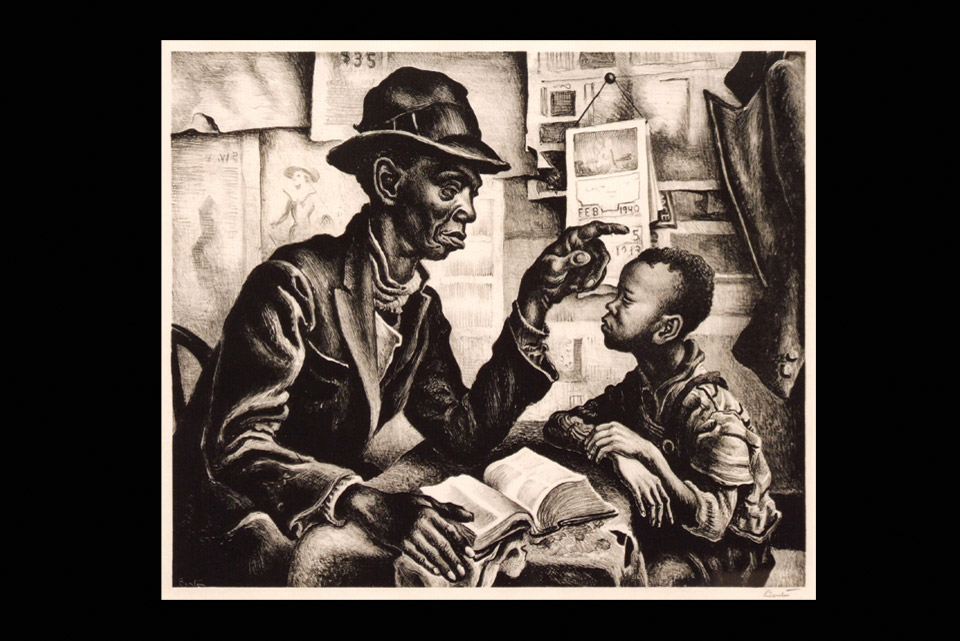 Thomas Hart Benton’s “Instruction” illustrates how many of the pieces produced during this period reflected connections between people. (artwork courtesy of Springfield Museum of Art)


By autumn of 1934, the shrewd businessman had contracted with more than 50 department stores around the country to carry the art.

To capitalize on the prints’ burgeoning popularity, Lewenthal also began selling them by direct mail. To catch the attention of potential buyers, he advertised in newspapers and magazines that targeted not only mass audiences but art enthusiasts as well. For 10 cents in stamps, consumers received a brochure listing “40 original etchings by 36 distinguished American artists.”

After selections were made and payments received, each order was processed. Associated American Artists coordinated the entire effort, from production to marketing to distribution. Lithographs and etchings were produced in limited editions ranging from 125 to 250 impressions, personally hand-signed by the artist. Between 1934 and 1945, the organization published a little more than 600 different prints.

“Sears, Roebuck had perfected the idea of catalog shopping by the end of the 19th century,” Doss says, adding that Lewenthal borrowed the idea. “As one article about the AAA stated, ‘Now nobody was too poor to buy a masterpiece.’ ”

Although the images border on stark, they were irresistibly stunning to a public hungering for positive emotional and economic reinforcement.

“You’ll notice that in many of these prints, people are working or playing,” Doss says. “In other words, they are doing things. One of the aspects of the Great Depression — and the depression people experienced because of it — is that they were frozen, perhaps to the point that they couldn’t get out of bed in the morning. One of the things that’s so significant about this art is how much motion and energy is included in the prints, especially those that depict people.

“There are very few showing folks sitting dejectedly on a park bench reading a newspaper. Instead, the artists portray Americans farming, dancing, working, meeting. It’s easy to see why these prints were considered to be socially and psychologically therapeutic. Their message is clear: Do not give in completely to depression. Life is going to turn around.”

Regionalists Grant Wood and Thomas Hart Benton are indelibly associated with producing insights into the American heartland. Their renderings of farms and fields where owners are hard at work are captured in Wood’s “March” and “Approaching Storm” and Benton’s ode to an “Arkansas Evening.”

Conversely, Isabel Bishop’s prints are celebrated for their urban subject matter. The Cincinnati native was particularly fond of depicting women taking a breather from their 9-to-5 office jobs in Manhattan skyscrapers.

“She didn’t make them appear to be heroic. They weren’t Wonder Woman,” Doss explains. “Instead, Bishop pictured them at lunch or chatting, as ‘Noon Hour’ illustrates.”

Whimsy was the hallmark of Peggy Bacon’s work. The illustrator, caricaturist and etcher became famous for her astute and caustic observations of the New York art world. The example showcased in the Springfield museum show is “Antique Shop,” Bacon’s 1943 lithograph depicting a store owner whose countenance implies that he is not in the mood to haggle while awaiting a customer’s decision.

Following World War II, Associated American Artists sought new ways to sell art. The enterprise opened galleries around the country and added inventory that included porcelain, fabric and housewares. But, says Fortescue, it’s the images that buoyed Americans when they needed it most that the organization is known for.

“Just as great diarists like John Adams and Anne Frank were wonderful in recording their observations and their thoughts during critical periods in human history, the artists who formed Associated American Artists did that same kind of work in their own media.”