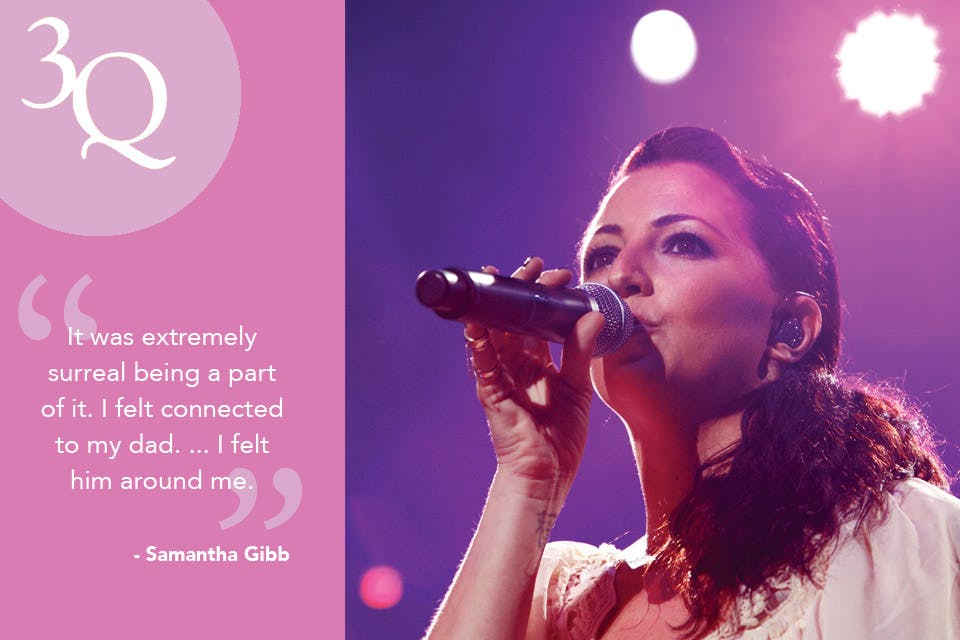 The singer-songwriter and Centerburg resident shares the story behind the new Bee Gees tribute album honoring her father and uncles.

To Samantha Gibb, her father Maurice was “very much my goofy dad.” To the rest of the world, Maurice and his brothers Barry and Robin were the Bee Gees, Rock & Roll Hall of Famers whose lengthy and successful careers reached incredible heights in 1978 when the multiplatinum soundtrack to “Saturday Night Fever” spent a staggering six months atop the charts.

Samantha Gibb saw the Bee Gees in concert for the first time at age 11, during the group’s tour for its 1989 album “One.”

“I was like wow … whoa,” recalls Gibb, who today lives in Centerburg. “It definitely made me realize they were a very strong entity. They were legends in what they did.”

After living in California and Florida, Gibb, her husband and son relocated to the slower-paced life of central Ohio three years ago.

“We live across the street from a cornfield,” she says. “It’s nice not to have to spend an hour in traffic to meet someone who lives down the street.”

Gibb has teamed with fellow family members to form The Gibb Collective and record the newly released tribute album “Please Don’t Turn Out the Lights.” It features Bee Gees songs recorded by some of the children and a younger sister of Barry, Robin, Maurice and Andy. We talked with Samantha about the album, family and touring with her uncle.

The new album comes during the 50th anniversary of the Bee Gees. Was that planned?
It’s pretty ironic, but we had no idea about the anniversary. We had talked for years about trying to put together a tribute. We started this at the beginning of last year and everyone responded within no time. It’s material you can’t go wrong with and everyone added their own unique flavor. I did “New York Mining Disaster 1941.” There’s a kind of hollowness in it that I love.

How have you dealt with losing your father and uncles Robin and Andy?
The loss is never easy. You can either grow from it or let it tear you apart. They were all incredible people, and that’s what we keep with us. The [music] business can definitely get to you, but my dad was very much my dad. … He didn’t bring his work home with him. He was very present.

You toured with your uncle Barry four years ago. What was that like?
It was extremely surreal being a part of it. I felt connected to my dad. … I felt him around me. I got to see [performing] through his eyes. I felt energy, not sadness. I thought that tour was good for me. It was a healing process for my uncle and I.

For more information about “Please Don’t Turn Out the Lights,” visit gibbcollective.com.