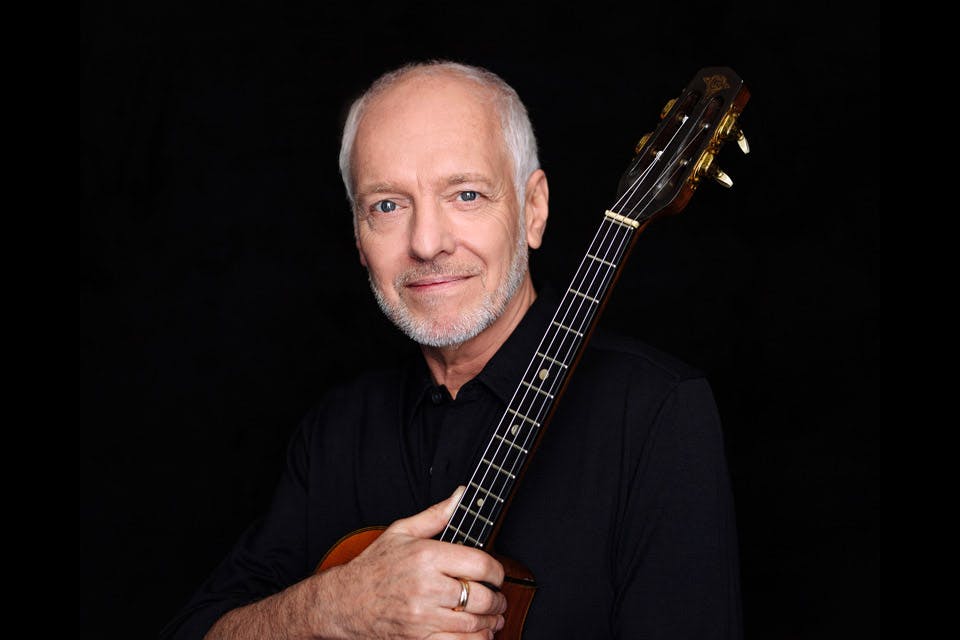 More than 40 years after the classic album that made him a rock star, the musician talks about his time living in Cincinnati and going acoustic on his new tour.

For nearly 14 years, an icon of 1970s rock ’n’ roll lived quietly in the Cincinnati suburb of Indian Hill, enjoying a domestic life far removed from his wild days of touring when he filled stadiums across the United States for electric live performances.

“I was always on the road before we moved to Cincinnati for the family,” says Peter Frampton, who married Queen City native Tina Elfers in 1996. “Home is where the family is, and I just sort of fit in. I still have some of my best friends there.”

Now divorced, the 66-year-old Frampton makes his home in Nashville. “The musicianship here is of a very high caliber,” he says. “If you get stuck finishing a song at 2 a.m., you can find exactly who you need in Nashville.”

Touring in support of his 2016 album “Acoustic Classics” with shows at New Albany’s Jeanne B. McCoy Community Center for the Arts on March 24 and at Cleveland’s Ohio Theatre on April 4, Frampton talks with us about his memories of Cincinnati, the side effects of dizzying success and going unplugged.

Your 1976 classic album “Frampton Comes Alive” made you an overnight sensation and has sold more than 6 million copies. How did you handle fame and fortune?
With great difficulty — I was 26 and my brain hadn’t finished growing yet. A certain level of success was exciting at first, but by the end of 1976 it was, oh my God, what am I going to do next? I’ve got to compete with myself. On the next record there was an incredible amount of pressure, and I felt I’d lost before I started.

What are your fondest memories of Cincinnati?
I’ve said it before and I’ll say it again: There’s noting better than a scoop of Graeter’s [ice cream]. … Working with the Cincinnati Ballet [in 2013] was one of the most enjoyable things I’ve ever done. When people did notice me [in public] they were very respectful, but when one of your songs comes on the Muzak at the grocery store you try to find the least-occupied aisle.

How different is it for you to play acoustic versions of songs that you’ve been associated with for so long?
Music is a relationship stamp. We all have songs that take us back to a certain place and time. I’ve gone back and reverse engineered the songs and made them as bare as can be. They’re very soulful, emotional renditions that pull you in as an audience member. It’s 180 degrees from the band tours we do in the summer.