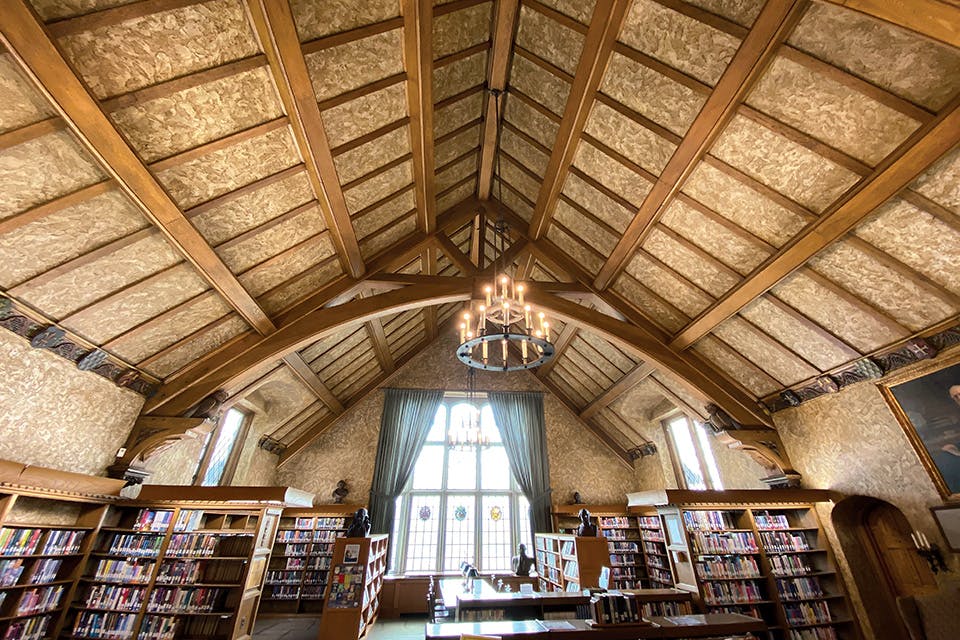 In 1923, concert pianist Mabel Wagnalls funded the construction of this library in honor of her parents.

The stained-glass windows, heraldic shields and exposed wood beams inside The Wagnalls Memorial Library in Lithopolis look as though they were crafted for a castle in the Middle Ages. But this central Ohio structure’s origins only date back to the last century.

Concert pianist Mabel Wagnalls Jones had the library built in 1923 to honor her parents, Adam Wagnalls — co-founder of publishing giant Funk & Wagnalls — and Anna Willis, who were born in Lithopolis. Dedicated in 1925, the library cost $500,000.

“[Mabel’s] friends in New York thought she had lost her mind,” says Carol Gaal, the library’s historian. “There were only 300 people living here, so they didn’t understand what [residents] would do with it.”

Jones hired Ohio architect Ray Sims to oversee the project. He hired a local workforce and used stone from the town’s quarry.

“Lithopolis is Greek for ‘city of stone,’ ” Gaal explains. “Mabel came back here, bought the [shuttered] stone quarry and hired everybody back.”

Nearly a century later, The Wagnalls Memorial Library and Community Center continues to serve the town, which now has 1,688 residents. In addition to 66,000 volumes, the library’s collection includes two original Norman Rockwell paintings — “Smiles in Belgium Once More” and “Woman Pinning Boutonniere on Man” — that are displayed at the entrance. The library’s collection also includes letters written to Jones by a close friend, magician Harry Houdini.

The library stages community theater productions on-site, and over the years, the beautiful property has become a popular venue for weddings, baby showers and birthday parties.

In 2016, the acre of property adjoining the library was transformed into a garden featuring rock sculptures created by Edward Roller, a beloved local physician. Roller’s creations include a pavilion birdhouse and lighthouse. Funded with a $25,000 grant from Lithopolis American Legion Post 677, the Walker-Hecox-Hickle Gardens (named in honor of the post) has become a popular spot for events. The manicured shrubbery and stone pathways give the space the feel of a classic English garden and plantings change with the seasons.

“It’s a great place to bring your family to go exploring,” says Pam Jarvis, one of the many master gardeners who volunteer their time in the library’s garden. “It’s small, but there is a lot to see.”