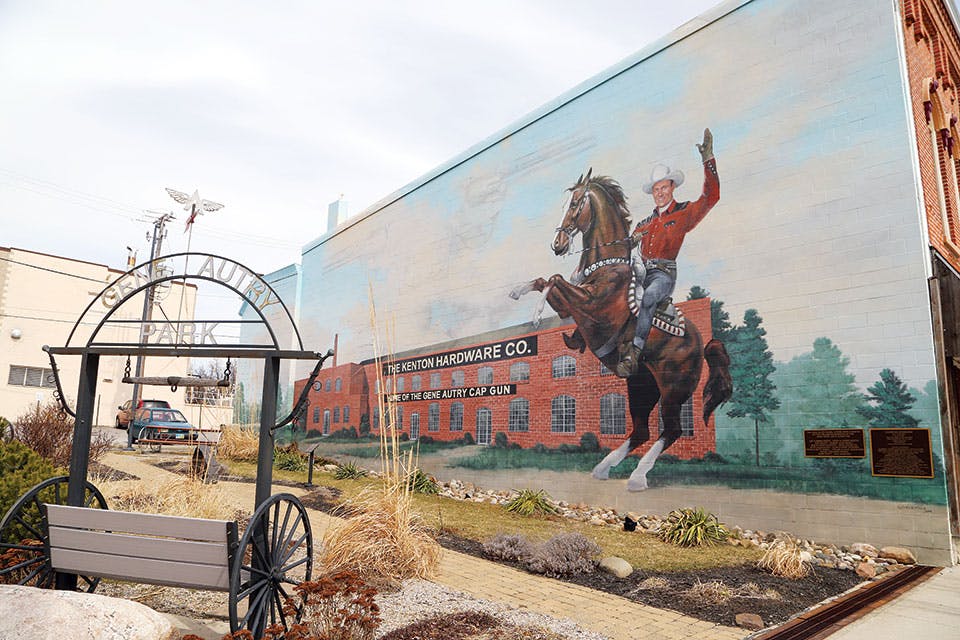 In 2004, artist Keith Hasenbalg created this work that pays tribute to Gene Autry’s ties to the town.

There’s no rodeo in Kenton, Ohio. There is no dusty desert just beyond the downtown, no tumbleweeds or sun-drenched mine shafts. But there is a cowboy — just one — and he’s larger than life.

Gene Autry, better known to some as the Singing Cowboy, sits atop his famed horse, Champion, offering a wave and smile from a mural that covers the entirety of a 30-by-80-foot brick wall. Autry, who made his fame as a singer and actor, has a bit of a reputation in town.

“He appeared onstage at the theater here,” explains Rose Zuchetto, who was involved with the local committee that planned the mural.

Autry was also tangentially responsible for keeping the town afloat during the Great Depression. A toy cap gun named after him — the Gene Autry Repeating Cap Pistol — was made at the Kenton Hardware Co., the town’s now-defunct toy factory.

“It was the economy booster that helped Hardin County and the Kenton area grow, and provided jobs,” Zuchetto explains.

In fact, Autry’s influence was so appreciated that members of the chamber of commerce formulated the idea of hosting a Gene Autry festival in 1994. It was that annual festival that led to the creation of a more permanent tribute.

“They wanted to make sure the cap guns were involved, and the toy company was involved, and Gene Autry was involved. So, I just put it together,” says Keith Hasenbalg, the artist who designed and painted the mural. The committee held raffles to raise money for the project, and Hasenbalg was able to complete the project in time for the 2004 festival. “It actually took me 15 days to paint,” he recalls. “I got it done pretty quick.”

Today, a tiny park abuts the mural, and a bench decked out with wagon wheels faces Autry and Champion. Although Autry’s performances in town were before Hasenbalg’s time, he’s well aware of the performer’s place in pop culture.

“I’m old enough to know that he was the Singing Cowboy,” Hasenbalg says.