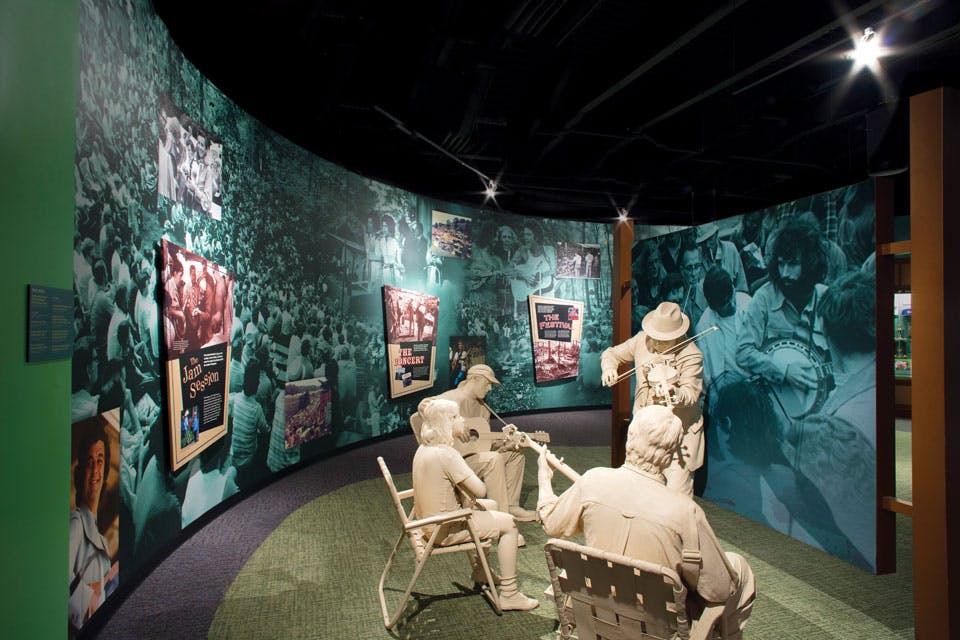 From music to contemporary art, a drive through the Bluegrass State reveals a variety of destinations that celebrate artists and embrace history.

Nashville may be the Music City, but Kentucky is the birthplace of bluegrass, and the trailblazers and champions of the musical genre are forever at home in Owensboro’s Bluegrass Music Hall of Fame and Museum.

In one gallery, faces of pivotal characters in bluegrass history line the wall. In others, visitors find a library of video oral histories, clothing and instruments that played iconic roles in the evolution of the art form.

“We have Uncle Pen’s fiddle,” says executive director Chris Joslin, referring to the uncle of bluegrass pioneer Bill Monroe. “One could say that is the source of bluegrass music. That’s the instrument that probably most influenced and shaped Bill Monroe’s creativity and his thinking.”

Proud as he is of the museum’s collection, Joslin is most excited about the organization’s mission to engage with people and share the story of bluegrass.

“We do a lot of educational programming,” he says, “whether it’s Bluegrass in the Schools with students or whether it’s more adult learners, helping them to understand the history of the music but also learning to play an instrument.”

“The music we focus on is something that’s uniquely Kentucky, something that’s really tied to our heritage, to our roots,” Joslin says. “We feel like we can live that out really authentically, and I think that’s a different level of engagement for folks.” 311 W. Second St., Owensboro, Kentucky 42301, 270/926-7891, bluegrasshall.org 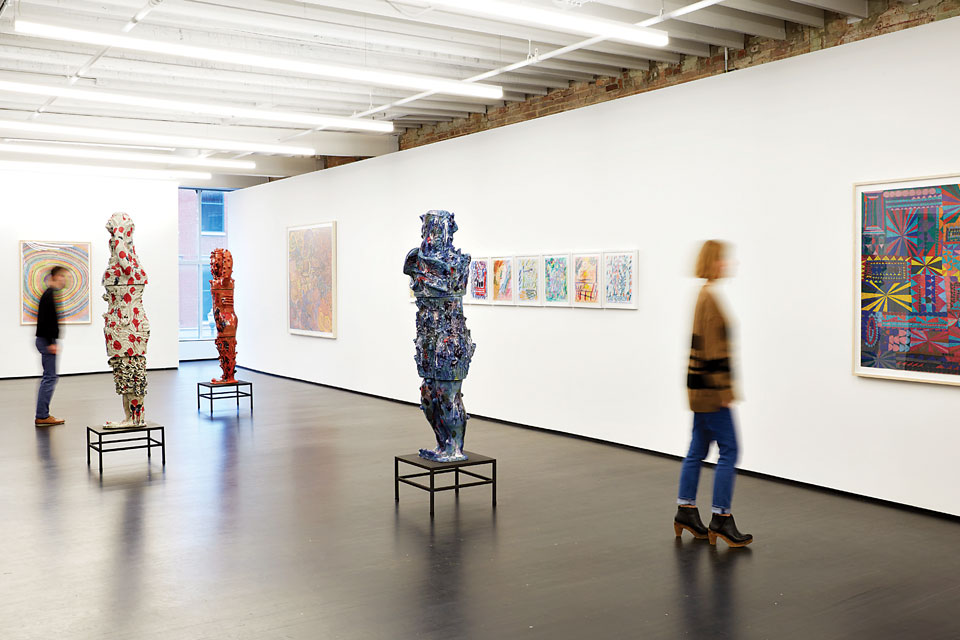 In 1981, four women launched the Art and Craft Foundation in a basement space on Louisville’s Main Street, with the purpose of showing and selling work from regional makers. Nearly four decades later, the organization has evolved (and moved up to street level) as the KMAC Museum, a destination for contemporary art.

“There have been all these debates over the past 40 years about what ‘craft’ even means,” says Joey Yates, the museum’s curator. “A lot of artists feel like it relegates them to a certain status, and so I think some museums have kind of moved away from the word.

“We’re constantly looking at this intersection … the way that folk art and contemporary art are constantly in dialogue with one another,” Yates adds. “[Artist] Simone Leigh’s whole process is evolving, taking African customs — mainly female craft work —and bringing it into her contemporary art practice. We feel like that’s what we do: contemporize craft-making.”

And while the KMAC Museum features work from artists across the nation, its heart is in Kentucky. Programming includes workshops for kids and adults, a mobile museum, parties and yoga in the galleries. In 2019, Yates debuted a triennial exhibition that will always feature homegrown artists. 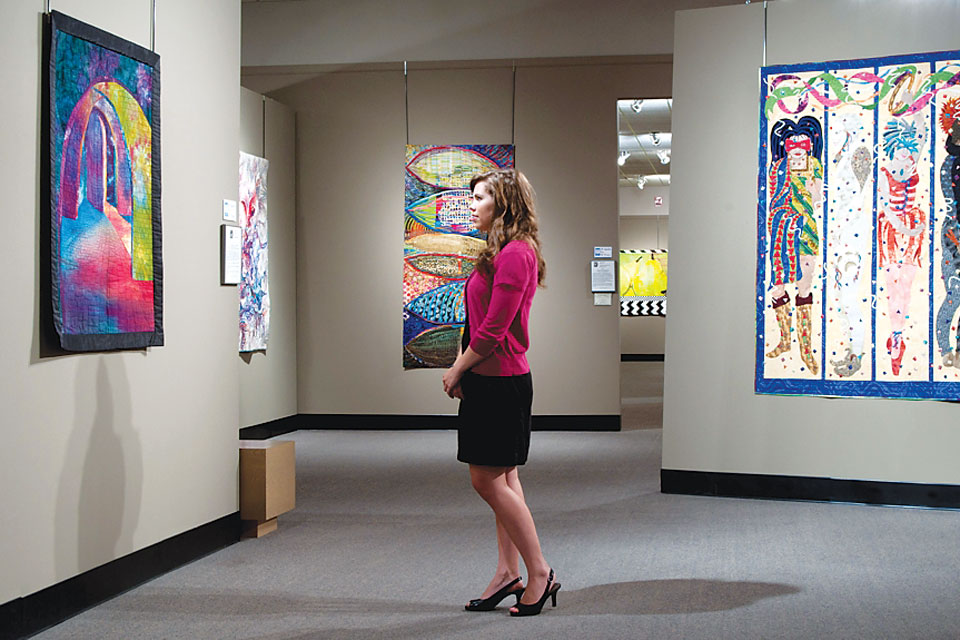 In the far-west notch of Kentucky known as the Jackson Purchase lies Paducah, a river town where a symphony, cinema and theater have helped shape the city’s reputation as an arts hub.

Then, there’s the National Quilt Museum, broadening not only Paducah’s creative reach but celebrating a distinctly American form of art. Launched in 1991 by Paducah locals Meredith and Bill Schroeder, the museum was founded with a mission to celebrate contemporary fiber artists and introduce them to a whole new audience.

“If I tell you that I’m going to the Louvre, you’re going to think about Monet and Rembrandt, but we don’t have a reference point for the best of the best in quilting yet,” says museum CEO Frank Bennett, citing a few famous names of the form such as Danny Amazonas, Hollis Chatelain and Mark L. Sherman. Bennett is quick to appreciate the tradition of quilting and the cozy geometry of a family heirloom is what many most often associate with the art form, but Bennett is also excited about what the medium can be.

Around 37,000 square feet of space houses a collection of 650 quilts, while the museum hosts rotating exhibitions and programming for the community that includes youth competitions, summer camps and adult workshops. Whether visitors are quilters or not, Bennett says they will be impressed by the artistry on display. 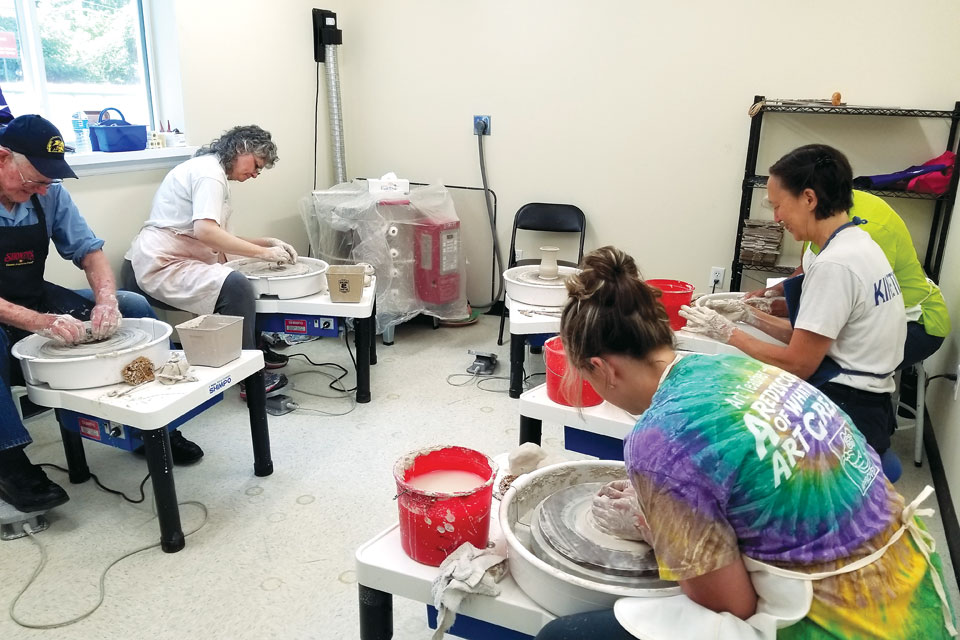 The Guild Train began chugging through Kentucky in 1961, with two cars that exhibited and demonstrated art forms such as quilting and pottery. For six years, this was how the Kentucky Guild of Artists and Craftsmen reached people: rolling in by rail and introducing would-be makers to a variety of ways to create.

The train was originally a collaboration between Berea College and the state of Kentucky, and when it stopped running, artists in Berea banded together to continue that original mission of fostering creativity.

“It was a fascinating time,” says Jeannette Rowlett, executive director of the Kentucky Guild of Artists and Craftsmen. “The bottom line is, art in Kentucky started here in Berea. It has just grown and grown and grown.”

Today, the organization represents over 250 artists, and while the train cars are long gone, the Guild operates from a building in Berea’s Olde Town Artisan Village. An art gallery, radio station and podcasting studio occupy the main floor, while local artists lead sessions on everything from painting to woodturning in the classrooms upstairs. The town itself is a makers’ hub, sporting a candle shop, a music store and artists’ studios — sometimes in unique nooks throughout downtown. 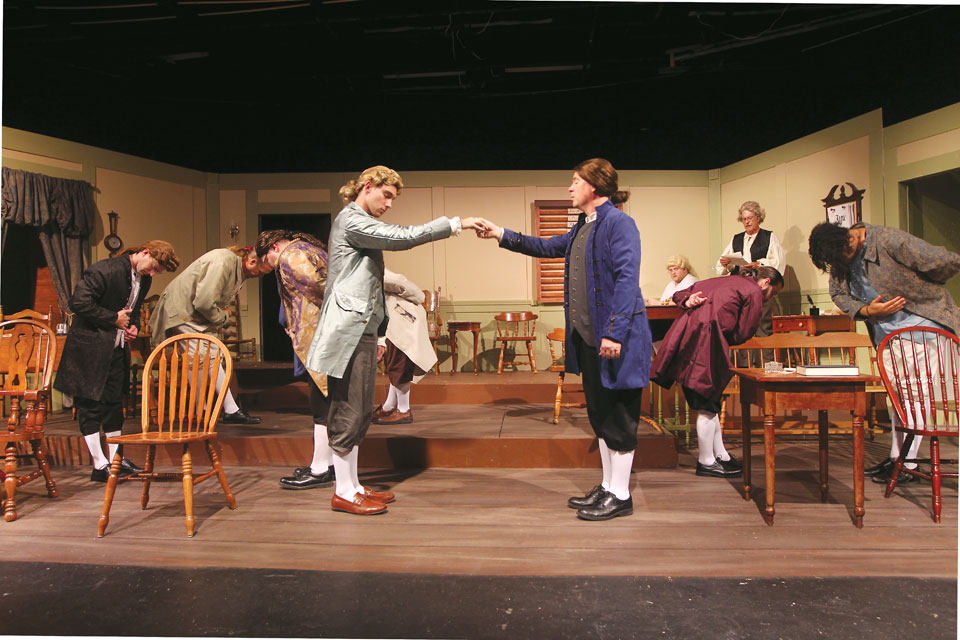 Murray’s Playhouse in the Park, Murray

The word theater frequently conjures images of bright lights, broad stages and plenty of seating, but not every production requires such grandeur. That’s the case with Murray’s Playhouse in the Park, which packs its cozy 141-seat house with audience members that love live performance.

“The building we’re in is a 1907 railroad depot,” says Lisa Cope, executive director of Murray’s Playhouse in the Park. In 1977, a group of local residents launched a plan for a community theater. After two seasons of staging performances in local church basements, they struck a deal for a permanent space. “They bought [the depot] for one dollar, cut it in half and moved it from downtown by the tracks to the park.”

Renovated to include a stage and stadium-style seating, the space is known for its intimate performances. Murray’s Playhouse in the Park stages six shows per year, but it also offers after-school programs for kids in kindergarten through high school and a Readers Theatre for senior citizens. (The flexible format doesn’t require actors to memorize lines while allowing them to flex their acting muscles.)

A Playhouse After Dark series makes room for less-traditional performances and the theater’s Penguin Project is part of a national initiative that works to bring kids with physical or cognitive disabilities to the stage.

“The kids have all the lines, they have all the solos, they do all the dancing, but they have a mentor on stage with them,” Cope explains. “It’s whatever kind of support our artists might need: It might be a physical thing. They might just need to have their lines whispered in their ear. Whatever it looks like.” 701 Gil Hopson Dr., Murray, Kentucky 42071, 270/759-1752, playhousemurray.org