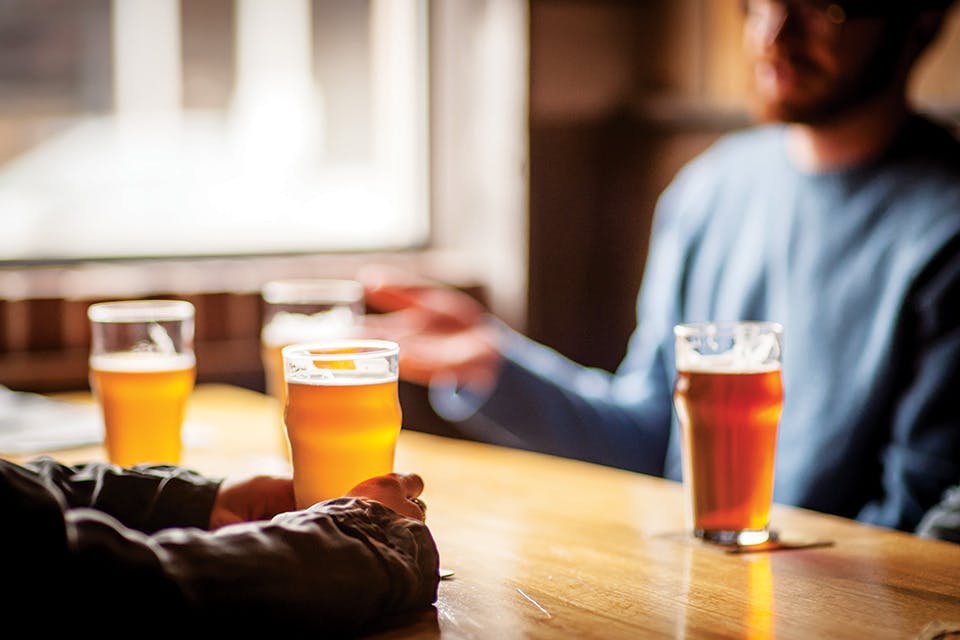 5 Michigan Breweries to Visit This Fall

If you’re heading north this fall, check out these breweries that show why beer is such a big deal in the Great Lakes State.

Tina Schuett fell in love with great beer while in Germany many years ago, and when she met up with Nate Crane, the pair decided to start a brewery in Traverse City, near the top of the Michigan mitten. They both love our wild feathered friends in addition to beer, and Rare Bird was born, opening in a red brick building built in 1931.

What’s on tap is always changing, featuring a constantly rotating list of beers from Schuett’s catalog.

“I have over 200 recipes I’ve developed and I am still adding new ones all the time,” she says. The brewpub has at least 10 of its own beers on tap at all times, including favorites like Kushy Punch IPA and El Guante Mexican Lager. Rare Bird also brings in guest taps from breweries near and far, as well as cocktails, ciders, wine and nonalcoholic beers.

Rare Bird Brewpub offers a little something for everyone, and that goes beyond what’s in your glass. The food menu is from-scratch and features items like truffle portobello fries, blackened mahi tacos and lamb burgers. 229 Lake Ave., Traverse City, Michigan 49684, 231/943-2053, rarebirdbrewpub.com

Bell’s Brewery was founded in 1988 from humble beginnings but is now the largest craft brewery in Michigan and one of the most revered in the country. Beers like Two Hearted Ale, a balanced IPA crafted with Centennial hops, have made the brewery a beloved fixture in American craft beer. Most Bell’s beer is brewed at a large production facility in Comstock, Michigan, but the Kalamazoo pub is still a comfy neighborhood joint with great food and great beer.

“The Eccentric Cafe is connected to our original brewery, which we still actively brew in today,” says Sterling Riethman, the pub’s marketing manager, adding that the food menu includes fresh, locally sourced ingredients. In addition to the Bell’s standards, visitors can enjoy one-off beers as well.

“On any given day, you will find an assortment of beers that are exclusive to the Eccentric Cafe, brewed right next door in that original brewery,” says Riethman.

The cafe is covered in artwork and beer memorabilia from founder Larry Bell’s travels around the world and has grown to include a large beer garden and both indoor and outdoor live music venues. 355 E. Kalamazoo Ave., Kalamazoo, Michigan 49007, 269/382-2332, bellsbeer.com 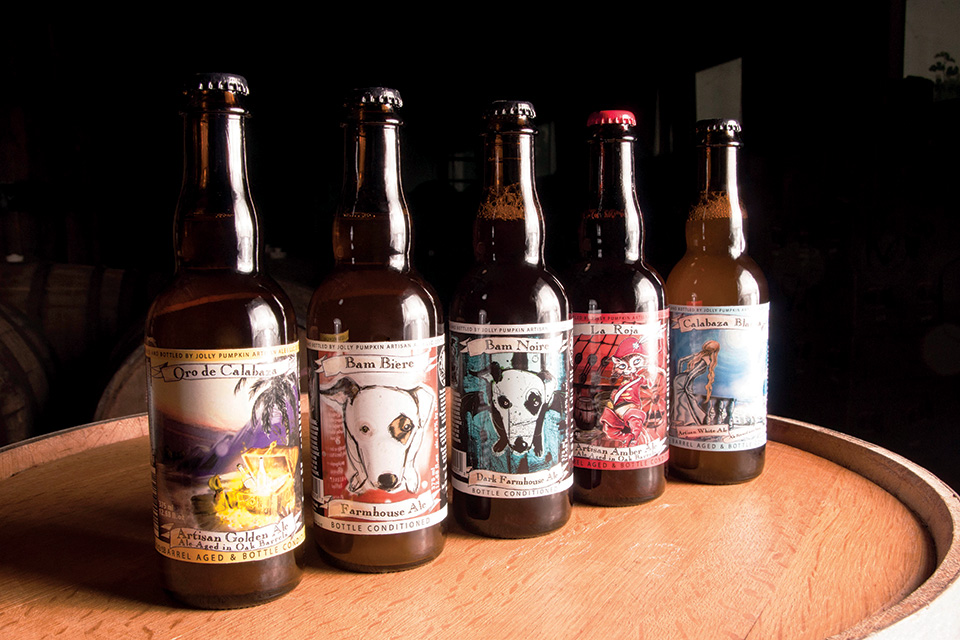 Jolly Pumpkin was the first brewery in America to brew exclusively sour and mixed-fermentation beers when it opened in 2004. It took some time for people to catch on to these unusual sour beers with their colorful artwork, but catch on they did. There are now eight Jolly Pumpkin brewpubs in Michigan, with the most accessible one to Ohioans located in downtown Ann Arbor.

Jolly Pumpkin maintains a decor theme that could best be described as “spooky tropics,” and the dimly lit brewpub housed in a two-story brick building on Main Street is full of surf memorabilia, beer label artwork and tiki-inspired accoutrements.

“The food is on the cutting edge of the very competitive Ann Arbor food scene,” says company CFO Tony Grant. The menu is filled with unexpected but delicious items like candied Brussels sprouts or potato and cheese crispy tacos, as well as pizzas made from a 100-year-old sourdough culture. Jolly Pumpkin’s beers pair great with the menu, but if sour isn’t your thing, you can also order conventional craft styles from sister brewery North Peak. 311 S. Main St., Ann Arbor, Michigan 48104, 734/913-2730, jollypumpkin.com

A trip through Europe inspired Jason and Kris Spaulding to bring a little bit of the continent to Grand Rapids in the form of Brewery Vivant. The old-world feeling is noticeable as soon as you walk through the front doors.

“We’re in a turn-of-the-century funeral home, so it has this cathedral feel,” explains Jason Spaulding. “It’s a bit like walking into a monastery.”

That sense of reverent tradition is echoed in the beer. The brewery is best known for expressive saisons that balance rusticity with refinement. It also offers IPAs, a Munich helles lager, a porter and a range of barrel-aged sour ales. Best of all, the food menu is on par with the beer.

“After traveling through France and Belgium, my wife and I were amazed how well the beer and food went together,” says Spaulding. “We wanted to re-create that here.”

The Keweenaw Peninsula, a finger of land sticking into the frigid waters of Lake Superior in the Upper Peninsula, can be a pretty extreme place to live, with long, cold winters buried under snow. Paul Boissevain, who founded Keweenaw Brewing Co. in the small town of Houghton, counters the jarring weather with easy-drinking beer and warm fires at his brewery’s taproom.

“We’ve been accused of making starter beers,” says Boissevain with a laugh. “We lean toward the lighter end of things.”

He points out their strongest beer is only about 7% ABV, and the brewery shies away from anything too aggressively hopped. It offers easy-drinking pub beers and sells them at a very friendly $3 a pint every day. The brewery and town thrive on two very different tourist seasons — summer and snowmobiling season — and beers like the bestselling Widow Maker Black Ale are perfect whether you’re coming in from a picnic on the beach or a trail ride in the snow.

The first craft brewery ever opened in the Upper Peninsula doesn’t serve food (you can order in) but it does offer a spacious deck for soaking up the sun or warming up around a campfire. 408 Sheldon Ave., Houghton Michigan 49931, 906/482-5596, kbc.beer