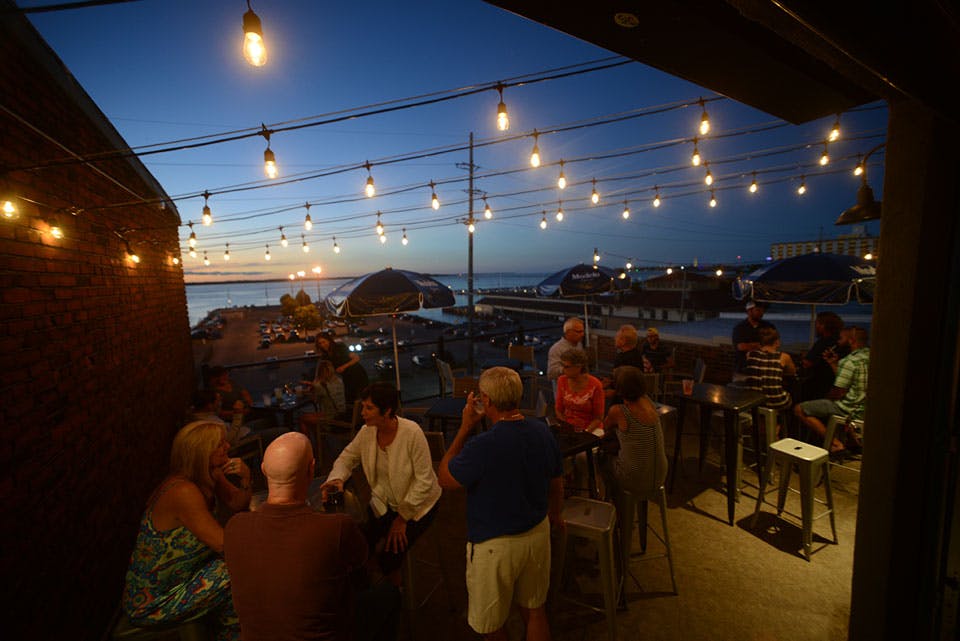 Welcome to some of Ohio’s finest lakeside restaurants, attractions and beach-town fun.

Joey Wolf takes hospitality seriously. The proprietor of South Bass Island’s Anchor Inn Boutique Hotel renovated a home into a cozy, four-room bed-and-breakfast in 2004. This year, she added five more guest rooms and remodeled the existing ones. “They all have lots of little… what I call treats,” says Wolf. “For example, we have towel warmers in all the rooms, and all the rooms have their own balconies with French doors.”

Each also has a king-size bed and nautical decor. In one room a sailcloth mounted on the wall conjures lake breezes. Another engages the beachcomber with a collection of beach glass.

Although South Bass Island is known for a lively atmosphere, the Anchor Inn is located in a neighborhood, allowing guests a respite from boisterous crowds. “It’s not a party hotel,” says Wolf. “It’s a very genteel, quiet place.”

Back on the mainland, Moseley’s Public House in downtown Sandusky’s Hotel Kilbourne is similarly refined, with owner Ryan Whaley aiming to bring a fun yet upscale watering hole to the city.

“We wanted both locals and tourists to interact with one another,” he says.

The menu spans local beer and wine as well as inventive cocktails, ranging from a house-made bloody mary to a black walnut Old-Fashioned. On the first floor, Moseley’s serves both drinks and a menu of shareable small plates, while the rooftop bar provides guests a chance to sip, socialize and enjoy the waterfront. “You get stunning views of Lake Erie and Cedar Point,” Whaley says.

In Bellevue, Tom Schwan is serving up barbecue at a dining spot that celebrated its one-year anniversary this spring. “Me and my dad had done a lot of barbecuing … we built our own smoker,” Schwan says of the origins of his Bone Boy’s BBQ & Catering — The Smokehouse.

Cooking for friends led to taking on catering clients, and for the past five years, Schwan and his wife and parents have worked weekends cooking for parties and events. When he needed a larger commercial kitchen, he found a former bar that fit. Today, Bone Boy’s BBQ is open five days a week, featuring family recipes and nods to Texas, Carolina, Kansas City and Tennessee barbecue styles.

Nearly 150 years old, Cedar Point has grown from a lakeside retreat to a 364-acre destination. But the amusement park is always evolving, and returning thrill seekers will find some not-so-subtle makeovers to some mainstay attractions, starting at the hotel check-in desk.

Formerly known as the Breakers Express Hotel, the renamed Cedar Point’s Express Hotel opens this year with more than just a different name.

Construction brought 69 new rooms, all of which are adjoining to accommodate families and groups. Plus, the addition of the new wing has improved the feel of the place, says McClure.

“Previously [the building] was kind of a U shape, so we just blocked off and connected the two wings across the back,” he explains. “It really makes the pool feel more exclusive.”

Once inside the park’s gates, those who want to cool off can look to the new Cedar Point Shores, an updated version of the former Soak City. The new splash zone boasts an extreme take on a waterslide for riders who meet the 48-inch height requirement.

“It wouldn’t be Cedar Point without the thrilling attraction. That’s where Point Plummet comes in,” says McClure. “[It’s] over 6 stories tall. [The attendant] puts you in a capsule, shuts the door and the floor drops out from under you.”

Younger swimmers can enjoy 12 pint-sized slides in Lakeside Landing, an area that caters to families with interactive elements and places for parents to hang out while the kids go from slide to slide.

But Cedar Point hasn’t limited itself only to the realms of rides and relaxation. This year, the park is debuting its Sports Force Parks, a complex of nine playing fields for visiting youth athletic teams to host tournament play.

“They’ve got the same kind of backstop netting you would find at a Major League stadium. The lights for night games are pro quality,” McClure says. “It’s just first class all the way.”

Plus, every player on a team’s roster gets a ticket to Cedar Point that is good for either five or eight days from the first use. “They’re able to go back and forth,” adds McClure, “play in their tournament and ride some coasters in between.” For more information about the new additions at Cedar Point, visit cedarpoint.com.

On Columbus Avenue in Sandusky, James Ervin and Richard Ries have cornered the market on a fun way to experience the city: from behind the controls of a Segway.

After a friend goaded Ervin into trying the two-wheeled electric vehicle, he was interested enough to keep riding. Soon, he was leading tours of his own in Columbus. “I’ve been on many [Segway] tours around the country and got hooked,” adds Ervin, co-owner of Sandusky Segwave.

He brought that enthusiasm with him to Sandusky, creating tours that inform and entertain. Groups of eight riders get a short lesson on how to use the machines before donning an earpiece and rolling through town. Stops include landmarks such as the Merry-Go-Round Museum.

“[It] opens their eyes to what Sandusky has to offer,” says Ervin. “People don’t know what’s in their backyard.”

“We’re located right on this cove that fills up with lily pads,” he says. “There’s a little island right outside our canal where there’s a bald eagle nest. ... You can paddle right around the island.”

Floro’s business rents canoes, kayaks and stand-up paddleboards. Each guest gets a lesson on the equipment before heading out on the water, where they can float around the canal or venture out onto the Portage River.

Back on land, the Erie County Historical Society has adapted a stroll through town into a brush with history, bringing visitors closer to the county’s past.

“We don’t have a museum,” explains John Hildebrandt, Erie County Historical Society trustee. “We decided to build a website and become storytellers of the county’s history — the county’s stories.”

That took the form of three self-guided walking tours accessible by mobile device from the society’s website. The tours offer photographs and information about downtown Sandusky and Washington Park, as well as the area’s ties to the Underground Railroad. (This summer, the historical society will include Kelleys Island and Milan, Ohio, tours.)

“You can stand at the foot of Columbus Avenue, look out over Sandusky Bay, hold out [your] phone ... and see images of what it looked like 100 years ago,” says Hildebrandt. “That’s one of my favorite spots on the downtown tour.” Sandusky Segwave, 107 Columbus Ave., Sandusky 44870, 419/734-9283, sanduskysegwave.com; Portage River Paddling Co., 3134 West Harbor Rd., Port Clinton 43452, 419/707-2285, facebook.com/portageriverpaddlingco; Erie County Historical Society, eriecountyohiohistory.com 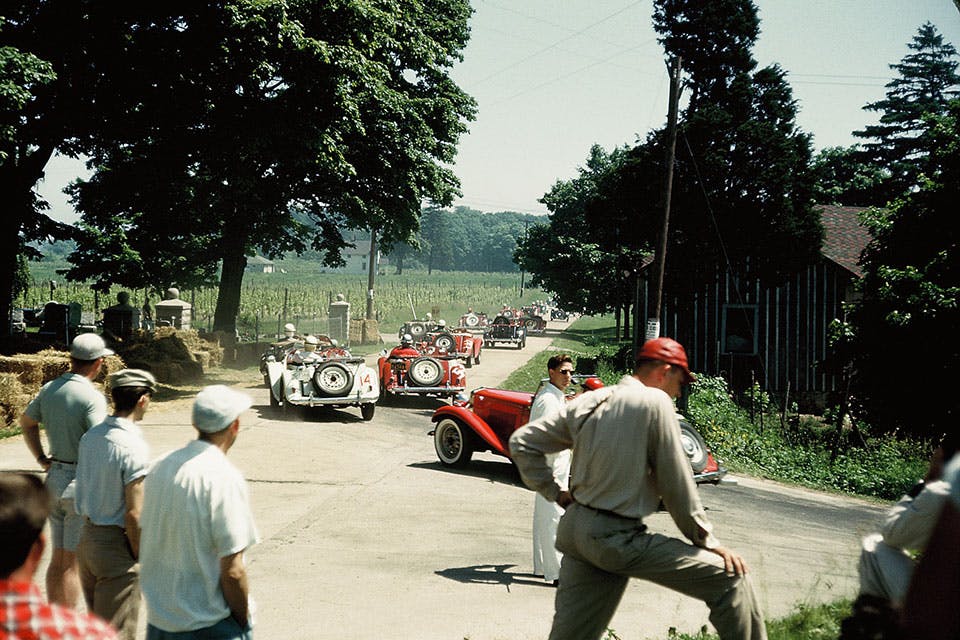 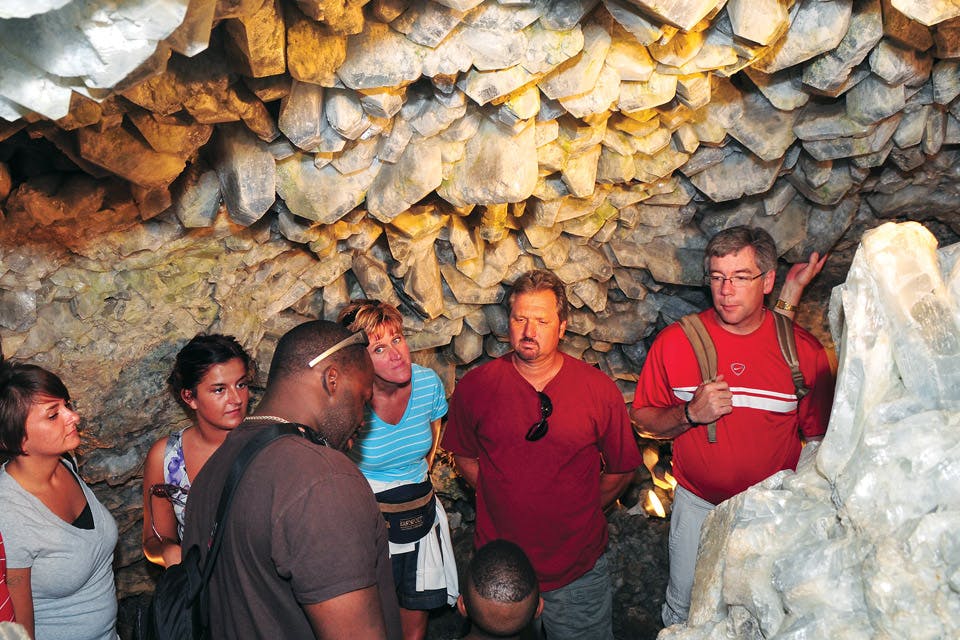 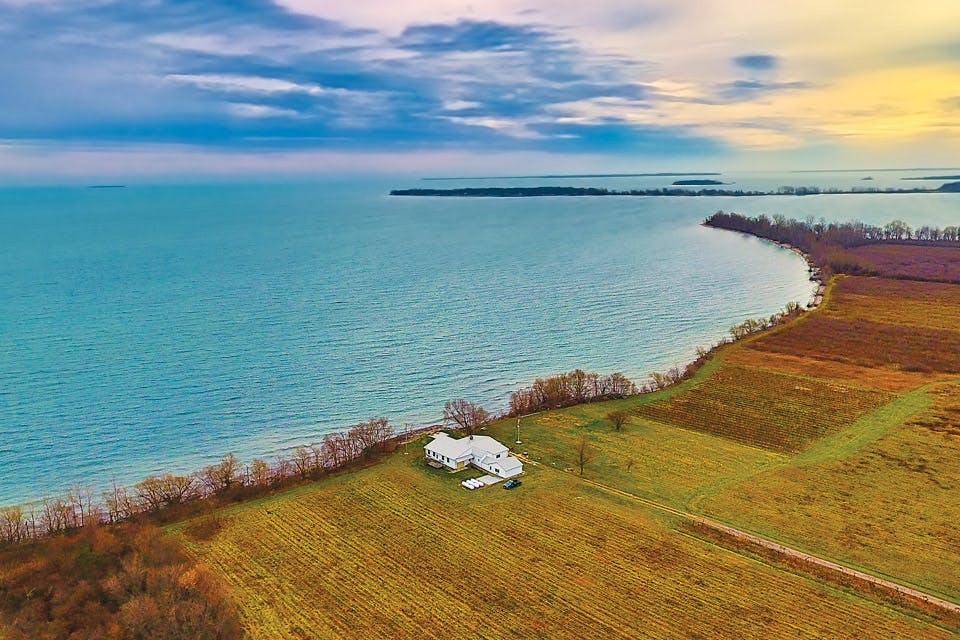