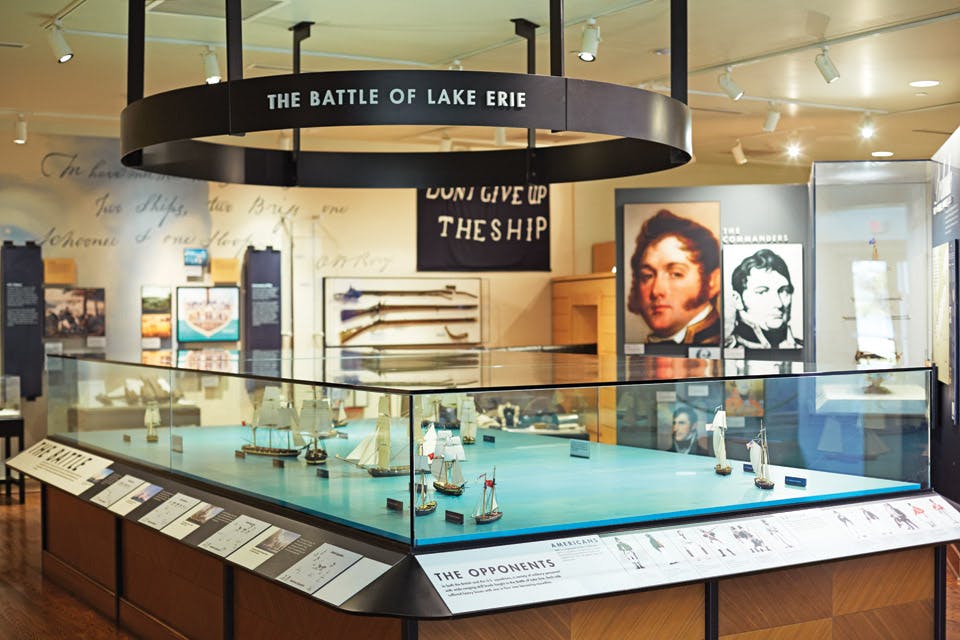 Whether you love nature, history or just hanging out, here are six ideas to get you started.

The 352-foot Perry Victory and International Peace Memorial stands watch over South Bass Island and the entire western basin of Lake Erie. It’s been one of the island’s most visible landmarks since its completion in 1915.

Dedicated to Oliver Hazard Perry, the victor of the War of 1812’s integral Battle of Lake Erie, the monument has always had a story to tell, and in 1936, the National Park Service stepped in to share it. A visitor center just 150 yards from the base of the column, which opened in 2002, provides a museum-like experience and multimedia lessons on the Battle of Lake Erie, including a detailed diorama of the final fight, complete with miniature ships floating on a painted blue lake.

“Those ships were built by a guy in Marblehead,” says Jeffrey Helmer, a National Park Service ranger at the monument. “It’s supposed to show the last few moments of the Battle of Lake Erie, when Perry breaks the line and cuts through.”

There’s a video that explains the events leading up to the War of 1812 through its aftermath, and rangers give talks on subjects relating to the war every hour. On weekends, guests have even more experiential options. “We do black-powder firings,” says Helmer, “musket-firing demonstrations every Friday, Saturday and Sunday. We even let [visitors] hold the muskets to see how heavy they are.” 93 Delaware Ave., Put-in-Bay 43456, 419/285-2184, nps.gov/pevi

Boaters tie up in droves at Put-in-Bay, which offers three public docks and several smaller, privately owned marinas. But popularity comes at a price and things can get crowded fast. As docks fill up at the South Bass Island hotspot, boaters looking for a quieter getaway can slip into the state-managed marina at Middle Bass Island: 184 slips tucked into wetland preserves on the eastern side of the island.

The state park system acquired the former Lonz marina in 2001 and later built out five piers and one wall (as well as one pier exclusively used by the Middle Bass Island Yacht Club).

“We find it’s more [for] the non-novices,” says Chris Zeitler, owner of J.F. Walleyes, one of only two such restaurant-bar resorts on Middle Bass Island. “[Boating] clubs and rendezvous come [here] because the facilities are so nice, clean, new, and they can do group functions without being in the hubbub that might be going on if they were to do it at Put-in-Bay.”

That’s not to say there’s an absence of activity on Middle Bass Island, especially for those who want to explore. “Middle Bass Island is a fall-in-love-with-nature island,” says Zeitler. With natural areas such as the Petersen Woods and Kuehnle Wildlife Area for hiking, fishing available on the breakwall and a small campground at the south end of the island, Middle Bass Island is a great spot to drift in, unplug and enjoy the peace.

Middle Bass Island is a boater’s paradise, but you don’t need to own your own vessel to enjoy it. The state park offers kayak rentals at the marina, allowing day-trippers to paddle to the exclusively water-accessible East Point Preserve, where they can go ashore and hike the foot trail. Middle Bass Island State Park Marina, 1719 Fox Rd., Middle Bass Island 43446, call 866/644-6727 for reservations, parks.ohiodnr.gov/middlebassisland 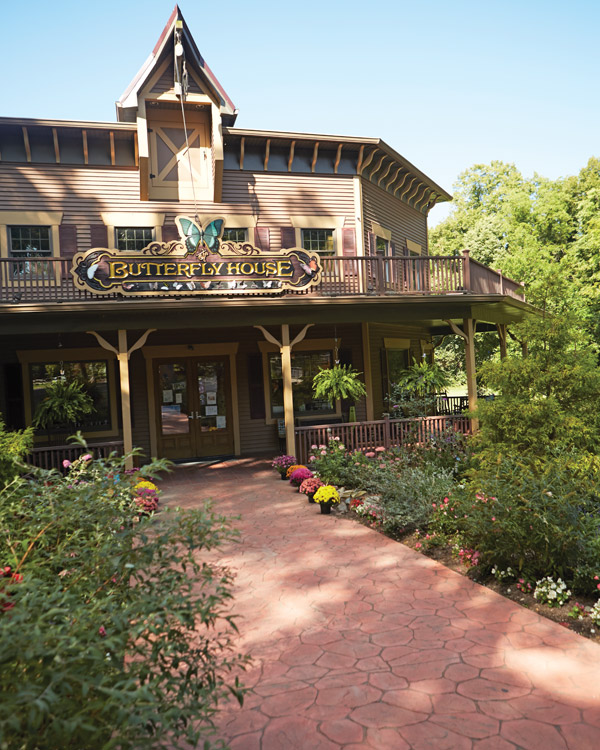 South Bass Island's Butterfly House at Perry’s Cave opened in 2004. Visitors can get step inside to get a closer look at colorful varieties from Costa Rica and Malaysia. (photo by Kevin Kopanski)

Tropical creatures with names like scarlet mormon and brown daggerwing flutter throughout this 4,000-square-foot glasshouse that features some of the most colorful details of Costa Rica and Malaysia.

Ever since the Butterfly House opened in 2004, Chuck and Carole Craigs have led visitor tours and tended to the weekly shipments of chrysalises. Upon the arrival of each new group, they glue each butterfly pupa to a piece of paper and place the paper over a clear plastic cup. “We have to hang the chrysalises upside down,” says Chuck, “because as a butterfly emerges, it’s so much bigger than the shell it comes out of, its wings have no room.”

For two to three hours, the wings unfold and dry out, a process that guests can watch through the transparent cups or in the cupboards that the Craigs use to house larger butterfly varieties. Over a season, they’ll raise nearly 80 species, including crowd favorites, such as the ethereal blue morpho.

The butterflies feast on plenty of nectar-rich plants and plates of fruit, and if you’re lucky (or wearing a perfume they like), they might land on you. But be careful not to touch them.

“They have tiny scales on their wings — like miniature solar panels,” explains Chuck. “They absorb sunlight and warmth. So any time we even accidentally touch butterflies, we knock scales off their wings and keep them from keeping their body warm enough to fly.” 979 Catawba Ave., Put-in-Bay 43456, 419/285-2283, perryscave.com

People aren’t the only tourists visiting Ohio’s Lake Erie islands. Over a third of the nearly 2,800 acres of Kelleys Island flourishes as undeveloped parkland, making it a popular landing pad for native and migratory birds.

Guests don’t need to wander far from the ferry station on the south end to find a spot to bust out the binoculars. In addition to hundreds of acres of state park, there are several preserves on the island owned by the Cleveland Museum of Natural History.

“There’s a lot of area that’s good not only for [bird] breeding, but migration, all easily accessible to the public,” says Thomas Bartlett, a research associate with the Cleveland Museum of Natural History. “The North Pond is a good area; you walk through a woods, and then you get to a marshy area and you’ve got beach shoreline right there,” he says.

Bartlett bands birds on the islands throughout the year (he’s banded more than 100 species since 1996), and he knows some of the best spots for watching warblers, terns, ducks and gulls aren’t necessarily tucked into the trees. According to Bartlett, a driver recently spied a crested caracara — the first documented appearance of the bird in the state — from Titus Road.

“It’s killing me, because I had left the island two days before it was seen,” Bartlett says. For more information about the Cleveland Museum of Natural History’s bird sanctuaries on the island, visit cmnh.org/kelleys-island.

After the ladder trucks moved out in the early 1990s, Put-in-Bay’s former fire station went up for auction. That summer, Carl and Chris Krueger went home with a two-bay firehouse. The next year, in 1995, they used half of the building to open a T-shirt shop, but they didn’t stop with souvenirs.

“The following summer, we decided that we would do something in the other half of the building,” says Chris, co-owner of the Put-in-Bay Brewing Co. “There wasn’t a brewery here, and it was cool to think about being the first one. We’re still the only one.”

From May through the middle of October, Chris and her husband brew eight recipes, offering six on tap at a time, from the popular Summer Brew to the Pass Out Bourbon Stout and the Ole Cotton Top Irish Red. They sell growlers, but the brews here are a seasonal treat. The Kruegers don’t bottle their beers.

If you need some nibbles, the brewery offers standard pub fare, as well as some noteworthy pizzas. 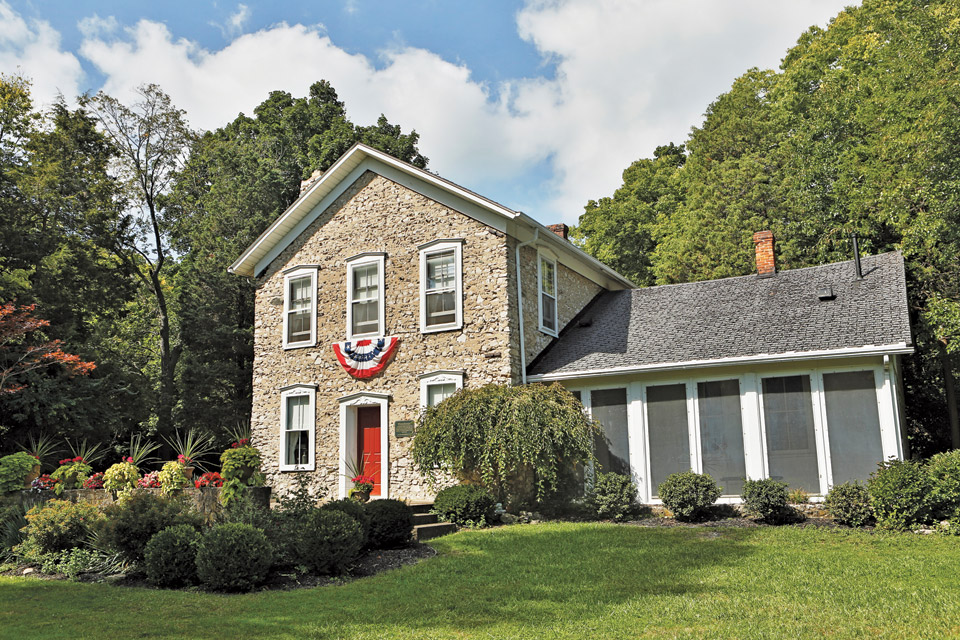 Stonehenge Estate was a private residence until Katherine and Ken Benjamin opened the residence to the public in 1989. Visiting offers a glimpse of what island life was like a century ago. (photo by Kevin Kopanski)

Three families called South Bass Island’s Stonehenge Estate home before Katherine and Ken Benjamin bought the property in 1979. The farmhouse, barn and wine press cottage were more than 100 years old at the time, so the couple — meaning to make the estate their retirement home — started renovations.

As they restored the old home and vineyard, however, Katherine and her husband attracted quite a bit of local and visitor attention, and in 1989, the Benjamins opened Stonehenge up to the public.

Guests wander a short trail to the barn, now the estate’s gift shop, where they can purchase a self-guided audio tour of the property. “The property is kind of representative of what the island used to be: little 20-to-30 acre farms and wineries,” explains Lisa Benjamin, who runs the business with her parents. “Everybody grew their own grapes and made their own wine.”

The vineyard at Stonehenge no longer produces wine, but the Benjamins have taken care to conserve the history of the place and offer a break from the beat of modern life. “You come in and decompress from the crowds on the island,” says Lisa.

Guests can explore the cottage (the old wine press is still in the basement), tour the stone farmhouse, walk the grounds and return again to the gift shop for a reminder of island days gone by. 808 Langram Rd., Put-in-Bay 43456, 419/285-2585, stonehenge-put-in-bay.com