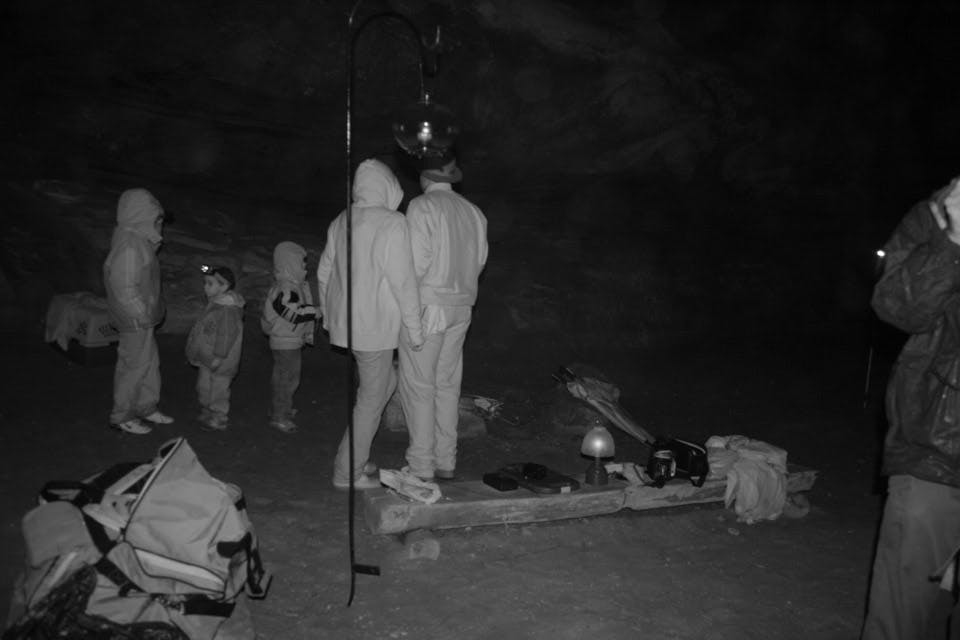 Spirits of the Hills

Ghostly Footsteps
Want to put a chill in your season? Try one of these tours.

People have explored the cliffs and gorges of the Hocking Hills for eons, and it’s said the spirits of some still roam its landscape. Reports of drumbeats reverberating off rocks and ghostly sightings have made the southeast Ohio adventure spot a ghost-hunter favorite as well.

Haunted tales tied to the area include a ghostly 1950s white sedan with a flat tire that’s been seen along the side of the road, not far from the Ash Cave parking area. Sightings of a White Lady have been reported during night hikes to the 700-foot-wide, 100-foot-high recess cave. It’s said the brown-haired and barefoot woman wearing a 1940s-era floral dress never makes a sound, only observes.

“There were about a dozen of us [one night], and on the way back out we stopped to talk about a 300- to 400-year-old beech tree, and we were looking at that. When I turned around, she was standing about 5 feet behind the group,” says Quackenbush. Check the list of naturalist events atparks.ohiodnr.gov/hockinghills for hikes or call 740/385-6842.

A strange energy flows through Marietta, Ohio’s oldest organized municipality. Once a rough and bustling riverfront filled with bars and houses of ill repute, the town witnessed catastrophic flooding and gruesome deaths over the years.

“A lot of the old architecture from the 1800s is still here, and I think somehow it holds the echoes of things that have happened,” says Lynne Sturtevant, owner of Hidden Marietta, a tour company focused on local history.

Beginning at the fountain on Front Street, the 2-hour, mile-long Hidden Marietta Ghost Trek ventures along brick streets and alleys, leading to the site of an 1826 property where it’s said spirits of an infamous murder linger.

Stories buried in architectural history are unearthed at the Lafayette Hotel, which rests on the grounds of a Victorian palace that burnt down in the 1890s. It is said the home’s former occupants still haunt the site of their one-time residence. The tour’s final stop is the 1900 Marietta Sanitarium.

Echoes of the past still resonate strongly through the village of Hanoverton, where the 1848 Sandy & Beaver Canal creates a landscape that lends itself perfectly to historical ghost walks. “The ghosts and our ancestors are a part of who we are today,” says Jean Hendricks, owner of the History, Haunts and Legend Tour, a business that opened in 2010. “We’ve got to appreciate ... how hard they worked.”

Beginning at the 1837 Spread Eagle Tavern, whose customers have included presidents Abraham Lincoln and William McKinley, this 90-minute walk traverses historic Plymouth Street, making stops at the 1817 home of Dr. James Robertson, who gave refuge to those traveling the Underground Railroad.

Beyond the history are reports of paranormal activity at both Grove Hill Cemetery and a renovated 1888 schoolhouse. Sightings of a 14-year-old boy wearing flannel and suspenders have been reported. “People thought he was a real person,” says Hendricks, “but he wasn’t.” Tours are held the first and third Sat. of each month at 8:15 p.m. during July and August and every Sat. night at 7:15 p.m. during October. Adults $8, kids 10 and younger free. 10150 Plymouth St., Hanoverton 44423, 330/205-5103, hhltours.com


Lantern Tour of the Ghosts of Zoar | Tuscarawas County

Settled in 1817 by German separatists, it’s said the small town of Zoar is still inhabited by peaceful spirits of the pacifist community that lived here until 1898.

“Any time that you’ve got old buildings, you’re going to have strange sounds, strange smells, doors that swing open,” says Betty O’Neill-Roderick, author of The Ghosts of Zoar, Ohio and tour guide for Lantern Tour of the Ghosts of Zoar. The one-hour tour has drawn visitors for 18 years.

Stops include the 1833 Zoar Hotel, which has sat vacant since 1974 but once bustled with parties thrown by wealthy industrialist Alexander Gunn during the 1880s. “You can imagine the disruptive force he was in this religious society,” says O’Neill-Roderick.

Weeping has been reported from the old boys dormitory, where children lived apart from their parents. It’s also said the ghost of a Cleveland physician roams his former residence, now the privately owned Cowger House.

Proof Positive
From a 100-year-old moonshine recipe to grape-based vodka, sample a taste of Ohio at these distilleries

The mines near New Straitsville were set on fire by angry coal miners 131 years ago, and it’s said those flames still burn deep inside the earth to this day. With their form of employment up in smoke, locals took to making moonshine and hiding their liquor stills in the woods.

“We had all these mine fires and smoke going through the valleys and on the hills,” says Doug Nutter, owner of Straitsville Special Moonshine. “That was the perfect camouflage.”

Bootleggers also benefited from the area’s spring water, which gave the moonshine a distinct flavor that became known far beyond southeast Ohio. “If you were in Chicago during Prohibition,” Nutter says, “and you walked into a speakeasy and asked for a glass of whiskey, the bartender would ask: Do you want the local stuff, or do you want Straitsville Special?”

That’s how Nutter picked the name for his distillery, which opened in 2014. “The recipe we’re running is a little over 100 years old,” he says.

Flavors are in development, including cherry, raspberry and peach, and visitors are welcome to drop by Nutter’s storefront for a tour and moonshine pointers.

Kelly Sauber started his career as a professional brewer nearly two decades ago, and he sees his Fifth Element Spirits distillery as an outgrowth of that beer-making past. “If you can’t make a good beer, you can’t distill it into a fine whiskey,” he explains. “It was just a natural progression after brewing.”

Based in Shade, Ohio, just outside of Athens, Sauber fashions gin, vodka and brandies with a distinctly southern Ohio pedigree. “About 85 percent of everything we use is grown within 22 miles,” he says. Corn, sorghum, grapes, pawpaw and elderberries come from local farmers, and Sauber uses foraged materials as well. In addition to juniper, rose hips, corn and barley, he adds a wild-harvested fifth element to his gin. “The spicebush berry is our main botanical,” he says.

Even the beans Sauber cold brews into his coffee liqueur come from a local roaster. Curious visitors are welcome to schedule a tour at the distillery, but if you’re just looking to sample the spirits, the West End Ciderhouse in Athens — owned and operated by Sauber’s wife — serves Fifth Element’s handiwork in its cocktails. Try the Porch Swing, a twirl of Pimm’s, cucumber, simple syrup, lemon and Fifth Element spicebush gin. 41496 Bearwallow Ridge Rd., Shade 45776, 740/696-1159, westendciderhouse.weebly.com/fifth-element-spirits.html

Northeast Ohio’s lakeshore communities are deeply rooted in viniculture, and for more than 22 years, Gene Sigel has been a part of Geneva’s wine industry. In 2012, the South River Vineyard owner became a pioneer in Ohio’s blossoming world of distilling, too, when he opened Red Eagle Distillery and began making vodka, bourbon, rye and brandy.

Sigel’s aim is not just to distill liquor but also to dispel some common liquor lore. “We make vodka from Concord grapes grown on my farm,” he says, explaining that while commonly made with potatoes, vodka can actually derive from rye, wheat, corn, grapes and even pure cane.

Also, that rule about bourbon coming only from Kentucky isn’t true. “It’s a misnomer,” he says. “Bourbon’s an American term. The only two requirements are, beyond being made in the United States, that it’s stored in a new charred oak barrel and that it’s a mash that’s 51 percent corn.”

Wine country tourists can stop in to Red Eagle Distillery to sample his work. Sigel has renovated the red timber frame barn housing his distillery to include a sleek wooden tasting room and bar that offers a seasonal menu of cocktails highlighting house spirits. 6202 South River Rd., Geneva 44041, 440/466-6604, redeaglespirits.com

For Bill Candella, curiosity and restlessness filtered down into a winning business. The owner of Candella Micro-Distillery was looking for a new project following his 40 years at AT&T.

“I tried retirement,” he says with a laugh. “That didn’t work. After about a month, I was absolutely bored to death.”

In 2013, after researching liquor laws and reading about the distilling process (as well as recruiting his brothers to help), he opened Candella Micro-Distillery in Boardman. Just two years later, Candella’s Y-town Vodka has won awards from the American Distilling Institute, including a Best of Class distinction in 2014.

Although many distillers rely on grains or potatoes to create their vodkas, Candella distills from cane sugar. “You can take any plant out there,” he explains. “If you can pull the starches out of the plant, you can make an alcohol out of it. We just go right to the pure cane.”

Y-town Vodka is Candella’s only product for the time being (and it’s currently available in select liquor stores throughout the state), but he has plans for some twists on the clear spirit — one that involves a little American oak.

“We’re coming out with a barreled vodka,” he says. “We’re resting it so we pull out some of the caramel flavor and a vanilla flavor out of the barrel. It gets a little color to it. Rather than adding a syrup, we’re doing it the natural way.” Tours available by appointment. 338 McClurg Rd., Boardman 44512, 330/518-5006, candellamicro-distillery.com