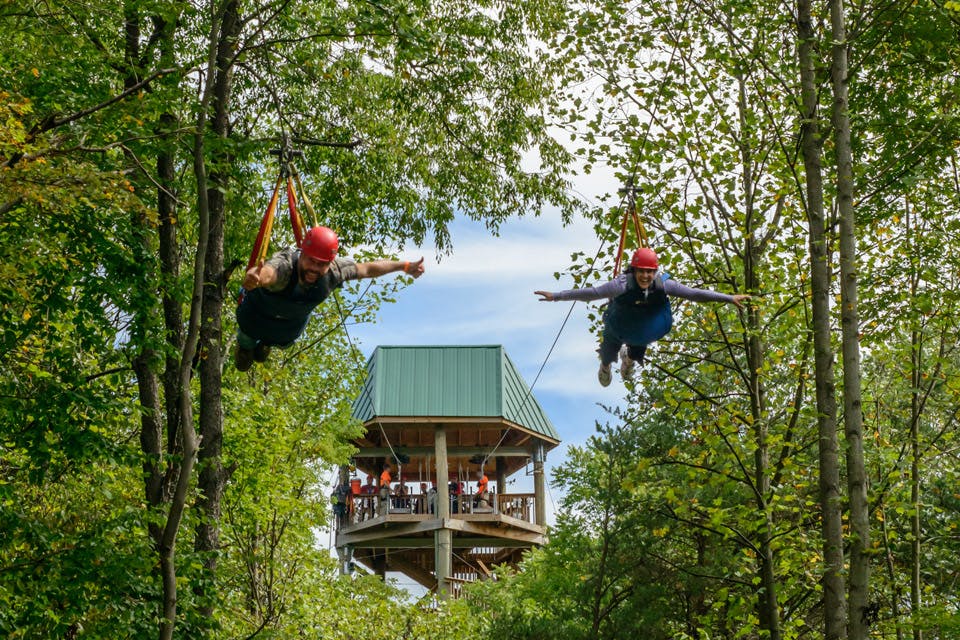 A trip to southeast Ohio offers ways to experience nature and adventure like few other places in the Buckeye State.

Deep gorges and hulking rock formations get a lot of the attention. But the Hocking Hills region is also home to plant and animal species that make the place unlike any other part of Ohio. “Hocking Hills is where Northern Canada meets Southern Appalachia,” explains Hocking Hills State Park naturalist Pat Quackenbush. “If you’re down in the gorge, it’s going to remind you a lot of [Canada] — like hemlocks, birch trees, those species there — but when you come up out of the gorge into the hills, you go into Southern Appalachia, [a] Smoky Mountains-type hardwood forest …  You can get Tennessee all the way to Canada in one hike.” Couple that with outdoor adventures such as ziplining, and you have getaways that will transport you to a wild, more natural place, no matter the level of adventure desired.

1. Cantwell Cliffs: This most remote of Hocking Hills State Park trails offers two options when visiting the nearly 150-foot cliffs: Traverse a loop along a narrow path at the base of the cliffs or take on the trails along the rim. The trails are undeveloped, forcing visitors to take their time. “[It’s] not just a hike,” says Mimi Morrison, guide and owner of Touch the Earth Adventures. “It is about absorbing the quiet nature that is there.” Hocking Hills State Park, located off St. Rte. 374, Rockbridge 43149, parks.ohiodnr.gov/hockinghills

2. Conkle’s Hollow: Sandstone walls rise nearly 200 feet at this state nature preserve that features a half-mile, wheelchair-accessible concrete pathway leading to a waterfall. There’s also a longer upper-rim hike accessed via stairs that offers stunning views of the surrounding forest. “What makes these gorges unique is the fact that they are a microclimate that is always cooler than outside the gorge,” notes retired naturalist Paul Knoop, who lives right next door. “There are plants and animals that live in these cool spots that won’t live outside the gorge.” 24858 Big Pine Rd., Rockbridge 43149 ohiodnr.gov

3. Old Man’s Cave: The most-visited spot in Hocking Hills State Park is home to four waterfalls and must-see rock formations. “You get a little bit of all of the best geology in the park at Old Man’s Cave,” notes naturalist Pat Quackenbush. Broken Rock Falls is found at the end of a trail off of the Lower Falls. It is a less-hiked area for those seeking solitude at this busy spot. Hocking Hills State Park, located off St. Rte. 664, Logan 43138, parks.ohiodnr.gov/hockinghills

4. Ash Cave: Any visit to the Hocking Hills should include a stop at this huge  natural amphitheater created by a rock overhang. Like Conkle’s Hollow, a paved path provides visitors easy access to the natural wonder. Shawnee and Wyandot Native Americans once held ceremonies here. Much later, a Baptist minister brought his congregation and delivered his service from the 15-foot pulpit rock. “There is [so much history] and it’s amazing to see,” says Eric Hoffman, nature photographer and Friends of Hocking Hills board member. Hocking Hills State Park, located off St. Rte. 56, South Bloomingville 43152, parks.ohiodnr.gov/hockinghills

5. Hocking Hills Canopy Tours: Head into the air to experience the wildlife and flora from above at this zip-line spot. “You get that thrill and that adventure of being up there 80 feet in the air zipping,” says tour guide Brian Snider. “But then there’s being able to learn about nature and the history of the area while you’re up there.” Groups of two to nine people zip along 10 zip lines and across five bridges, ending with a 25-foot rappel. 10714 Jackson St., Rockbridge 43149, 740/385-9477, hockinghillscanopytours.com