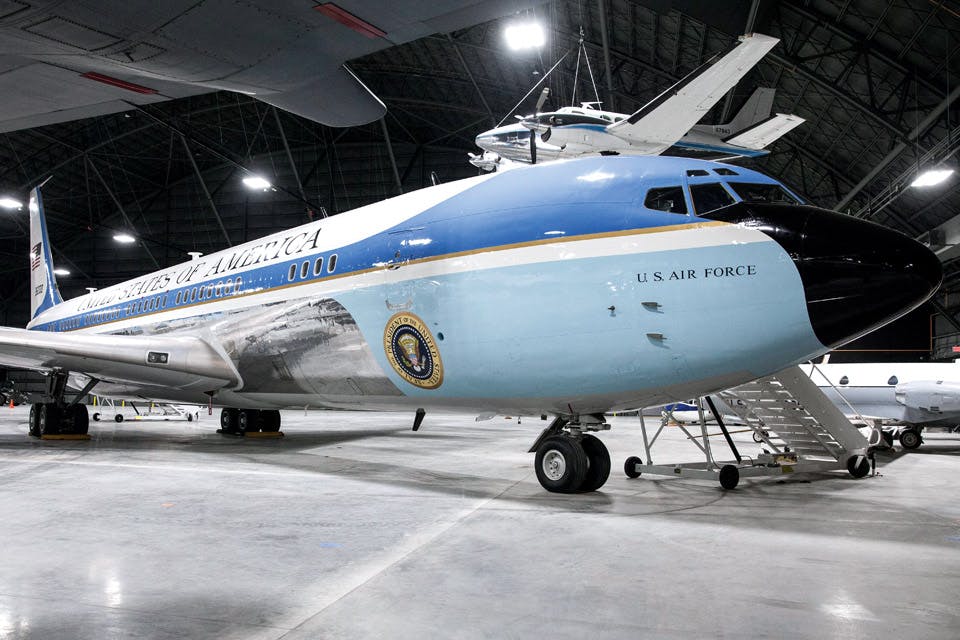 Along with other pieces of history, the new fourth building houses presidential aircraft, including the Air Force One that served presidents Kennedy through Clinton.

For years, only a fraction of the visitors who made the trip to the National Museum of the United States Air Force got the opportunity to see one of the world’s most famous airplanes. It was housed in a hangar behind the gates at Wright-Patterson Air Force Base a short shuttle ride away, but many days all of the available seats would be spoken for within 15 minutes of the museum opening its doors.

From the moment one glimpses the Boeing VC-137C SAM 26000, the sense of history it carries with it is palpable. Of course, most of us refer to it by a different name: Air Force One.

The SAM 26000 was the first jet aircraft specifically built for the President of the United States. It carried John F. Kennedy to Dallas in November of 1963 and ferried his body back to Washington D.C. following his assassination. In February 1972, it transported Richard Nixon to the People’s Republic of China for a meeting that was vital to normalizing relations with the country. The plane continued to serve presidents through Bill Clinton before it was retired in 1998.

But for years, there wasn’t space inside the museum to display this important piece of American history, so not all visitors could see it and experience what it is like to walk through its cabin. That changes June 8 with the opening of the museum’s fourth building — a $40.8 million, 224,000-square-foot space that showcases not only SAM 26000 and other presidential planes, but also experimental aircraft, spacecraft and the trainer used to prepare space shuttle astronauts for their missions. The addition also includes STEM learning nodes.

“The building was paid for in full by our Air Force Museum Foundation,” says retired Lt. Gen. Jack Hudson, director of the museum. “The way it works is, they donate the money to the Air Force, the Army Corps of Engineers administers the contract for the new building, it gets done and then the Air Force picks up the utility bill. It’s a heck of a deal.”

The National Museum of the U.S. Air Force opens a new building about once every 15 years, so the unveiling is a significant milestone for the institution. The new area houses the Space, Global Reach, Presidential, and Research and Development galleries. But looking out across the collection from the building’s mezzanine level, one huge aircraft stands out above the rest: The North American XB-70 Valkyrie.

One of the 42 aircraft in the Research and Development Gallery, the 185-foot plane has a long, pointed nose, a 105-foot wingspan and six huge engines, which each generate an impressive 28,000 pounds of thrust.

“To put it into context, it flew three times the speed of sound in 1965, and that was before the first episode of “Star Trek” aired,” says curator Jeff Duford, explaining that only two were built and one was destroyed in a midair collision. “It really looks like something that could have been in ‘Star Trek.’ ”

The Space Shuttle Crew Compartment Trainer in which all space shuttle astronauts — at one time or another — prepared for their missions anchors the neighboring Space Gallery.

“This is where they learned so-called switchology: what switch does what, when to throw it and why, and in what combinations,” says curator Doug Lantry. “Visitors can see the flight deck and also the mid-deck, which is the living, eating, experimentation area. It also features the space shuttle bathroom, which everybody wants to see, especially our middle school visitors.”

The Global Reach Gallery showcases the capability to traverse the globe that the United States Air Force has implemented since World War II. From air refueling to passenger and cargo transports, this gallery highlights the mobility of the Air Force and its importance to the nation’s military power by highlighting some of the museum’s largest aircraft.

The neighboring Presidential Gallery showcases a different type of global reach: safely transporting the President of the United States around the world. It will undoubtedly be one of the most talked about parts of the expansion. In fact, the planes the museum’s more than 1 million annual visitors will be able to walk through were reinforced with diamond-plate flooring to stand up to the traffic.

The Presidential Gallery features 10 aircraft. Along with Kennedy’s Air Force One, it includes the Douglas VC-54C Skymaster, the first aircraft purpose-built to fly the President of the United States. Nicknamed the Sacred Cow, it carried Franklin D. Roosevelt to the Yalta Conference in 1945 and later served as Harry S. Truman’s personal transport.

Truman’s Douglas VC-118, named Independence after his Missouri hometown, is also included in the gallery, as is Dwight Eisenhower’s Lockheed VC-121E Constellation. It was nicknamed Columbine III after the state flower of Colorado and in honor of his wife.

“Our gallery will consist of 10 aircraft spanning more than 70 years of presidential and executive airlift. This mission is one of the Air Force’s most critical, most visible and most important,” says curator Christina Douglass. “Everyone who comes to our museum will have the opportunity to see these aircraft now. … People won’t be disappointed because they didn’t get on a tour. We’re very excited everyone will have an opportunity to walk through them.”

The new building opens June 8 and grand opening activities are planned for June 11–12. Visit nationalmuseum.af.mil for more information. Admission to the museum is free. It is located at 1100 Spaatz St., Wright-Patterson AFB 45433.